In a message published on Twitter, Saint Kitts and Nevis Prime Minister Timothy Harris announced that a Cuban medical team is arriving at the country to help cure the COVID-19 cases and prevent their increase.

To date, the Caribbean nation has reported that seven people contracted the virus. No deaths were registered so far.

The coronavirus outbreak has not spared the Caribbean region which is starting to feel the social and economic consequences of the epidemic with the shut down of tourism in particular.

Governments across the region have been ordering residents to stay at home in an effort to contain the rapid spread of the deadly disease, while most of the islands have imposed travel bans.

Since the outbreak began, Cuba has been at the frontline of the fight against the pandemic, sending doctors and nurses to Caribbean nations and to more others worldwide.

In the Carribbean, so far Cuba has sent teams to Jamaica, St. Vincent and the Grenadines, Grenada, Suriname, Antigua and Barbuda, Belize, St. Lucia, Dominica, St. Kitts and Nevis. 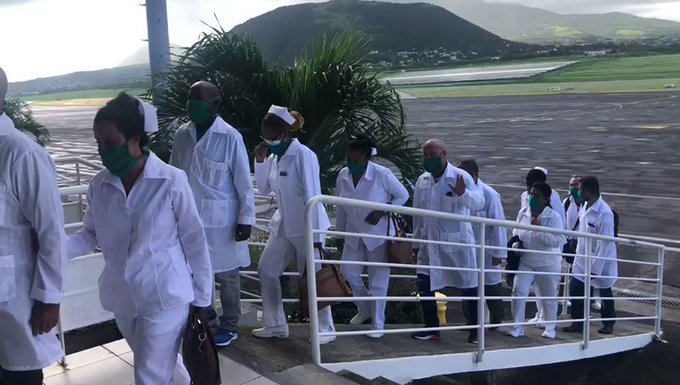 870 people are talking about this

Despite sanctions and a decade-long economic embargo imposed by the United States, Cuba could send medical brigades even to European nations such as Italy.

“It just goes to the history of Cuba’s deep and long-lasting commitment to humanitarian solidarity with other countries,” Peter Kornbluh, director of the Cuba Documentation Project at the National Security Archive at George Washington University told Democracy Now.

“We are in a fight against a common enemy, and Cuba is a country that can make a significant contribution to that struggle. And Cuba should not be hamstrung and handicapped by U.S. sanctions,” Kornbluh said.