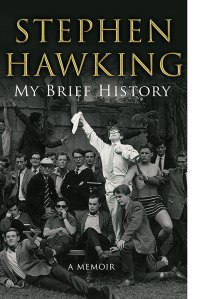 For the first time, Stephen Hawking turns his gaze inward for a revealing look at his own life and intellectual evolution.

My Brief History recounts Stephen Hawking’s improbable journey, from his post-war London boyhood to his years of international acclaim and celebrity. Illustrated with rarely seen photographs, this concise, witty and candid account introduces readers to the inquisitive schoolboy whose classmates nicknamed him ‘Einstein’; the jokester who once placed a bet with a colleague over the existence of a black hole; and the young husband and father striving to gain a foothold in the world of academia.

Writing with humility and humour, Hawking opens up about the challenges that confronted him following his diagnosis of ALS aged twenty-one. Tracing his development as a thinker, he explains how the prospect of an early death urged him onward through numerous intellectual breakthroughs, and talks about the genesis of his masterpiece A Brief History of Time – one of the iconic books of the twentieth century.