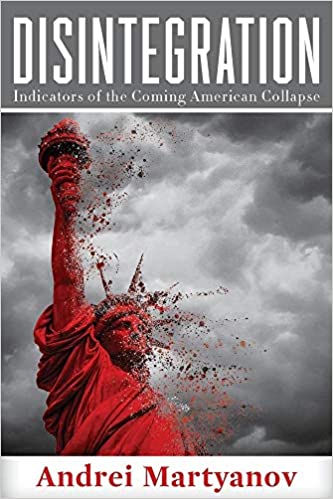 Then came The (Real) Revolution in Military Affairs, where he went one step beyond, explaining how this “revolution”, introduced at the Pentagon by the late Andrew Marshall, a.k.a. Yoda, the de facto inventor of the “pivot to Asia” concept, was in fact designed by Soviet military theoreticians way back in the 1970s, as MTR (Military-Technological Revolution).

His new book, Disintegration, completes a trilogy. And it’s a stunning departure.

Here, Martyanov, in meticulous detail, analyzes the imperial decline thematically – with chapters on Consumption, Geoeconomics, Energy, Losing the Arms Race, among others, composing a devastating indictment especially of toxic D.C. lobbies and the prevailing political mediocrity across the Beltway. What is laid bare for the reader is the complex interplay of forces that are driving the political, ideological, economic, cultural and military American chaos.

Chapter 3, on Geoeconomics, is a joy ride. Martyanov shows how geoeconomics as a field separate from warfare and geopolitics is nothing but an obfuscation racket: good old conflict “wrapped in the thin shroud of political sciences’ shallow intellectualism” – the stuff Huntington, Fukuyama and Brzezinski’s dreams are made of.

That is fully developed on Chapter 6, on Western Elites – complete with a scathing debunking of the “myth of Henry Kissinger”: “just another American exceptionalist, mislabeled a ‘realist’”, part of a gang that “is not conditioned to think multi-dimensionally”. After all they’re still not capable of understanding the rationale and the implications of Putin’s 2007 Munich speech that declared the unipolar moment – a crude euphemism for Hegemony – dead and buried.

How not to win wars

One of Martyanov’s key assessments is that having lost the arms race and every single war it unleashed in the 21st century – as the record shows – geoeconomics is essentially an “euphemism for America’s non-stop sanctions and attempts to sabotage the economies of any nation capable of competing with the United States” (see, for instance, the ongoing Nord Stream 2 saga). This is “the only tool” (his italics) the US is using trying to halt its decline.

On a chapter on Energy, Martyanov demonstrates how the US shale oil adventure is financially non-viable, and how a rise in oil exports was essentially due to the US “pickin up’ quotas freed chiefly as a result of Russia and Saudi Arabia’s earlier cuts within OPEC + in an attempt to balance the world’s oil market”.

In Chapter 7, Losing the Arms Race, Martyanov expands on the key theme he’s the undisputed superstar: the United States cannot win wars. Inflicting Hybrid War is another matter entirely, as in creating “a lot of misery around the world, from effectively starving people to killing them outright”.

A glaring example has been “maximum pressure” economic sanctions on Iran. But the point is these tools – which also included the assassination of Gen Soleimani – that are part of the arsenal of “spreading democracy” have nothing to do with “geoeconomics”, but have “everything to do with the raw power plays designed to achieve the main Clausewitzian object of war – ‘to compel our enemy to do our will’”. And “for America, most of the world is the enemy”.

Martyanov also feels compelled to update what he’s been excelling at for years: the fact that the arrival of hypersonic missiles “has changed warfare forever”. The Khinzal, deployed way back in 2017, has a range of 2,000 km and “is not interceptable by existing US anti-missile systems”. The 3M22 Zircon “changes the calculus of both naval and ground warfare completely”. The US lag behind Russia in air-defense systems is “massive, and both quantitative and qualitative”.

Disintegration additionally qualifies as a sharp critique of the eminently post-modernist phenomenon – starring infinite cultural fragmentation and the refusal to accept that “truth is knowable and can be agreed upon” – responsible for the current social re-engineering of the US, in tandem with an oligarchy that “realistically, is not very bright, despite being rich”.

And then there’s rampant Russophobia. Martyanov sounds the definitive red alert: “Of course, the United States is still capable of starting a war with Russia, but if it does so, this will mean only one thing – the United States will cease to exist, as will most of the human civilization. The horrific thing is that there are some people in the US for whom even this price is too small to pay.”

In the end, a cool scientific intellect cannot but rely on sound realpolitik: assuming the US avoids complete disintegration into “separatist territories”, Martyanov stresses that the only way for the American “elite” to maintain any kind of control “over generations increasingly woke or desensitized by drugs” is through tyranny. Actually techno-tyranny. And that seems to be the brave new dysfunctional paradigm further on down the road.

Pepe Escobar is an independent geopolitical analyst. He writes for RT, Sputnik and TomDispatch, and is a frequent contributor to websites and radio and TV shows ranging from the US to East Asia. He is the former roving correspondent for Asia Times Online. Born in Brazil, he’s been a foreign correspondent since 1985, and has lived in London, Paris, Milan, Los Angeles, Washington, Bangkok and Hong Kong. Even before 9/11 he specialized in covering the arc from the Middle East to Central and East Asia, with an emphasis on Big Power geopolitics and energy wars. He is the author of “Globalistan” (2007), “Red Zone Blues” (2007), “Obama does Globalistan” (2009) and “Empire of Chaos” (2014), all published by Nimble Books. His latest book is “2030”, also by Nimble Books, out in December 2015.