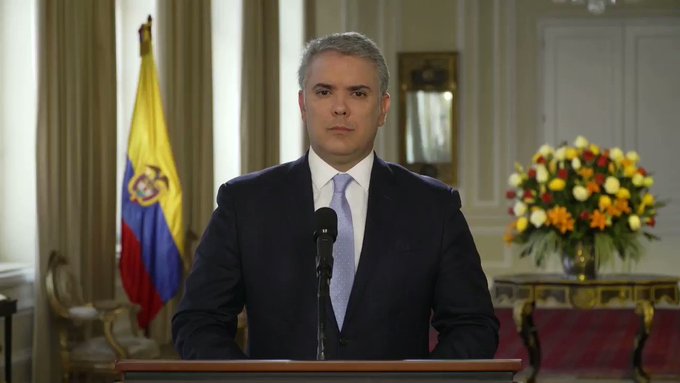 4,839 people are talking about this

Update: The Special Jurisdiction for Peace ( JEP ) reported Thursday that those members of the Revolutionary Armed Forces of Colombia-People’s Army ( FARC-EP ) who decide to take up arms will lose the benefits established by the Peace Agreement, signed in Havana 2016.

The president of the JEP, Patricia Linares indicated, at a press conference, that the news of rearmament of some ex-combatants of the FARC-EP is a serious fact for the peace process in Colombia.

Linares said that “if that FARC-EP group retakes its weapons, it loses all the benefits that were framed in the Peace Agreement .” 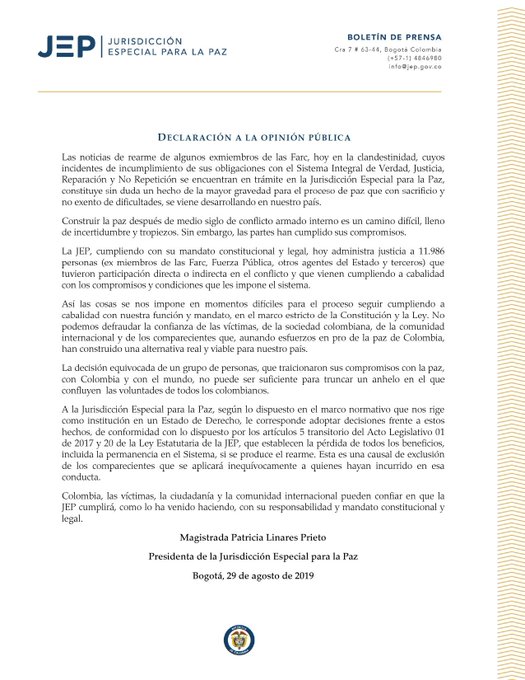 533 people are talking about this

In that sense, the official said that the Recognition Chamber and the Appeal Section of the JEP began the process to expel Iván Márquez, Jesús Santrich, El Paisa and other ex-combatants who took up weapons of the Comprehensive System of Truth, Justice, Reparation and no repetition.

“We cannot disappoint the confidence of the victims, of Colombian society, of the international community and of the participating parties who, by joining efforts for the peace of Colombia, have built a real and viable alternative for our country,” Linares said.

The Common Revolutionary Alternative Force ( FARC ) political party reiterated its commitment to peace in Colombia, following the decision by a group of leaders of the Revolutionary Armed Forces of Colombia-People’s Army ( FARC-EP ) to retake arms as a response to the lack of action on the Peace Agreements with the Colombian State.

The president of the FARC, Rodrigo Londoño, known as Timochenko, said that the great majority remain committed to the agreement ( Peace Agreement, 2016), even with all the difficulties and obstacles.

“More than 90 percent of ex-combatants remain in the peace process, ” he said during an interview in local media.

7,900 people are talking about this

Former Colombian president Juan Manuel Santos said Thursday that the State must comply with the peace agreements in force with former FARC combatants to continue stability in the nation.

“90 percent of the FARC is still in the peace process. We must continue to comply. The defectors must be repressed with all forcefulness. The battle for peace does not stop,” Santos posted on Twitter.

20.3K people are talking about this

Meanwhile, the negotiator of the Peace Accords in Colombia, Humberto de la Calle, pointed out that they reaffirm their availability to contribute to the progress of the peace process.

On Twitter, he published a statement emphasizing that “we reject and energetically condemn the announcements by Iván Márquez. We recognize that the vast majority of the FARC have complied with what was agreed and I urge to continue with the process of reinstating the partners. ”

Colombian senator Iván Cepeda also gave an opinion after knowing about the decision of a group of the FARC-EP, and indicated that this does not mean the failure of the peace process but that it is a situation that calls to persevere for the total and definitive construction of peace in the nation

For his part, former Colombian president Ernesto Samper said that “the decision of Iván Márquez and Jesús Santrich to return to the armed struggle is bad news for the peace process. Fortunately, more than 90 percent of FARC ex-combatants with their commanders have decided to keep the agreements of Havana “.

A statement from the Government of Spain condemns the return to arms of a sector of former FARC combatants.

This Thursday, through a statement, a sector of the insurgent group of the Revolutionary Armed Forces of Colombia-People’s Army (FARC-EP) invoked the universal right of peoples to rise in arms against oppression, in response to the lack in compliance with the Havana Agreement in 2016.