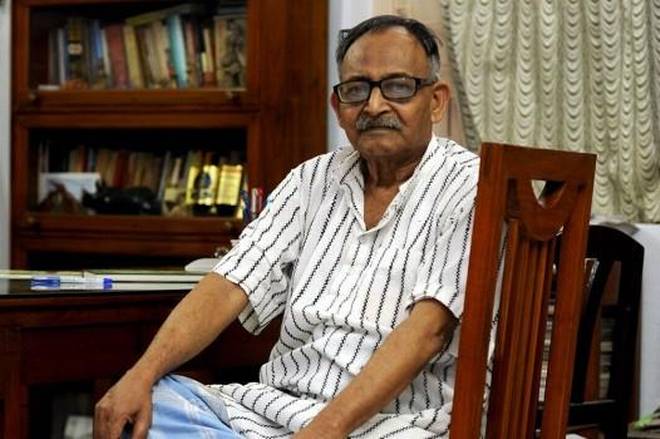 Death has finally overtaken Santosh Rana, the prominent activist-cum-intellectual and one of the foremost leaders of the historic Debra- Gopiballabhpur peasant struggles that attracted attention throughout West Bengal in 1969-70.

He died on 29th of June after a prolonged fight with throat cancer at a private hospital of South Kolkata.

Hailing from a poor peasant family of West Medinipur, he managed to perform creditably at the then intermediate science examination of the University of Calcutta from Jhargram Raj College and then got admitted into the Presidency College, which had then an extraordinary galaxy of brilliant students and teachers. The reader may find a glimpse of it in his autobiography Rajnitir Ek Jiban (A Life of Politics) published by Ananda Publishers, Kolkata. The book, it may be noted, was written when he was already a patient of cancer. It also describes what he had to undergo during his student life.

After his graduation, he received his M. Tech degree from the University of Calcutta and stood first, by virtue of which he was awarded a lucrative fellowship.

But he had already acquired a close familiarity with the nature of feudal exploitation in the countryside and felt the need to struggle against it. That was a period of strong political turbulence and a leftist surge. As a young man with a strong sensitive mind, Santosh Rana became attracted to it, and after the Naxalbari uprising, supported it. He then decided to give up his lucrative fellowship and organize the peasantry of his area.

Quite a few student and youth activists, led by Ashim Chatterjee, also went to the area. In late 1967, he, then serving as a school teacher, was arrested under the Preventive Detention Act, and released in early 1969. Then he restarted his work in the countryside along with his fellow activists. The result of their work was the Gopiballabhpur uprising. After about one year of initial progress, the movement received a setback, mainly due to the left adventurist practices that gripped the CPI (M-L). In his autobiography and some of his articles, he has analyzed the reasons for the setback.

Finally, Santosh Rana was arrested from a Kolkata shelter in 1972. He spent five years in jail.

In 1977, when his organization decided to participate in the assembly polls, he was elected to the assembly. During the process of reorganization and reunification of the Naxalite movement, he became an important leader of it.

What is important about his personality is that he, despite many trials and tribulations, never surrendered to frustration and went on adding to his knowledge about society and politics by study and practice.

He was a prolific writer, and since the later eighties of the last century, wrote many articles on various issues dealing with the question of identities and the relation of identity struggle with class struggle as well as the problems of building socialism and communism. A number of his articles were compiled in two volumes named ‘Samaj, Shreni O Rajniti’ (Society, Class and Politics) and Bampantha O Ganatantra (Leftism and Democracy). If one goes through these two collections, one will have a glimpse of the range of his knowledge and ideas.

One point should be noted in this connection, Rana’s deep thoughts about the problems of socialism led him to believe that there could be no flourishing of socialist practice and of dictatorship of the proletariat without the broadest possible democracy. He, along with his close colleague Vaskar Nandy, wrote much on the subject.

Even when he was struggling with cancer, his pen did not stop functioning, and he wrote many articles for Frontier, Deshkal Bhabna, Sramajibi Bhasa, etc. Some of his articles were translated from Bengali into English, and published in Frontier. He also co-authored, with Kumar Rana, a factually rich book on dalits and adivasis in West Bengal. This small book is a veritable treasure house of information on the depressed identities of West Bengal. He was a prolific translator also and translated a number of books into Bengali. Two of these books are William Hinton’s The Great Reversal and Samir Amin’s The Future of Maoism.

Santosh Rana had many detractors also, and often many kinds of lampoons were directed against him on many occasions. It should be noted that many of those who tried to denigrate him never had the courage to get involved in struggles that Rana did; they never thought of sacrificing their worldly interests for the cause they pretended to uphold. These self-styled ‘radical’ intellectuals only learnt some phrases like ‘revolution’ and ‘armed struggle’ and hence their radicalism became symbolic of the motto ‘opportunism for myself and Marxism for others.’ Santosh Rana, however, did not pay such criticism any heed because he was well aware of the nature of hollowness of those critics and their criticism. Rana’s demise marks the end of a long journey, a journey of unflinching commitment to the people.