The lie that the government and culture of Ukraine are filled with dangerous “Nazis” has become a central theme of Kremlin propaganda about the war. 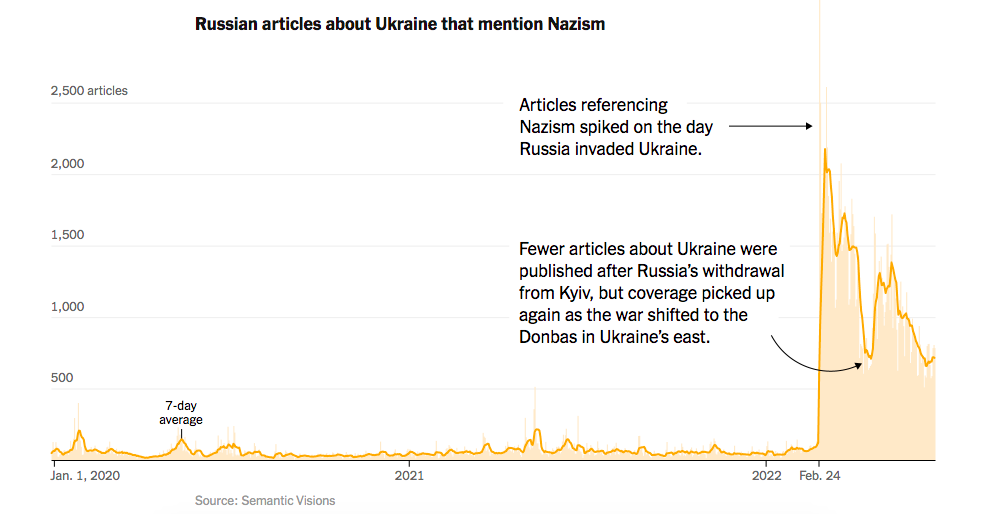 The New York Times (7/2/22) attributed a spike in mentions of Nazism at the start of Putin’s invasion of Ukraine to Putin describing Ukraine as “full of Nazis,” but did not discuss Western media comparing Putin to Hitler.

To say Ukraine is “filled” with Nazis is an obvious exaggeration, although even a relatively small number of Nazis has wielded disproportionate influence in the Ukrainian government (Kyiv Post, 3/26/19; Euronews, 8/4/21). Nevertheless, FAIR (3/7/14, 1/15/22, 1/28/22, 2/23/22) has covered the Western media’s denial of the far-right’s role in the Ukrainian 2014 coup, as well as their complicity in amplifying Ukrainian neo-Nazi publicity stunts during the war.

END_OF_DOCUMENT_TOKEN_TO_BE_REPLACED

Westerners would be a lot less cavalier about demanding a foreign population keep fighting until total victory if they truly understood the horrors of war. Unfortunately, there’s a propaganda machine of unprecedented sophistication that has spent generations preventing them from obtaining that very understanding.

While everyone’s focused on the latest mass shooting in the US, The Washington Post published what may be the first major acknowledgment from the mainstream western media that Ukraine’s war against Russia has not been nearly the cakewalk they’ve been leading the public to believe.

In a new article titled “Ukrainian volunteer fighters in the east feel abandoned,” WaPo reports that contrary to the triumphant narratives the western world is being spoon-fed, many troops in eastern Ukraine have been surviving on one potato per day and deserting their posts because they feel their leaders have turned their backs on them and they’re being sent to certain death.

“Stuck in their trenches, the Ukrainian volunteers lived off a potato per day as Russian forces pounded them with artillery and Grad rockets on a key eastern front line. Outnumbered, untrained and clutching only light weapons, the men prayed for the barrage to end,” The Washington Post reports, citing multiple named sources.

END_OF_DOCUMENT_TOKEN_TO_BE_REPLACED

British politician and broadcaster George Galloway has made headlines in the UK with his threat to press legal action against Twitter for designating his account “Russia state-affiliated media”, a label which will now show up under his name every time he posts anything on the platform.

“Dear @TwitterSupport I am not ‘Russian State Affiliated media’,” reads a viral tweet by Galloway. “I work for NO Russian media. I have 400,000 followers. I’m the leader of a British political party and spent nearly 30 years in the British parliament. If you do not remove this designation I will take legal action.”

Galloway argues that while his broadcasts have previously been aired by Russian state media outlets RT and Sputnik, because those outlets have been shut down in the UK by Ofcom and by European Union sanctions he can no longer be platformed by them even if he wants to. If you accept this argument, then it looks like Twitter is essentially using the “state-affiliated media” designation as a marker of who Galloway is as a person, rather than as a marker of what he actually does.

END_OF_DOCUMENT_TOKEN_TO_BE_REPLACED

A lot less, particularly when they’re victims of the US

As US news media covered the first shocking weeks of the Russian invasion of Ukraine, some media observers—like FAIR founder Jeff Cohen (Common Dreams, 2/28/22)—have noted their impressions of how coverage differed from wars past, particularly in terms of a new focus on the impact on civilians.

To quantify and deepen these observations, FAIR studied the first week of coverage of the Ukraine war (2/24–3/2/22) on ABC World News Tonight, CBS Evening News and NBC Nightly News. We used the Nexis news database to count both sources (whose voices get to be heard?) and segments (what angles are covered?) about Ukraine during the study period. Comparing this coverage to that of other conflicts reveals both a familiar reliance on US officials to frame events, as well as a newfound ability to cover the impact on civilians—when those civilians are white and under attack by an official US enemy, rather than by the US itself.

One of the most striking things about early coverage has been the sheer number of Ukrainian sources. FAIR always challenges news media to seek out the perspective of those most impacted by events, and US outlets are doing so to a much greater extent in this war than in any war in recent history. Of 234 total sources—230 of whom had identifiable nationalities—119 were Ukrainian (including five living in the United States.)

END_OF_DOCUMENT_TOKEN_TO_BE_REPLACED

Two weeks have passed since the start of the war in Ukraine. Peoples Dispatch has written extensively about the role of NATO, and the United States more centrally, in setting the stage for the current war in Ukraine. But despite the centrality of NATO in creating this conflict, the people of NATO countries have been bombarded with news media that places the sole blame on Russia.

The results of this constant propaganda on the people of NATO countries are apparent. In Canada, a Russian community center, with no ties to the Russian government, was vandalized with the colors of the Ukrainian flag. In Wales, the Cardiff Philharmonic banned Tchaikovsky from future performances. And in the United States, a country with an ugly history of war-related hysteria and racism, anti-Russian Sentiment has grown to Cold War levels.

END_OF_DOCUMENT_TOKEN_TO_BE_REPLACED

Emmanuel Macron said in a speech Wednesday it’s a lie that Russia is fighting Nazis in Ukraine. But in 2014, the BBC, the NYT, the Daily Telegraph and CNN — not just CN — reported on the Nazi threat.

Exclusive: Throughout the Ukraine crisis, the U.S. State Department and mainstream media have downplayed the role of neo-Nazis in the U.S.-backed Kiev regime, an inconvenient truth that is surfacing again as right-wing storm troopers fly neo-Nazi banners as they attack in the east, Robert Parry reports.

The New York Times reported almost in passing on Sunday (Aug. 10) that the Ukrainian government’s offensive against ethnic Russian rebels in the east has unleashed far-right paramilitary militias that have even raised a neo-Nazi banner over the conquered town of Marinka, just west of the rebel stronghold of Donetsk.

That might seem like a big story a U.S.-backed military operation, which has inflicted thousands of mostly civilian casualties, is being spearheaded by neo-Nazis. But the consistent pattern of the mainstream U.S. news media has been since the start of the Ukraine crisis to white-out the role of Ukraine’s brown-shirts.

END_OF_DOCUMENT_TOKEN_TO_BE_REPLACED

KIEV, UKRAINE — We are living in dangerous times. All around the world, intense military actions are taking place. Last week alone, Russia launched a huge military invasion of Ukraine; Saudi Arabia carried out dozens of strikes on Yemen; Israel launched a wave of deadly missile attacks against Syria; and the United States restarted its bombing campaign in Somalia.

These four deadly incidents happened concurrently. Yet judging by media coverage, it is highly unlikely that many will even be aware of the final three. A MintPress News study of five leading Western media outlets found that overwhelming attention was paid to Russia’s invasion of Ukraine, while the others were barely mentioned, if at all.

END_OF_DOCUMENT_TOKEN_TO_BE_REPLACED 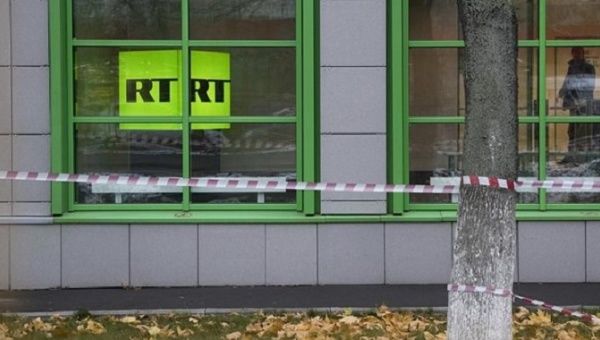 The president of Prensa Latina agency Luis Enrique Gonzalez condemned recent actions taken by the European Community and digital platforms against outlets Russia Today (RT) and Sputnik. According to the statement, the boycott of RT and Sputnik violates the individual rights of the professionals who work in these media.