Kate Clark is the former Moscow correspondent for Britain’s Morning Star newspaper. She was stationed there from 1985-90, during the Soviet Union’s final years. As part of her work, she spent time in Crimea, whose people voted in 2014 to return to Russian administration rather than Ukrainian. With the hype around a possible Russian “invasion” of Ukraine, many commentators are now reviving stories of Russia’s “annexation” of Crimea as an example of the supposed fate that awaits Ukraine. In the following article, Clark looks at the history of Crimea and subverts the mainstream media’s tales of a Russian takeover of the region. It includes excerpts from a forthcoming book on her years in Moscow.

In June 1985, as the Morning Star’s Moscow correspondent, I had the chance to visit the Crimean peninsula, for centuries a holiday and recuperation favorite for Russian leaders and famous writers like Mikhail Lermontov, Anton Chekhov (whose famous short story The Lady with the Little Dog was set in Yalta), Leo Tolstoy (whose family lived for nearly a year in an old mansion in Gaspra), Fyodor Dostoyevsky, and many other prominent Russians of pre-revolutionary times.

END_OF_DOCUMENT_TOKEN_TO_BE_REPLACED

An informal chat with Caleb Maupin as your guide to the multitude of news, lies, distortions, rumors, idiocies, hypocrisies, and ideologies that shape our world.

END_OF_DOCUMENT_TOKEN_TO_BE_REPLACED

In this titanic struggle, the power of the working class, the Soviet power, demonstrated its superiority at all levels. END_OF_DOCUMENT_TOKEN_TO_BE_REPLACED

How could the Great Patriotic War in which the Soviet people (including many members of my own family) lost at least 25 million lives, have anything in common with the latest outbreak of the novel coronavirus?

You think this is an absolutely insane question?

However, before you dismiss it, think twice. There are similarities how they are being portrayed. There is a dangerous, even deadly, pattern.

The storylines of both monumental events have been shamelessly kidnapped and perverted by Western propaganda! END_OF_DOCUMENT_TOKEN_TO_BE_REPLACED

A Journal of People series

June 6 marks the 75th anniversary of D-Day – propagated by the mainstream media (MSM) as the “turning point” of World War II. But in terms of casualties inflicted on Nazi Germany, the allied invasion of Normandy is easily overshadowed by Stalingrad.

The D-Day landings in Normandy, France, are loudly propagated by the MSM as an unprecedented military victory and operation that broke the back of Nazi Germany.

Hollywood films and many media reports and books try to make the D-Day as the only immemorial achievement in the WWII.

But an examination of the facts gives a different picture:

An estimated 110,000 Nazi soldiers were killed, captured, or went missing during the battle for Normandy while Nazi losses in Stalingrad totaled 1.5 million.

But the MSM tries to wipe out the sacrifices, heroisms and achievements in Stalingrad from the memory of its readers and viewers. Today’s imperialist leaders feel shy to mention the name Stalingrad – its people, its fighters, women and men, soldiers and civilians turned soldiers. The facts tell reason behind capitalists’ hatred to Stalin.

Following is a series of reports/articles (part/full), gathered from the MSM, that tell a part of the story. One story in the series shows a few imperialist masters’ dirty design: Destroy the Soviet Union, the working people’s state.

The reports/articles posted here are FOR NON-PROFIT, NON-COMMERCIAL, EDUCATIONAL PURPOSE.

‘It was the Western Allies’ extreme good fortune that the Russians, and not themselves, paid almost the entire ‘butcher’s bill’ for defeating Nazi Germany’

In the Western popular imagination – particularly the American one – World War II is a conflict we won. It was fought on the beaches of Normandy and Iwo Jima, through the rubble of recaptured French towns and capped by sepia-toned scenes of joy and young love in New York. It was a victory shaped by the steeliness of Gen. Dwight D. Eisenhower, the moral fiber of British Prime Minister Winston Churchill, and the awesome power of an atomic bomb.

But that narrative shifts dramatically when you go to Russia, where World War II is called the Great Patriotic War and is remembered in a vastly different light.

This month, three quarters of a century ago, the most famous battle of the Second World War began. More than four million combatants fought in the gargantuan struggle at Stalingrad between the Nazi and Soviet armies. Over 1.8 million became casualties. More Soviet soldiers died in the five-month battle than Americans in the entire war. But by February 2, 1943, when the Germans trapped in the city surrendered, it was clear that the momentum on the Eastern Front had shifted. The Germans would never fully recover. END_OF_DOCUMENT_TOKEN_TO_BE_REPLACED

END_OF_DOCUMENT_TOKEN_TO_BE_REPLACED

by Max Hastings for the Daily Mail

Ahead of the game: Winston Churchill began making plans to go to war with Russia

When Winston Churchill learned in the spring of 1945 that the Americans were going to halt their advance on Berlin from the west and leave Hitler’s capital to the mercies of the Red Army of the Soviet Union, he was furious. 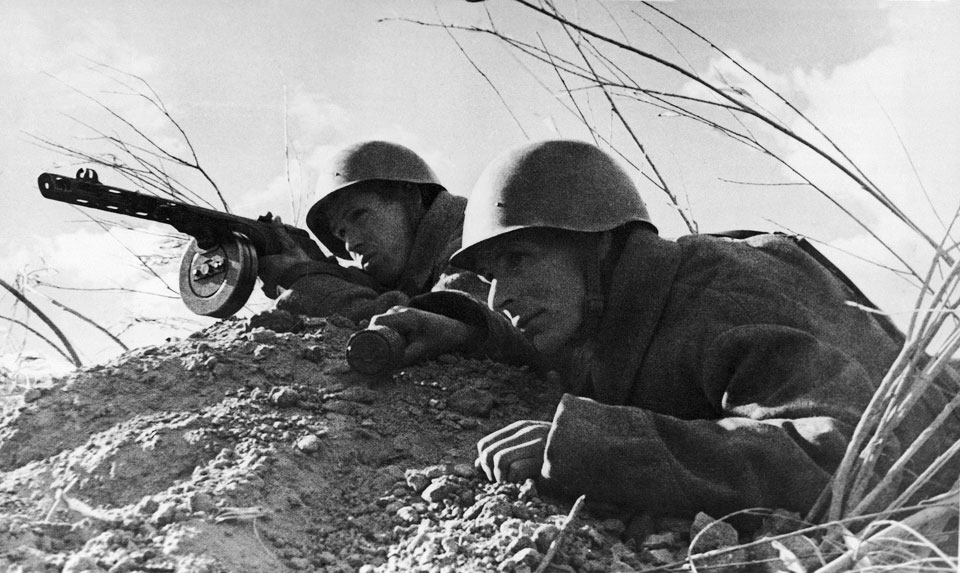 On the 75th Anniversary of D-Day today, there are ceremonies honoring the American heroes who landed on the beaches of Normandy and defeated the Nazis. This is as it should be. What is not right, however, is that rarely are we honoring in our ceremonies the Soviet heroes who bore the brunt of the battles to defeat fascism in World War II.

Americans are not surprised when they hear that historians distort the truth, but most of us believe it is foreign historians, not ours, who are in the business of distortion.