We trekked through the Bolivian Amazon, drenched in sweat. Draped head to toe in bug repellent gear, we stayed just ahead of the clouds of mosquitoes as we sidestepped roots, vines and giant ants. My local research assistant Dino Nate, my partner Kelly Rosinger and I were following Julio, one of my Tsimane’ friends and our guide on this day. Tsimane’ are a group of forager-horticulturalists who live in this hot, humid region. Just behind us, Julio’s three-year-old son floated happily through the jungle, unfazed by the heat and insects despite his lack of protective clothing, putting my perspiration-soaked efforts to shame.

END_OF_DOCUMENT_TOKEN_TO_BE_REPLACED

The pueblos of Jemez and Laguna are the latest to raise concerns over inadequate protections for local water sources in the desert Southwest. The challenge filed last week in federal court follows a similar case brought in 2020 by the Navajo Nation, the nation’s largest Native American tribe, and several environmental groups. END_OF_DOCUMENT_TOKEN_TO_BE_REPLACED

Safe Drinking Water in America: Not Everyone Has It

Although Americans are fortunate to consume some of the safest and most reliable water on Earth, it does not mean all is hunky-dory

When the novel coronavirus disease (COVID-19) outbreak swept across the United States, toilet paper, hand sanitiser and Clorox wipes flew off store shelves. But shopping carts have also been full of something that most Americans get supplied straight to their home: Water.

The novel coronavirus is not a waterborne pathogen. The World Health Organization says the virus’s “risk to water supplies is low.” The Centers for Disease Control and Prevention (CDC) affirmed that “the virus that causes COVID-19 has not been detected in treated drinking water.” END_OF_DOCUMENT_TOKEN_TO_BE_REPLACED

Towards Safe Drinking Water and Clean Cooking For All

The public health community has tried for decades to show, through evidence-based research, that safe water, sanitation, and hygiene (WASH) and clean cooking fuels that reduce household air pollution are essential to safeguard health and save lives in low-income and middle-income countries. In the past 40 decades, there have been many innovations in the development of low-cost and efficacious technologies for WASH and household air pollution, but many of these technologies have been associated with disappointing health outcomes, often because low-income households have either not adopted, or inconsistently adopted, these technologies. In this Viewpoint, we argue that public health researchers (ourselves included) have had an oversimplified understanding of poverty; our work has not focused on insights into the lived experience of poverty, with its uncertainties, stresses from constant scarcity, and attendant fears. Such insights are central to understanding why technologies for safe water or clean cooking are unused by so many households that could benefit from them. We argue that, rather than improved versions of household-scale delivery models, transformative investments in safe water and clean cooking for all require utility-scale service models. Until then, research should focus on interim safe water and clean cooking options that are directed towards the utility-scale service model.

END_OF_DOCUMENT_TOKEN_TO_BE_REPLACED Veolia, one of the world’s largest private water corporations, has just announced the acquisition of 29.9 percent of Suez Water, another of the planet’s largest multinationals, with a plan to gain full control at a later date.

Based in France, Veolia already employs nearly 100,000 people worldwide, and this deal is set to greatly expand that. In order to get around French anti-monopoly laws, Suez will continue to operate in France, but Veolia will take over its operations around the world, including in the United States.

The company’s CEO, Antoine Frérot, has presented the move as a triumph for the environment. “I am very happy to lay the foundation stone in France today for a world super champion of the ecological transformation,” he said, adding that this was a “wonderful opportunity” for both investors and the planet. END_OF_DOCUMENT_TOKEN_TO_BE_REPLACED

Global water and food shortages to cause new migrant crisis in Europe as more than 1.2 billion people will be displaced

A significant number of climate refugees will seek asylum in Europe, as more than 1.2 billion people will be displaced by climate crisis over the next three decades, warns a report.

According to the new analysis of global ecological threats, rapid population growth, lack of access to food and water and increased exposure to natural disasters mean displacement of 1.2 billion people by 2050.

Water and food shortages are set to cause mass migration from 31 countries, which are unable to cope with looming environmental crises, warned the Institute of Economics and Peace (IEP). END_OF_DOCUMENT_TOKEN_TO_BE_REPLACED 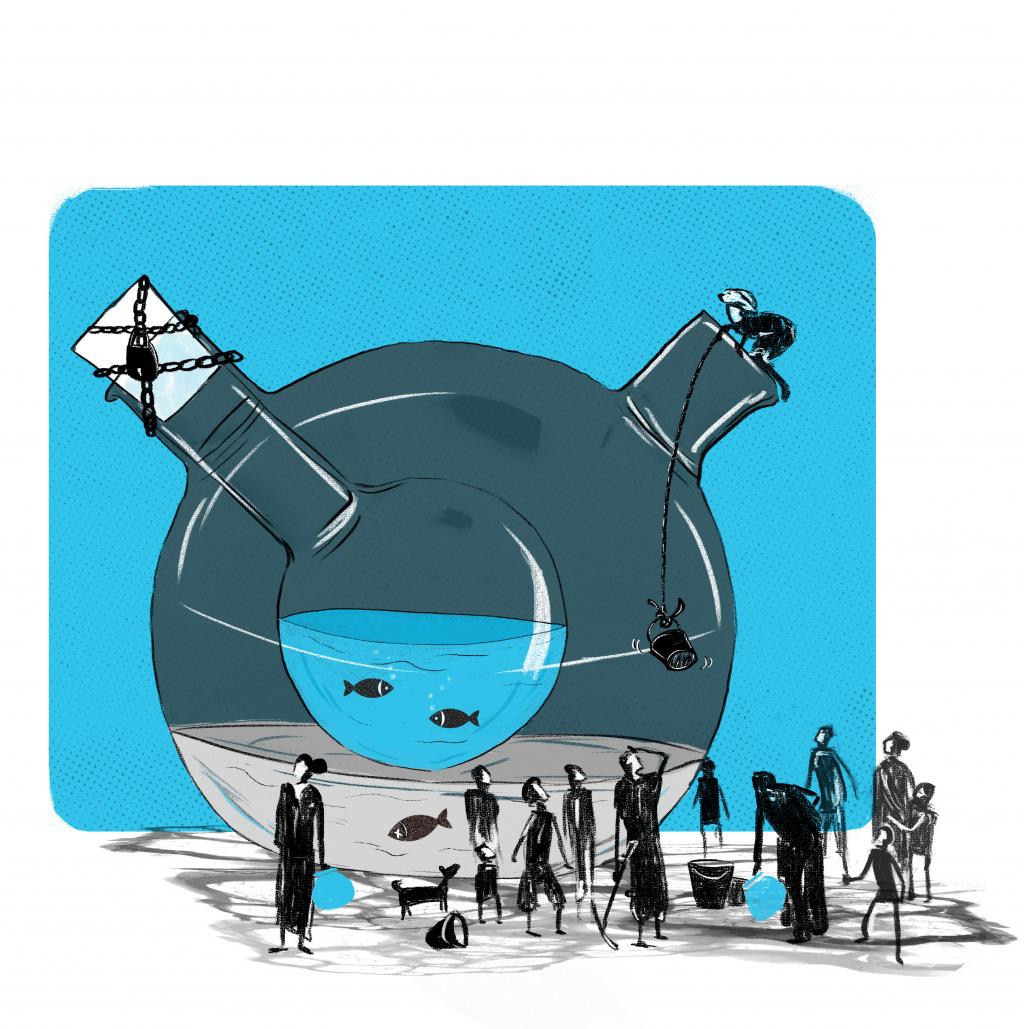 Water resources are fast depleting and deteriorating. Fall in surface water availability due to changing rainfall pattern increases dependency on groundwater. Groundwater level has been receding at an alarming rate in many parts of India, as a result of over-extraction and changing seasonality and intensity of rainfall.

In the coastal zones, this is leading to salinity intrusion in aquifers. Water scarcity causes conflicts over allocation and clash between people. Climate change impacts will have direct consequences for water security with its reflection on food security. A recent study by the International Food Policy Research Institute found that more than half the world’s population and approximately half of global grain production will be at risk due to water stress by 2050. END_OF_DOCUMENT_TOKEN_TO_BE_REPLACED

Global food production patterns would be fundamentally altered by climate change, causing food insecurity because of small shifts in seasonality and water availability, according to the World Water Development Report released by the United Nations on March 22, 2020.

An increase in food prices would increase rural poverty, the report said.

The impact of regional precipitation patterns on four major crops – wheat, soybean, rice and maize – was already projected to emerge by 2040, according to an article published by journal Proceedings of the National Academy of Sciences of the United States of America in May, 2019. END_OF_DOCUMENT_TOKEN_TO_BE_REPLACED

On September 26, thousands of workers and citizens took to the streets in the Peruvian capital Lima to protest against the privatization of water and sanitation services in the city. The protesters peacefully marched through various main avenues of the city to the Ministry of Housing, Construction and Sanitation, demanding the abolition of Supreme Decree no. 214-2019-EF.

Said decree seeks to privatize the state-owned water and sanitation company, Potable Water and Sanitation Service of Lima (SEDAPAL), which provides services to the cities of Lima and Callao. It was passed by the right-wing government of President Martín Vizcarra in July of this year.

END_OF_DOCUMENT_TOKEN_TO_BE_REPLACED

The rate of global warming could increase in the future while over-tapped waterways could leave developing parts of Asia without enough water to cool power plants in the near future, warns new studies. Another study finds direct link between surface melting and short bursts of glacier acceleration in Antarctica.

The rate at which the planet warms in response to the ongoing buildup of heat-trapping carbon dioxide gas could increase in the future, according to new simulations of a comparable warm period more than 50 million years ago, said Jiang Zhu, Christopher J. Poulsen and Jessica E. Tierney in their report — “Simulation of Eocene extreme warmth and high climate sensitivity through cloud feedbacks” — published in on September 18 in the journal Science Advances (2019, 5:9) END_OF_DOCUMENT_TOKEN_TO_BE_REPLACED