A Journal of Peoples Report

August 10, 1961. The U.S. began chemical warfare in Vietnam.
The imperialism began war in Vietnam much ago. As part of that war, imperialism began chemical warfare on this day.
Between 1963 And 1966 over 6 Million liters of chemicals were dumped over Vietnam in its attempt to defeat the Vietnamese people.
By 1971, imperialism sprayed 77 million liters of defoliants over South Vietnam, a part of today’s Vietnam. Of this amount of chemical, 44 million liters contained dioxin, which caused diseases and genetic mutations among the Vietnamese people, and in other living beings, which came to interaction with the chemicals.
Some three million Vietnamese were affected by direct contact with dioxin in that decade.

END_OF_DOCUMENT_TOKEN_TO_BE_REPLACED 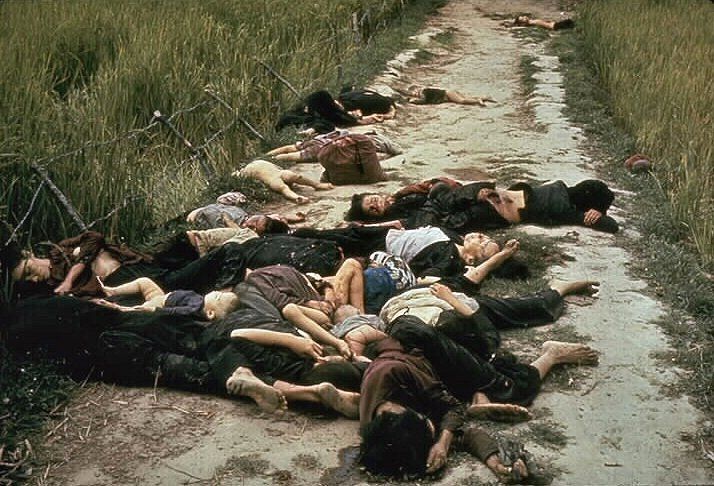 50 years ago today, on March 16,1968, a company of green, battle-untested US Army combat soldiers from the Americal Division, swept into the un-defended Vietnamese hamlet of My Lai, rounded up the 500+ unarmed women, children, babies and old men, and efficiently executed almost all of them in cold blood, Nazi-style. No weapons or Viet Cong soldiers were found in the village. The entire killing operation took only 4 hours. END_OF_DOCUMENT_TOKEN_TO_BE_REPLACED

FOR the past few decades, an unholy alliance of politicians, generals, journalists and academics have spent unlimited time and resources trying to convince the world that the US invasion of Vietnam was done with the best of intentions, the general narrative being that it was an idealistic crusade centred on the defence of democracy.

If crimes did occur, these were very much exceptional mistakes and, if they weren’t, actions do have to be contextualised. After all, wasn’t the communist enemy 10 times worse?

It’s an unremitting campaign and one which has returned with a vengeance as the empire continues to justify ongoing warfare against all those not willing to play ball. END_OF_DOCUMENT_TOKEN_TO_BE_REPLACED

Boxing great Muhammad Ali, known around the world as a humanitarian who spoke out forcefully against racial inequality, social injustice, and the Vietnam War during the 1960’s, has died at the age of 74.

The news of the athlete’s passing was confirmed by several news outlets late Friday night as well as a brief statement released on behalf of the family.

“After a 32-year battle with Parkinson’s disease, Muhammad Ali has passed away at the age of 74. The three-time World Heavyweight Champion boxer died this evening,” said family spokesperson Bob Gunnell in the statement. END_OF_DOCUMENT_TOKEN_TO_BE_REPLACED

The people of Vietnam waged a people’s war to defeat imperialists’ war in Vietnam (1954-1975). The Vietnam people’s principled stand, courage, sacrifice and suffering, tenacity and creativity, and organization, leadership, planning and far-sightedness stand as an example in the world anti-imperialist struggle.

Still the people of Vietnam have suffered the pain of that war. It is unimaginable pain. The people in the U.S. also had to suffer as cannon fodder to the imperialist war. They are still suffering also.

The people of Vietnam showed their courage, willingness and capacity to stand against imperialism, to defend their country and their way of life. They stood for national liberation, reunification of their country, non-interference in their society, and peace.

On April 30, 1975, imperialism had to accept a humiliating defeat, and had to run away from Vietnam. The way it ran away was like a joker. The following reports, in part 2, tell only a fragment of Vietnam’s struggle and suffering: END_OF_DOCUMENT_TOKEN_TO_BE_REPLACED

Vietnam showed principled stand and courage.  Sacrifice and suffering, tenacity and creativity, and organization, leadership, planning and far-sightedness of the people of Vietnam stand as an example in the world anti-imperialist struggle. The Vietnam War (1954-1975) was people’s war.

On April 30, 1975, imperialism had to accept a humiliating defeat, and had to run away from Vietnam. The way it ran away was like a joker. The following reports tell only a fragment of Vietnam’s struggle:

Sinking of US aircraft carrier

“Seventy-nine-year-old former Vietnamese commando Lam Son Nao still feels uncomfortable whenever he thinks about the moment he tried to recover 84 kilos of explosives that had been left near the USNS Core aircraft carrier. END_OF_DOCUMENT_TOKEN_TO_BE_REPLACED