Amazon workers at the Staten Island, New York Fulfillment Center are preparing to file for a union election with the National Labor Relations Board. As previously reported, workers at this location have already brought a lawsuit against Amazon with respect to working conditions and hazards, which was subsequently dismissed. Now, workers are preparing to unionize at this location.

Amazon has taken actions to dissuade unionization by reportedly confiscating pro-union literature and distributing anti-union flyers. The company has also slandered an organizer who was fired from the location due to his unionization effort. A leaked memo described organizer and former warehouse employee Christian Smalls as “not smart or articulate”.

END_OF_DOCUMENT_TOKEN_TO_BE_REPLACED

The tally was 71 percent no to 29 percent yes—though it’s possible the actual split was closer to 60-40, if you consider the large number of ballots that were cast but never counted because they were challenged by the company. END_OF_DOCUMENT_TOKEN_TO_BE_REPLACED

Locals and residents of Bessemer came out in support of the unionization drive by Amazon workers on March 20. Photo: Liberation

After more than seven weeks of ballot submissions, the workers at Amazon’s Bessemer warehouse in Alabama submitted their final votes on Monday, March 29, to decide whether or not they want a union. On Tuesday, March 30, the National Labor Relations Board (NLRB) began the count of over 5,800 ballots, the results of which could take the next couple of days to be released.

The unionization drive has grabbed national limelight over the past two months, not only because of the historical nature of the vote and the impact it could have on union organizing across the country, but also because it revealed the abysmal work culture at one of the United States’ largest employers. At the same time, the campaign unlike previous campaigns for unionizing Amazon workers managed to attract nationwide solidarity and support. END_OF_DOCUMENT_TOKEN_TO_BE_REPLACED

Bernie asks Jeff Bezos: You are worth $182 billion … why are you doing everything in your power to stop your workers from unionizing?

“Bezos and Musk now own more wealth than the bottom 40%. Meanwhile, we’re looking at more hunger in America than at any time in decades,” Sanders said in his opening remarks at the Senate Budget Committee hearing, which was titled The Income and Wealth Inequality Crisis in America.

“If he was with us this morning, I would ask him the following question … Mr. Bezos, you are worth $182 billion – that’s a B,” Sanders said. “One hundred eighty-two billion dollars, you’re the wealthiest person in the world. Why are you doing everything in your power to stop your workers in Bessemer, Alabama, from joining a union?” END_OF_DOCUMENT_TOKEN_TO_BE_REPLACED

WORKERS OF TECH GIANTS ARE FIGHTING BACK

Google Employees and Other Alphabet Units Form a Union

The new labor group focuses not only on wages and benefits like most unions, but also aims to play a role in the tech giant’s ethical decisions and protection against arbitrary firings for activism.

Employees of U.S. tech company Google and other units of its parent company Alphabet announced Monday the creation of a union, intensifying a period of activism targeting the Silicon Valley giants.

According to a statement, the Alphabet Workers Union, affiliated with the Communications Workers of America, aims to represent well-paid workers in the tech sector and temporary employees and contractors.

END_OF_DOCUMENT_TOKEN_TO_BE_REPLACED

Pittsburgh – Educators at Environmental Charter School have voted for union representation in an official ballot conducted by the National Labor Relations Board this evening.

A clear majority of ECS teachers and other professionals elected to unionize after signing a petition last month stating their desire to join the American Federation of Teachers. Voter turnout was 100 percent. END_OF_DOCUMENT_TOKEN_TO_BE_REPLACED 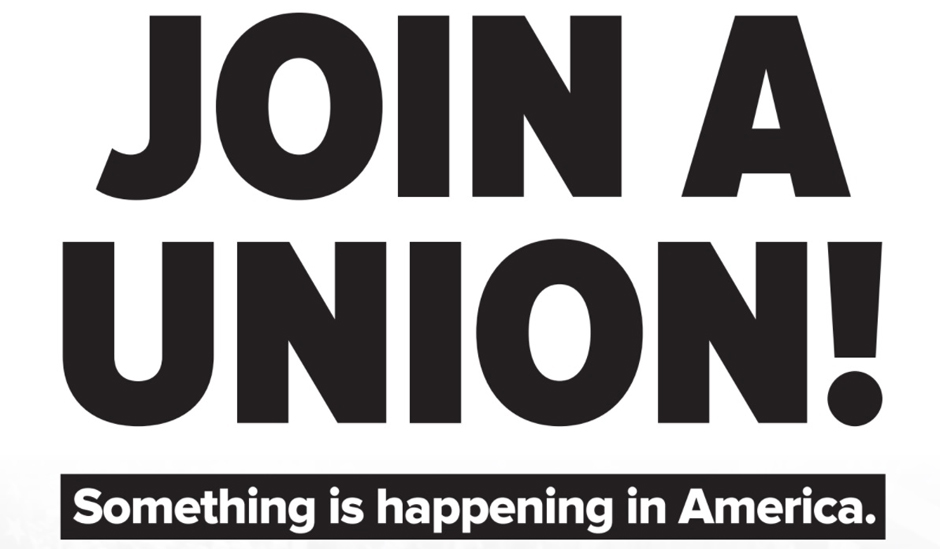 The point, federation President Richard Trumka says in an open letter to all workers – the centerpiece of the drive – is to tell workers if they want decent raises, better benefits, and a voice on the job, unionizing is the way to go. END_OF_DOCUMENT_TOKEN_TO_BE_REPLACED

ST. LOUIS—Constant attacks on the rights of working people by the current administration occupying the White House have put the labor movement on the defensive across the country. The tough fight to spread the narrative about union power, push back the threat of anti-labor policies, and protect shrinking unions can make the outlook for the labor movement seem bleak. END_OF_DOCUMENT_TOKEN_TO_BE_REPLACED

Conductors on Southern Rail, which serves south London and south-east England, will down tools for 48 hours today in their latest protest against the deskilling of their jobs.

The RMT walkout follows a drivers’ strike last week over the same issue of driver-only train operation, which unions fear will lead to the second member of on-board staff being stripped out altogether. END_OF_DOCUMENT_TOKEN_TO_BE_REPLACED