While Western media covers up their credibility issues, these pseudo-experts and spooks have helped drive the dirty war on Syria.

Atight-knit cast of characters has sought to destabilize the Syrian government by convincing Syrians, Western citizens, foreign states, and international bodies that the CIA-backed Free Syrian Army is a legitimate, “moderate” alternative, while flooding news across the globe with opposition propaganda.

Its key actors have also played a central part in high-profile chemical weapon deceptions, participating in the attacks’ staging, generating media coverage, orchestrating official investigations and even legal actions, all with the clear goal of cultivating Western support for regime change.

Despite facing official investigation into corrupt practices and being exposed for serious credibility issues, these figures have been treated with adulation by a Western mainstream media that appears just as committed to destabilizing Syria as they have been.

END_OF_DOCUMENT_TOKEN_TO_BE_REPLACED

For the second time in the five months since he was inaugurated, President Joe Biden on Sunday ordered a U.S. bombing raid on Syria, and for the first time, he also bombed Iraq. The rationale offered was the same as Biden’s first air attack in February: the U.S., in the words of Pentagon spokesman John Kirby, “conducted defensive precision airstrikes against facilities used by Iran-backed militia groups in the Iraq-Syria border region.” He added that “the United States acted pursuant to its right of self-defense.”

Embedded in this formulaic Pentagon statement is so much propaganda and so many euphemisms that, by itself, it reveals the fraudulent nature of what was done. To begin with, how can U.S. airstrikes carried out in Iraq and Syria be “defensive” in nature? How can they be an act of “self-defense”? Nobody suggests that the targets of the bombing campaign have the intent or the capability to strike the U.S. “homeland” itself. Neither Syria nor Iraq is a U.S. colony or American property, nor does the U.S. have any legal right to be fighting wars in either country, rendering the claim that its airstrikes were “defensive” and an “act of self-defense” to be inherently deceitful.

END_OF_DOCUMENT_TOKEN_TO_BE_REPLACED

Syrian air defenses have shot down most of the missiles targeting the area outside Damascus, the Syrian capital, from the territory of the occupied Golan Heights, reported SANA, Syria’s state media.

Syria blamed Israel for the attack.

Citing a military source SANA said: The missiles were launched towards the Syrian capital at around 10.16 pm local time. Few of the projectiles are believed to have reached the ground.

The source said Syria’s missile defenses took down “most of the enemy missiles.” END_OF_DOCUMENT_TOKEN_TO_BE_REPLACED 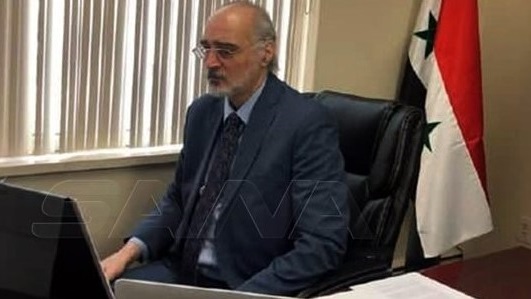 Syria’s ambassador to the United Nations and its deputy foreign minister, Bashar al-Jaafari, demanded the immediate withdrawal of all US troops from the country that are illegally occupying parts of Syrian territory and plundering the country’s oil and gas resources. He was speaking at a virtual conference of the UN Security Council on Wednesday, January 20.

Al-Jaafari also accused the US of aiding and supporting terrorist organizations such as ISIS and Jabhat al-Nusra who still control parts of Syria’s Idlib province, in their attacks on the Syrian people. He alleged that occupation forces and terrorist groups act together to loot Syria’s economic resources or burn and plunder items when confronted, Syrian Arab News Agency (SANA) reported. END_OF_DOCUMENT_TOKEN_TO_BE_REPLACED

For the third year in a row, Yemen has topped the IRC list, the report estimating that 80% of the country’s 29 million citizens are in need of humanitarian assistance. “The world is facing unprecedented humanitarian emergencies—as well as a political crisis of inaction by world leaders,” they warn. END_OF_DOCUMENT_TOKEN_TO_BE_REPLACED This should be a global scandal,” said journalist Aaron Maté on the suppression of evidence from experts from the Organization for the Prohibition of Chemical Weapons (OPCW) in order to push for war in Syria. “This is the U.S. government bombing Syria based on allegations that were later found by the investigating team to be false. But then once that team came back to write their report they were pressured by the U.S. government and had their evidence censored.” END_OF_DOCUMENT_TOKEN_TO_BE_REPLACED

The Comment by Hamid Yahiya Hussain and Kasturi Sen (September, 2020)
1

rightly drew attention to the damage being inflicted on Syria by EU and US sanctions. However, by concentrating on the impact of sanctions on humanitarian interventions, their Comment did not illustrate the full extent of that damage.

END_OF_DOCUMENT_TOKEN_TO_BE_REPLACED

How USA and Turkey Plunder and Loot Syria with Impunity

While President Trump lashes out at rioting and looting in Portland and Kenosha, half way around the world, the USA and Turkey are plundering and looting Syria on a vastly greater scale with impunity and little publicity.

Turkey has been plundering the Syrian infrastructure for years.  Beginning in late 2012 and continuing through 2013 some 300 industrial factories were dismantled and taken to Turkey from Aleppo, the industrial capital of Syria. “Machinery and goods were loaded on trucks and carried off to Turkey through the Cilvegozu and Ceylanpinar crossings. Unfortunately, ‘plundering’ and ‘terror’ have become permanent parts of the Syrian lexicon when explaining their saga.” END_OF_DOCUMENT_TOKEN_TO_BE_REPLACED

To Capture and Subdue: America’s Theft of Syrian Oil Has Very Little To Do With Money Near the end of July, one of the most important recent developments in U.S. foreign policy was quietly disclosed during a U.S. Senate hearing. Not surprisingly, hardly anybody talked about it and most are still completely unaware that it happened. END_OF_DOCUMENT_TOKEN_TO_BE_REPLACED

Since 2011, the US and allies have promoted, trained and supplied militants trying to bring about “regime change” in Damascus. Having failed in that effort, they have tried to strangle Syria economically. The goal has always been the same: to force Syria to change politically. This month, June 2020, the aggression reaches a new level with extreme sanctions known as the Caesar Syria Civilian Protection Act.

The new law is fraudulent on two counts. It is called “Caesar” in reference to a 2014 propaganda stunt involving an anonymous Syrian who was alleged to be a military photographer. He claimed to have 55,000 photos showing about eleven thousand victims of Syrian government torture. As the Christian Science Monitor said at the time, the “Caesar” report was “A well-timed propaganda exercise funded by Qatar.”  A 30 page analysis later confirmed that the “Caesar” report was a fraud with nearly half the photos showing the OPPOSITE of what was claimed: they documented dead Syrian soldiers and civilian victims of  “rebel” car bombs and attacks. END_OF_DOCUMENT_TOKEN_TO_BE_REPLACED