Environment is human right, said and resolved a recent UN meet. It’s a reiteration of an already discussed issue–essential to all of the human society. It’s a much important issue to the peoples in countries facing forces ravaging environment; and, ravaging of environment is an act against people as the act denies people’s right to life and existence.

Reiterating and implementing the environment right empowers people, created/widens people’s space for a democratic life, as environment itself is an area for democracy, for people’s participation. There’s no scope for individualism, neither for person nor for capital–irrespective of capital’s power–in the area of environment. The reasons:

[2] No capital or an alliance of capitals create/can create livable environment with its own power. Without labor, capital is lame, useless–incapable of moving a single grain of sand a millimeter.

END_OF_DOCUMENT_TOKEN_TO_BE_REPLACED

REPOSTED DUE TO INCREASED RELEVANCY

If there is one thing that still unites Americans across the ever more intellectually suffocating and bitterly polarized political spectrum our imaginations have been crammed into like rush hour commuters on the Tokyo Metro, it’s our undying love of identity politics.

Why do we love identity politics? We love it for many different reasons.

END_OF_DOCUMENT_TOKEN_TO_BE_REPLACED

Over the past few months President Trump has unilaterally by Tweet and telephone begun to dismantle the U.S. military’s involvement in the Middle East. The irony is amazing, because in a general overarching narrative sense, this is what the marginalized antiwar movement has been trying to do for decades.1

Prof. Harry Targ, in his important piece “United States foreign policy: yesterday, today, and tomorrow,” (MR online, October 23, 2919), reminds us of the factional dispute among U.S. foreign policy elites over how to maintain the U.S. empire. On the one hand are the neoliberal global capitalists who favor military intervention, covert operations, regime change, strengthening NATO, thrusting China into the enemy vacuum and re-igniting the Cold War with Russia. All of this is concealed behind lofty rhetoric about humanitarianism, protecting human rights, promoting democracy, fighting terrorism and American exceptionalism. Their mantra is Madeleine Albright’s description of the United States as the world’s “one indispensable nation.” END_OF_DOCUMENT_TOKEN_TO_BE_REPLACED 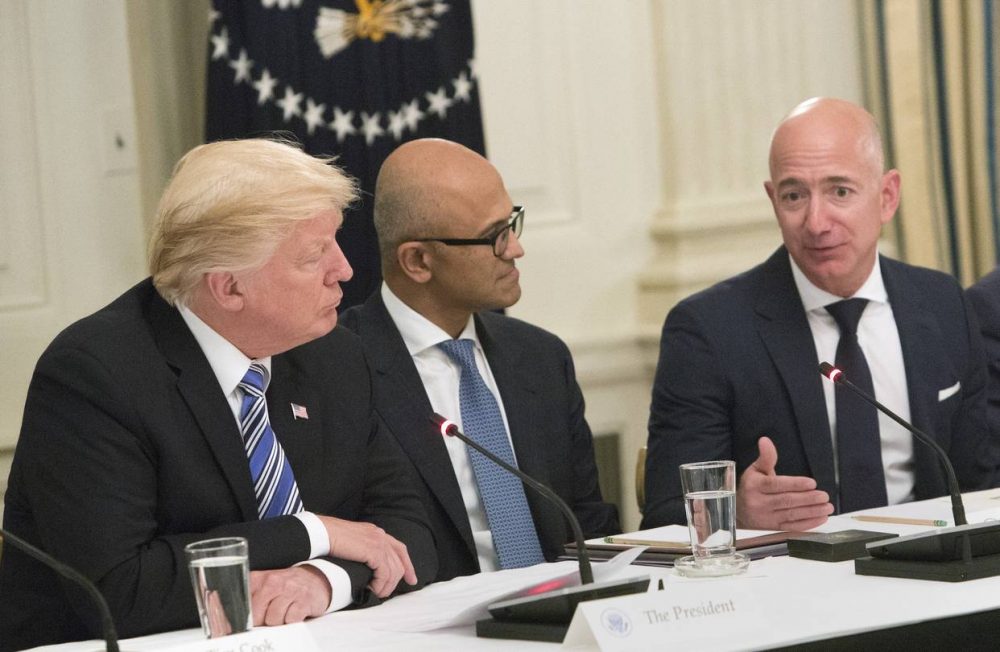 Jeff Bezos, considered to be the richest man on earth in terms of measurable wealth, and Donald Trump, arguably the most powerful man on earth as President of the United States, are figuratively at each other’s throats. US media is abuzz with talk of genital photographs, blackmail allegations, sexual misconduct, and media bias. However, those who look deeper may see bigger differences and hidden rivalries at stake. Two hostile camps have emerged within the circles of American power. END_OF_DOCUMENT_TOKEN_TO_BE_REPLACED

The war between the Trump Administration and the FBI reflects a deep division in the U.S. capitalist ruling class that could have far-reaching consequences for the progressive movement. The immediate cause stems from the investigation by Robert Mueller into Trump’s ties with the Russians, his collusion with their effort to interfere in the 2016 election, and his efforts to “obstruct justice” by sabotaging Mueller’s probe. END_OF_DOCUMENT_TOKEN_TO_BE_REPLACED

Thousands protested in London on Saturday calling for British Prime Minister David Cameron to step down over the Panama Papers. (Photo: The Weekly Bull/flickr/cc)

The Panama Papers leak offer for the first time a clear understanding of how world elites engage in shady financial mechanisms to avoid paying taxes and thus contribute to the financing of their national welfare system and development efforts.  END_OF_DOCUMENT_TOKEN_TO_BE_REPLACED