END_OF_DOCUMENT_TOKEN_TO_BE_REPLACED

The failed coup was the first victory of the Venezuelan people against US imperialism in the 21st century. It marked the beginning of the resistance of Venezuelans against the US attacks, which continue to this day

April 13, 2022, marked 20 years since the people of Venezuela defeated the US-backed right-wing coup against the democratically elected socialist president Hugo Chávez in a record time of less than two days.

On Wednesday, hundreds of thousands of Venezuelans flooded the streets of the capital Caracas to commemorate the 20th anniversary of the historic victory of the people against the imperialist coup. Multitudes of citizens, members of political organizations, social movements and trade unions gathered in various parts of Caracas and marched to the Miraflores presidential palace to pay tribute to the civic-military uprising that beat the coup, rescued Commander Chávez and reinstated constitutional order in the country.

END_OF_DOCUMENT_TOKEN_TO_BE_REPLACED

Today, July 28, Venezuelans are commemorating the 67th anniversary of the birth of Commander Hugo Chávez; a date of special significance for our People and other Peoples of the world, who recognize the important contributions of the historic leader of the Bolivarian Revolution.

Undoubtedly, the debate on the legacy of the Eternal Commander touches all of us revolutionaries deeply, given the dimension of the work he carried out, always faithful to the ideology of another birthday boy of the month of July: the Liberator Simón Bolívar; a work whose historical transcendence has its essence in having awakened the hope of profound changes and significantly transformed the reality of the country, and why not to say it, of the planet. Chávez’s struggle led Venezuela towards a better destiny and placed it at the forefront of the construction of a new international geopolitics, with an outstanding role in the integration of the Peoples of Our Latin America and the Caribbean and, beyond, of the Global South.

END_OF_DOCUMENT_TOKEN_TO_BE_REPLACED

In anyone’s life, the years of greatest impact for character training, learning skill and even human values are children’s and youth years. Sure, it doesn’t mean there’s a foolproof formula to create heroes or geniuses, or else we all were.
But the curiosity arises to see how Hugo Chavez’s formative years were before he took his course in the military career.
What can we detect before Chavez became an adult that could have influenced his historical history in Latin America? END_OF_DOCUMENT_TOKEN_TO_BE_REPLACED 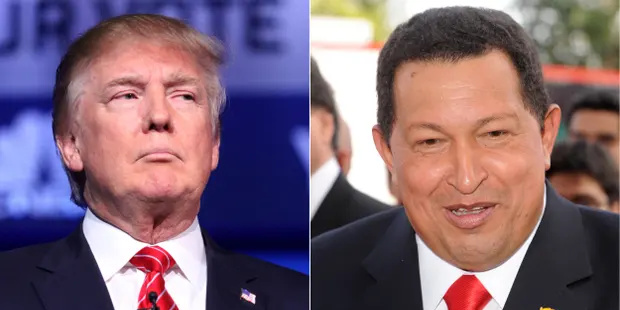 What better time to vilify the popular former leader of a country under deadly US siege than a deadly pandemic?

END_OF_DOCUMENT_TOKEN_TO_BE_REPLACED

Edgar Perez, better known as “Gordo Edgar,” participated in the most important events in recent Venezuelan history, from the Caracazo to the 4F insurrection to the anti‐coup mobilization that brought Chavez back to office in April 2002. A well-known personality in the popular movement, Edgar grew up in the 23 de Enero barrio in Caracas, but most of his activism took place in La Vega, a very poor barrio that, like 23 de Enero, takes pride in its history of rebellion and grassroots organization. Growing up in the ‘60s and ‘70s, Edgar calls La Vega, where we interviewed him, “a school for revolutionaries.” In this conversation, “Gordo Edgar” reflects on the vicissitudes of the popular movement while analyzing the role of Hugo Chavez in the Venezuelan revolution.

END_OF_DOCUMENT_TOKEN_TO_BE_REPLACED

Chávez was the Venezuelan people, he was one of them, he was born of them, and he maintained that spirit of origin. Photo: AVN

Ignacio Ramonet, in the book My First Life, an extended interview with Hugo Chávez, describes how: “We had arrived at the center of the infinite Venezuelan plains the day before (…) the cracked, hardened earth around us was dotted with colorful bushes, splendid giant fruit trees flowering.” They were in the land of Chávez, the boy who sold dulce de lechosa (papaya in syrup), the man who embodied Venezuela’s longing for freedom, and set out to raise a rebellious continent and lead it on the path to its second independence. END_OF_DOCUMENT_TOKEN_TO_BE_REPLACED

Venezuela’s Bolivarian Revolution, which took off with the election of President Hugo Chávez in December 1998, frequently and even quite recently received praise for its social gains from the United Nations, international humanitarian organizations and economists. This aspect of the country’s story has been almost entirely written out of media coverage of the effort to overthrow the Venezuelan government by the US, Canada and their right-wing partners in Venezuela and the region.

Malnutrition in children under five was one of several social indicators that improved dramatically in Venezuela following the election of Hugo Chávez in 1999. (Source: Instituto Nacional de Nutrición/CEPR) END_OF_DOCUMENT_TOKEN_TO_BE_REPLACED