Some of the critical thresholds that, when crossed, lead to large and often irreversible changes in the climate system, may have already been passed due to 1.1°C of global heating since the Industrial Revolution, researchers said.

These could include the collapse of Greenland’s ice cap and a key current in the north Atlantic, the disruption of rain patterns upon which billions of people depend for food and an abrupt melting of carbon-rich permafrost.

END_OF_DOCUMENT_TOKEN_TO_BE_REPLACED

“Greenland has suspended all new oil and gas exploration, the country’s government announced Thursday. Government officials said they believe the ‘price of oil extraction is too high,’ citing both economic considerations and the fight against climate change.

A report by The Weather Network (Greenland government puts an end to new oil and gas exploration, July 22, 2021) said:

“The Greenlandic government, Naalakkersuisut, has announced that the country will no longer issue new licenses for oil and gas exploration. A draft-bill was also issued to ban the preliminary investigation, exploration, and extraction of uranium.

“A study from The Geological Survey of Denmark and Greenland (GEUS) estimates that there are DKK 18 billion (approximately $3 million USD) de-risked barrels of oil on the west coast of Greenland as well as “large deposits” of oil underneath the ocean floor off the country’s east coast.

“However, the announcement that came on July 19 states that there are several reasons why future oil extraction will not be permitted.

“‘The Greenlandic government believes that the price of oil extraction is too high. This is based upon economic calculations, but considerations of the impact on climate and the environment also play a central role in the decision,’ the announcement states.

“Scientists say that Greenland and other regions in the Arctic are amongst the fastest warming places on the planet. A study (Niklas Boers and Martin Rypdal, “Critical slowing down suggests that the western Greenland Ice Sheet is close to a tipping point”) published in Proceedings of the National Academy of Sciences of the United States of America (PNAS) states that the central-western part of the Greenland Ice Sheet could ‘undergo a critical transition relatively soon’ and that the entire island could be ice-free by the year 3000.

“In addition to the concerning rate of disappearing ice, other impacts from the thawing landscape include rising levels of mercury in meltwater and drastic changes in biodiversity.

“‘Naalakkersuisut takes climate change seriously. We can see the consequences in our country every day, and we are ready to contribute to global solutions to counter climate change. Naalakkersuisut is working to attract new investments for the large hydropower potential that we cannot exploit ourselves. The decision to stop new exploration for oil will contribute to place Greenland as the country where sustainable investments are taken seriously,’ stated Kalistat Lund, the Minister for Agriculture, Self-sufficiency, Energy and Environment.”

Greenland has four active exploration licenses, owned by two small companies, that the government will still be required to respect as long as licensees are still exploring, The Associated Press reported.

The Greenland government also announced that it has sent out a draft bill for consultation that would ban preliminary investigation, exploration and extraction of uranium.

“The Greenlandic population has based its livelihood on the country’s natural resources for centuries, and the ban on uranium mining is rooted in a profound belief that business activities must take nature and the environment into account,” Naalakkersuisut said in a statement.

The study report “Critical slowing down suggests that the western Greenland Ice Sheet is close to a tipping point” said:

“The Greenland Ice Sheet (GrIS) is a potentially unstable component of the Earth system and may exhibit a critical transition under ongoing global warming. Mass reductions of the GrIS have substantial impacts on global sea level and the speed of the Atlantic Meridional Overturning Circulation, due to the additional freshwater caused by increased meltwater runoff into the northern Atlantic. The stability of the GrIS depends crucially on the positive melt-elevation feedback (MEF), by which melt rates increase as the overall ice sheet height decreases under rising temperatures. Melting rates across Greenland have accelerated nonlinearly in recent decades, and models predict a critical temperature threshold beyond which the current ice sheet state is not maintainable. We investigate long-term melt rate and ice sheet height reconstructions from the central-western GrIS in combination with model simulations to quantify the stability of this part of the GrIS. We reveal significant early-warning signals (EWS) indicating that the central-western GrIS is close to a critical transition. By relating the statistical EWS to underlying physical processes, our results suggest that the MEF plays a dominant role in the observed, ongoing destabilization of the central-western GrIS. Our results suggest substantial further GrIS mass loss in the near future and call for urgent, observation-constrained stability assessments of other parts of the GrIS.”

“During the last century, the Greenland Ice Sheet (GrIS) has lost mass at an accelerating rate. The mass loss is caused by solid ice discharge into the North Atlantic and surface melting due to increasing temperatures. The relative contribution of the latter has increased from 42% before 2005 to 68% between 2009 and 2012, and surface runoff caused 84% of the increase in mass reduction since 2009. The complete melting of the GrIS would cause a global sea level rise of more than 7 m. Continued melting of the GrIS has been suggested to potentially lead to a collapse of the Atlantic Meridional Overturning Circulation via increased freshwater flux into the North Atlantic, which may, in turn, trigger a cascade of transitions in additional tipping elements such as the Amazon rainforest and the tropical monsoon systems.”

The global sea level rose by 1.8 centimetres because of the rapid melting rates of the ice sheets since the 1990s. Increasing melting rates will raise sea levels by a further 17 cm, according to the study led by Tom Slater from the Centre for Polar Observation and Modelling at the University of Leeds, United Kingdom. END_OF_DOCUMENT_TOKEN_TO_BE_REPLACED 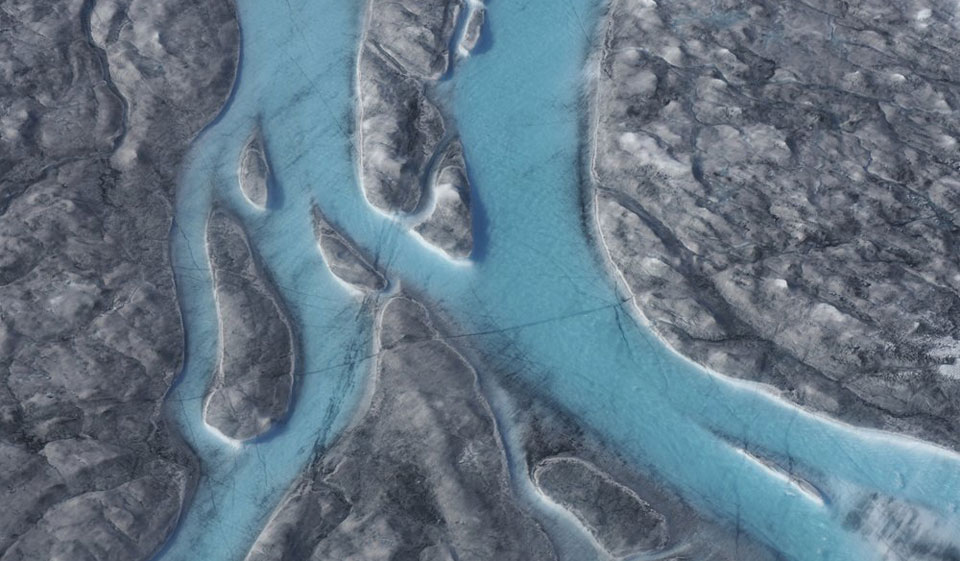 In this image taken on Thursday Aug.1, 2019 large rivers of melting water form on an ice sheet in western Greenland and drain into moulin holes that empty into the ocean from underneath the ice. The heat wave that smashed high temperature records in five European countries a week ago is now over Greenland, accelerating the melting of the island’s ice sheet and causing massive ice loss in the Arctic. (Photo via Caspar Haarløv, Into the Ice via AP)

BERLIN (AP) — The heat wave that smashed high temperature records in five European countries a week ago is now over Greenland, accelerating the melting of the island’s ice sheet and causing massive ice loss in the Arctic.

Greenland, the world’s largest island, is a semi-autonomous Danish territory between the Atlantic and Arctic oceans that has 82% of its surface covered in ice.

END_OF_DOCUMENT_TOKEN_TO_BE_REPLACED

The World Meteorological Organization (WMO) called the wildfires now burning around the Arctic “unprecedented.” A rare fire even ignited in Greenland, amid unusually hot and dry weather.

The Unprecedented # in #Arctic. Over past 6 weeks @ #Atmosphere Monitoring Service (CAMS) has tracked more than 100 intense fires in the Arctic Circle. In June alone, these fires emitted 50 megatonnes of CO2 into the atmosphere = Sweden’s total annual emissions. END_OF_DOCUMENT_TOKEN_TO_BE_REPLACED 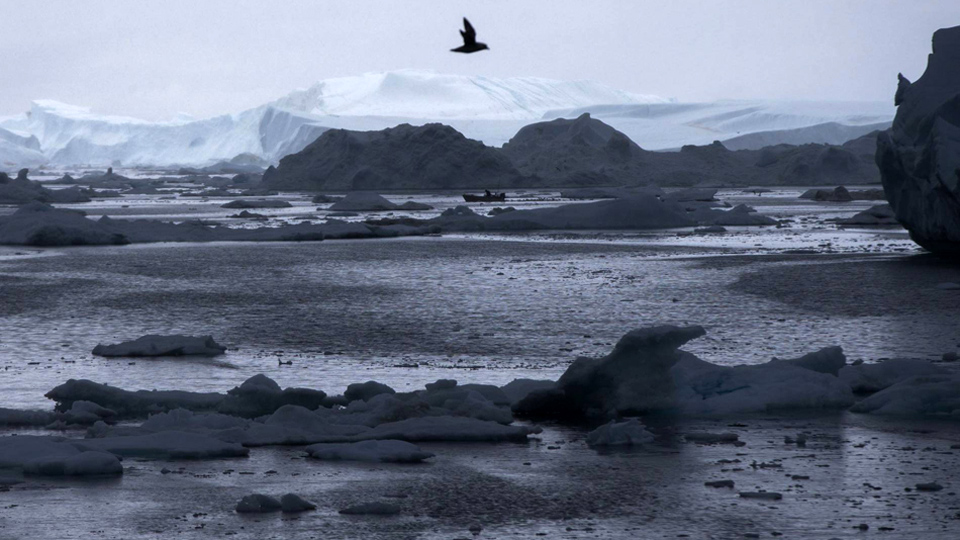 Greenland and other parts of the world are experiencing a troubling phenomenon. It sounds like something out of post-apocalyptic fiction, but the dark snow falling on land ranging from the Arctic to the Himalayas is quite real. The black material found in the snow is comprised of dust and soot. It’s called cryoconite, and it’s largely the product of forest fires and man-made global warming. In terms of both climate and pollution, it’s a sign that things are getting worse. END_OF_DOCUMENT_TOKEN_TO_BE_REPLACED

An iceberg melts away in 2012, the last year of record-setting heat in Greenland. Conditions in 2016 feel “eerily similar” to that year, one climate scientist says. (Photo: wilco737/flickr/cc)

Greenland’s ice sheet has started melting so early that scientists initially thought their models had broken when they saw the record-breaking measurements.