Communist Parties from Russia to Chile and from Turkey to Mexico express their condolences for the death of the legendary Greek composer Mikis Theodorakis who died on September 2nd aged 96.

In a message published on Twitter the President of the Republic of Cuba Miguel Díaz-Canel Bermúdez pays tribute to the late composer:

“Mikis Theodorakis died and the world accompanies the mourning of Greece for one of the greatest musicians of all times. Cuba, which always had his militant solidarity, also mourns. Let the Canto General sound in his memory”.

END_OF_DOCUMENT_TOKEN_TO_BE_REPLACED

Thousands of Students Mobilize in Greece Against New Education Bill

Scores of students hit the streets of Greece against a regressive education bill which they say will gag dissent on campuses. END_OF_DOCUMENT_TOKEN_TO_BE_REPLACED 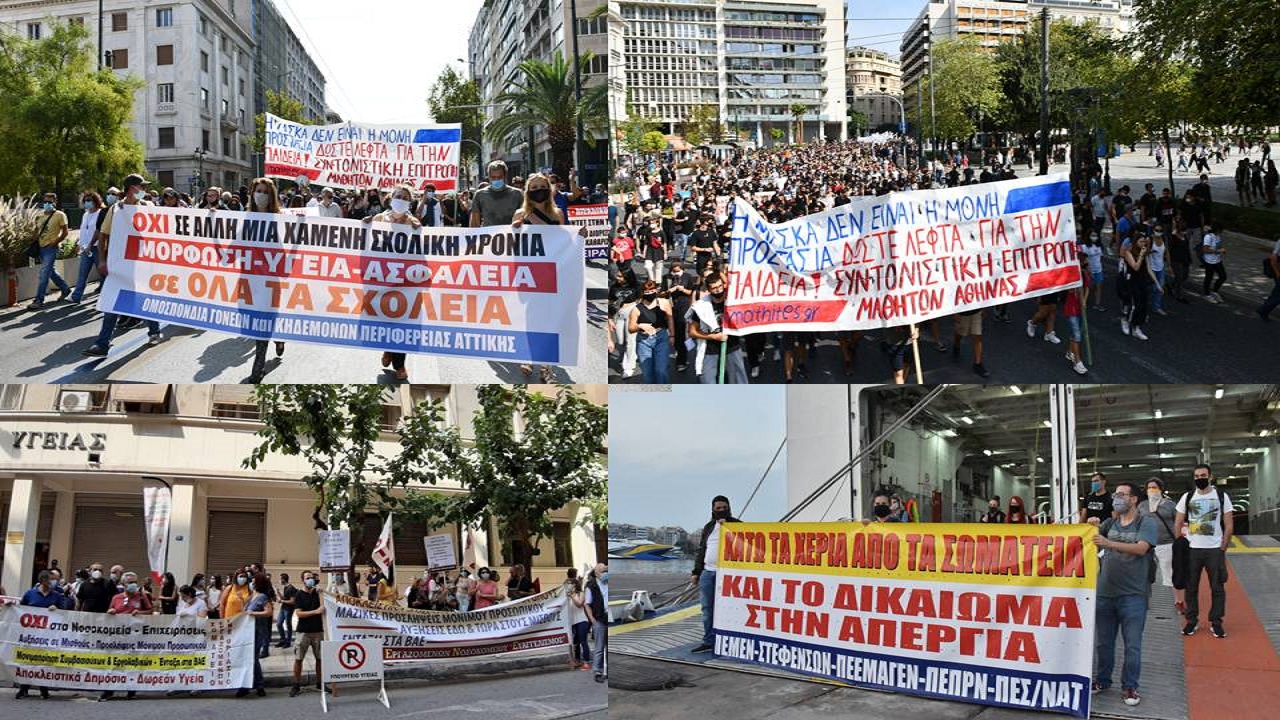 In the education sector, teachers and students’ unions, along with parents’ organizations, held demonstrations. The Public Hospital Doctors’ Federation (OENGE) observed a national strike and held demonstrations in all major cities of Greece. Their main demands were immediate measures to support doctors and healthcare workers in public hospitals against the pandemic. Maritime workers went on strike in Greece’s biggest port, Piraeus, protesting the attempt of the government to undermine collective contracts. END_OF_DOCUMENT_TOKEN_TO_BE_REPLACED

Greece 2015: There was an alternative

Preface by Michael Roberts
ISBN: 978-0-902869-70-7
RRP £15, €18, $20; 260pages
Published by Resistance Books, IIRE and CADTM
2015 will be a landmark in the history of Greece, Europe and the Left. This book can be used as a guide for readers who are content neither with the mainstream narrative spun by major media and creditors, nor with former Finance Minister Yanis Varoufakis’s version in his book Adults in the Room.

END_OF_DOCUMENT_TOKEN_TO_BE_REPLACED

THE Greek government has left refugees detained in the massively overcrowded Moria camp on Lesbos without any supplies or information on the coronavirus pandemic, according to people trapped in the camp.

Speaking to volunteers from German refugee rescue charity Mission Lifeline in the camp yesterday, Sayed (not his real name) said the Greek government has done nothing.

“They have not [provided] any [information] or anything that could help people understand what coronavirus is and how to prevent it and how to not get infected by it,” he said. END_OF_DOCUMENT_TOKEN_TO_BE_REPLACED

The ruling SYRIZA (Coalition of the Radical Left) party in Greece faced severe setbacks in the European Parliament elections and local body elections held on May 26. In the wake of the electoral defeat, Greek prime minister Alexis Tsipras called for early parliamentary elections, which will be held by the first week of July. The center-right New Democracy (ND) party emerged the leader, both in the European parliamentary elections, as well as the local body polls. END_OF_DOCUMENT_TOKEN_TO_BE_REPLACED

Austerity and poverty now dominate Greek life. Poverty in the country is not much different than the un-developed South. Greece, a capitalist economy, also faces serious income inequality

“Over the past seven years, austerity has left visible scars in Greece’s capital.

“A walk around Athens reveals more homeless people than ever despite some signs of a rosier economic outlook. Thousands of shops, mostly small businesses, are shuttered here and across the country. In what used to be a busy shopping arcade, closed stores are padlocked against a backdrop of hanging Greek flags. END_OF_DOCUMENT_TOKEN_TO_BE_REPLACED

But, under pressure especially from Berlin, Greece’s 18 other euro partners have not yet broached the issue of debt relief, preferring to push that hot-button topic to next year.

Protesters in Greece took to the streets this week to criticize the government for going along with public sector cuts imposed by the IMF and the EU. Government spokesman Dimitris Tzanakopoulos accused the opposition of being behind a strike.

Greece is in its seventh years of austerity sought by international creditors in return for bailouts. END_OF_DOCUMENT_TOKEN_TO_BE_REPLACED

GRINDING austerity and mounting social crisis. Industrial output falling in the last quarter. A €7 billion euro debt repayment in five months’ time. No money in the government coffers to meet it. European Union institutions holding back promised instalments of a previous bailout until further assaults on working people are rammed through.

If that all seems familiar, it is because that snapshot of Greece today is eerily similar to exactly this time two years ago. END_OF_DOCUMENT_TOKEN_TO_BE_REPLACED