This must be a rare page in American diplomatic history that a US Secretary of State has been literally off his rocker. Antony Blinken’s outbursts on the events in Kazakhstan were not only boorish but also illogical.

Blinken questioned the decision by the president of Kazakhstan Kassym-Jomart Kemelevich Tokayev to request help from the Collective Security Treaty Organisation (CSTO) to deploy forces to help stabilise the grave situation in his country. He said it was unclear why the deployment was happening!

Moscow had emphasised right at the outset that the CSTO deployment would be temporary.  Nonetheless, Blinken sniped that “one lesson of recent history is that once Russians are in your house, it’s sometimes very difficult to get them to leave”.

END_OF_DOCUMENT_TOKEN_TO_BE_REPLACED 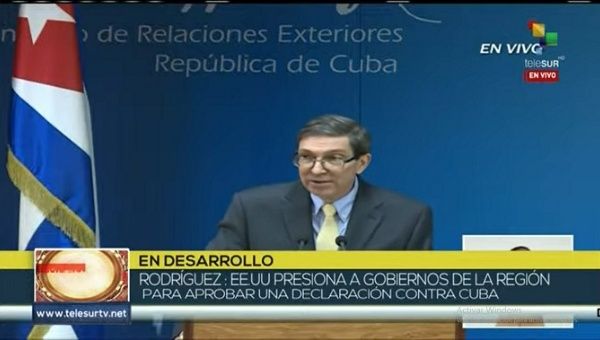 The Foreign Minister explained that, unlike previous comments, now Joe Biden considers Cuba among its top priorities and it will increase the pressure against the island. | Photo: Twitter/ @BrunoRguezP

Rodriguez Parilla explained that “CNNEspañol disrespects the right of Americans and citizens of the world to receive free and truthful information in the same way that FOX channel manipulates images and videos with high technology.”

END_OF_DOCUMENT_TOKEN_TO_BE_REPLACED

Common sense in the face of the implausible and distrust in the face of unprecedented events should prevail whenever you read any information, especially on the internet

Cuba is under fire from a cyber attack, one of the techniques used as part of the unconventional war that has been waged against our nation.

Computer aggression includes the attack on institutional digital platforms and the country’s press media; and the media bombardment is based on the manipulation of all possible audiences based on speculation about fictitious realities and the sowing of terror or discontent in the population.

News montages are becoming more common every day. People and the media at the service of the economic and political interests that move behind what has happened in Cuba since Sunday, July 11, build parallel narratives using various tools, including false news or fake news.

END_OF_DOCUMENT_TOKEN_TO_BE_REPLACED

There is room in our country for debate and differences of all kinds – policies included -, what is not ethical or permissible is to try to solve them with the rule of law of the jungle, baseness or backstabbing, or mixing with the perpetrators of acts as uncivilized as the assault with stones at the pediatric hospital in Cárdenas, with patients, companions and medical personnel inside

They said that Raúl fled, that Camagüey was taken and kidnapped the First Secretary of the Party there, that the Vice Minister of the Interior resigned, that the streets are full of the dead and, by telling and lying, they even showed Alexandria and Buenos Aires as if they were Havana .

Most likely, they continue saying, because that has been one of their most recurrent weapons, since they tried to exalt Sosa Blanco’s “human values”, they presented the Escambray rebels as defenders of the people and not as vulgar terrorists, or fabricated that insurmountable compendium of misinformation in the days of Playa Girón, when, according to reports from press agencies, the invading forces took Pinar del Río and the Isle of Pinos, Fidel fled and Raúl was captured, Habana Libre was destroyed by the bombings and “the port of Bayamo was totally isolated.”

END_OF_DOCUMENT_TOKEN_TO_BE_REPLACED

Fidel lived, thought and acted for his times and for those to come. This is why the Revolution is a legacy we are obliged to give continuity

Fidel lived, thought and worked for his times and for those to come. This is why the Revolution is a legacy we are obliged to give continuity. Nothing was ever easy for the Revolution, not at the time of its forging, nor at times of keeping it afloat, and this is why it has been a crucible of brave men and women, made for difficult times.
This is what Fidel said in 1992, on the occasion of the 39th anniversary of the September 5th uprising against the Batista dictatorship:

END_OF_DOCUMENT_TOKEN_TO_BE_REPLACED

Alan MacLeod tweets: A ton of corporate media, including the Financial Times, Fox News, The New York Times and The Guardian have used a pic of a PRO-govt rally in Cuba to illustrate their articles on anti-government protests, falsely claiming the huge crowds to be on the side of the US.

Yesterday, the Midwestern Marx co-founders got together to discuss the recent imperialist attacks on Cuba. In the podcast below, Carlos and Edward analyze the Cuban protests in their historical context; beginning from the development of colonial monocropping and the subsequent sugar and tobacco dependency created on the Cuban economy thereof, to the revolution, the process of industry nationalization, and the last 60+ years of the US blockade (which includes military, biochemical, and ideological attacks). Situating the condition in Cuba in its proper historical position, the focus is then turned towards the recent build up towards these protests, which include the US’ exploiting of the pandemic to intensify the conditions created by the reinstatement of the blockade via the Trump administration, the US funding of opposition groups in Cuba, and the role Cuban-opposition artist have played in furthering the imperialist narrative. The duo also examines the role and tactics western media has used to manufacture consent for these opportunists, as well as how they have been able to blow the scope of the protests out of proportion while ignoring the substantially larger pro-revolution crowds that hit the streets after Diaz-Canel’s called on them to defend the revolution. Watch our podcast interview below if you want a complete picture of the current situation in Cuba.

END_OF_DOCUMENT_TOKEN_TO_BE_REPLACED

Imperialist media and its followers are over-active in circulating the news: Protests and loot in Cuba. Then, they draw conclusion: The people in Cuba are rejecting socialism.

Thus, the media-masters cheer and draw conclusion while they show their ignorance in drawing demarcation line between socialism and communism, as the two systems are far-far different.

Nothing to hide: There’re protests in Cuba.

Nothing to hide: There’s incident of loot.

The issue for consideration is what goods were looted. Do food-hungry people loot TV and electronics goods? The masters of the mainstream media obviously have an answer. The looters weren’t food-hungry if TV, etc. were looted. Or, there’s little scope for going hungry if stores were stashed with food products.

The fact-manipulation-efficient-masters have made a mistake in their fabrication of “facts” of protests. The fact that comes out from this inconsistency is there’s something fishy, smelling rotten.

END_OF_DOCUMENT_TOKEN_TO_BE_REPLACED Do Not Belittle Protesters In U.S By Calling Their Struggle A “Color Revolution”!

For almost a decade, I have been covering “Color Revolutions” in virtually all parts of the world. While making a film for TeleSur, I was facing Egyptian tanks, risking my life under sniper fire, getting roughed-up in the middle of clashes of the supporters of al-Sisi and Morsi.

Together with Syrian commanders, I was also facing the terrorists in Idlib; challenged the Ukrainian fascists; encountering Bolivian indigenous elders high in the Altiplano, after the revolution of Evo Morales and MAS was crashed by the U.S.-sponsored coup in 2019. I regularly worked in Venezuela, Lebanon, and Iraq. And of course, again and again, I have been returning to Hong Kong, reporting on systematic Western attempts to radicalize SAR’s youth and to harm China.