Suspicious information has recently surfaced about the handling of Venezuelan assets abroad, this time referring to possible behind-the-scenes negotiations between members of the Guaidó gang and the US oil company ConocoPhillips.

A document from the US District Court of Delaware was recently revealed which suggests that an agreement was made by Juan Guaidó’s “government” to benefit ConocoPhillips, in the order of a little over $1.287 billion in the form of claims made by ConocoPhillips to Venezuela.

END_OF_DOCUMENT_TOKEN_TO_BE_REPLACED

The Trump administration’s deadly intent to bring down the elected government of Venezuela has been on full display in recent months, as it tightened already severe sanctions, placed a $15 million bounty on President Nicolas Maduro’s head, conducted provocative military maneuvers off the country’s coast, and provided overt and covert support for a coup attempt and an adventurist “invasion” by a small band of armed mercenaries.

These interventions are nothing new. The US government orchestrated a failed coup against Venezuela’s legitimately elected President Hugo Chavez in 2002. A major aggressive policy escalation by the US occurred in 2015 when President Barack Obama declared that Venezuela posed a national threat to the US and therefore the US could impose sanctions on the struggling Latin American country. END_OF_DOCUMENT_TOKEN_TO_BE_REPLACED 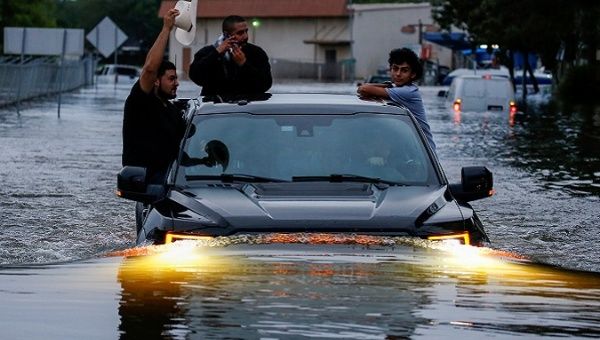 Residents use a truck to navigate through floodwaters from Harvey in Houston, Texas. | Photo: Reuters

Houston’s mayor expressed his appreciation for the generous donation, stating, “We are overwhelmed by the support from our corporate partners including Citgo.”

Venezuela has provided free gas to rescues workers, firefighters and police in their efforts to help victims in areas affected by Harvey, the Foreign Ministry said Saturday.