The ecosystems of the world that support life like Brazil’s Amazon rainforest have an incompatible relationship with far right governments, like the United States under Trump, who took a baseball bat to the EPA.  According to Christine Todd Whitman, who headed EPA under George W. Bush: “I’ve never seen such an orchestrated war on the environment or science.” (How Trump Damaged Science – Why It Could Take Decades To Recover, Nature, Oct. 5, 2020)

As devastating as Trump (4 more years?) was for the environment, President Jair Bolsonaro’s MBGA or Make Brazil Great Again has one-upped Trump. He’s single-handedly destroying the world’s largest rainforest. It may be the single most important ecosystem for the survival of Homo sapiens. As such, with such a big important target to ravage, Bolsonaro’s making Trump look weak.

END_OF_DOCUMENT_TOKEN_TO_BE_REPLACED

The urban centres are the first to be discovered in the region, challenging archaeological dogma.

Mysterious mounds in the southwest corner of the Amazon Basin were once the site of ancient urban settlements, scientists have discovered. Using a remote-sensing technology to map the terrain from the air, they found that, starting about 1,500 years ago, ancient Amazonians built and lived in densely populated centres, featuring 22-metre-tall earthen pyramids, that were encircled by kilometres of elevated roadways.

END_OF_DOCUMENT_TOKEN_TO_BE_REPLACED

Amazon workers at the Staten Island, New York Fulfillment Center are preparing to file for a union election with the National Labor Relations Board. As previously reported, workers at this location have already brought a lawsuit against Amazon with respect to working conditions and hazards, which was subsequently dismissed. Now, workers are preparing to unionize at this location.

Amazon has taken actions to dissuade unionization by reportedly confiscating pro-union literature and distributing anti-union flyers. The company has also slandered an organizer who was fired from the location due to his unionization effort. A leaked memo described organizer and former warehouse employee Christian Smalls as “not smart or articulate”.

END_OF_DOCUMENT_TOKEN_TO_BE_REPLACED

‘They track our every move’: why the cards were stacked against a union at Amazon

“Working at an Amazon warehouse is no easy thing. The shifts are long. The pace is super-fast. You are constantly being watched and monitored. They seem to think you are just another machine.”

So testified Jennifer Bates before a US Senate Budget Committee hearing into income and wealth inequality on March 17. Less than a month later her co-workers at Amazon’s fulfilment centre in Bessemer, Alabama, voted 1,798 to 738 against allowing the Retail, Wholesale and Department Stores Union into their workplace to represent them. END_OF_DOCUMENT_TOKEN_TO_BE_REPLACED

The tally was 71 percent no to 29 percent yes—though it’s possible the actual split was closer to 60-40, if you consider the large number of ballots that were cast but never counted because they were challenged by the company. END_OF_DOCUMENT_TOKEN_TO_BE_REPLACED

Locals and residents of Bessemer came out in support of the unionization drive by Amazon workers on March 20. Photo: Liberation

After more than seven weeks of ballot submissions, the workers at Amazon’s Bessemer warehouse in Alabama submitted their final votes on Monday, March 29, to decide whether or not they want a union. On Tuesday, March 30, the National Labor Relations Board (NLRB) began the count of over 5,800 ballots, the results of which could take the next couple of days to be released.

The unionization drive has grabbed national limelight over the past two months, not only because of the historical nature of the vote and the impact it could have on union organizing across the country, but also because it revealed the abysmal work culture at one of the United States’ largest employers. At the same time, the campaign unlike previous campaigns for unionizing Amazon workers managed to attract nationwide solidarity and support. END_OF_DOCUMENT_TOKEN_TO_BE_REPLACED

Facebook spent nearly $20 million during the 2020 election cycle while Amazon spent just under $19 million. Following them were telecoms giant Comcast, a third place, with $14.4 million, which is ahead of a slew of weapons manufacturers like Lockheed Martin, Boeing, and Raytheon. END_OF_DOCUMENT_TOKEN_TO_BE_REPLACED

Bernie asks Jeff Bezos: You are worth $182 billion … why are you doing everything in your power to stop your workers from unionizing?

“Bezos and Musk now own more wealth than the bottom 40%. Meanwhile, we’re looking at more hunger in America than at any time in decades,” Sanders said in his opening remarks at the Senate Budget Committee hearing, which was titled The Income and Wealth Inequality Crisis in America.

“If he was with us this morning, I would ask him the following question … Mr. Bezos, you are worth $182 billion – that’s a B,” Sanders said. “One hundred eighty-two billion dollars, you’re the wealthiest person in the world. Why are you doing everything in your power to stop your workers in Bessemer, Alabama, from joining a union?” END_OF_DOCUMENT_TOKEN_TO_BE_REPLACED 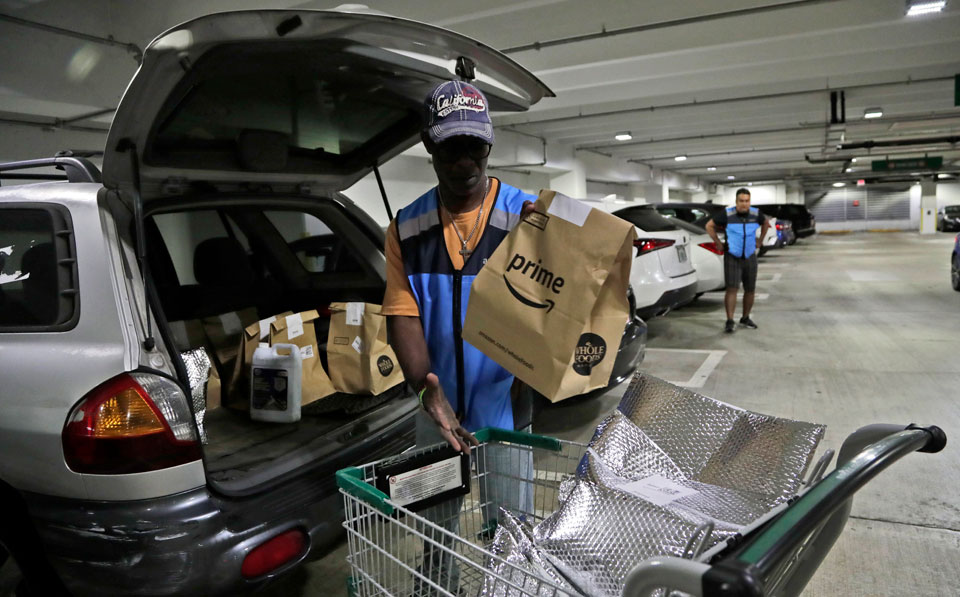 In this March 31, 2020, photo, Samuel Diaz, a contract delivery driver for Amazon, loads his own vehicle with groceries from Whole Foods, in Miami. In a settlement with the Federal Trade Commission, Amazon has agreed to pay back nearly $62 million in tips that it stole from delivery drivers. | Lynne Sladky / AP

If you read the headlines in the corporate press on Tuesday, you would have encountered stories about how Amazon, the world’s largest online retailer, had reached a settlement with the government after being accused of “withholding” tips from its contract delivery drivers.

The Chicago Tribune talked about how the company “didn’t pass on” tips left by customers. In the Washington Post, which is owned by Amazon big boss Jeff Bezos, the company was alleged to have “shortchanged” drivers—conjuring an image of an absentminded cashier who miscounted your pennies and nickels.

These were nothing but attempts to dress up the single ugly fact: a $1.6-trillion-dollar company stole from its employees and got caught. END_OF_DOCUMENT_TOKEN_TO_BE_REPLACED

AMAZON boss Jeff Bezos is paid more for one second than his warehouse workers earn in two months, analysis by the TUC revealed today.

The research shows that it would take an Amazon warehouse worker, typically on £9.50 an hour, more than eight weeks – or 284 hours based on a 35-hour week – to make what their chief executive pockets in a single second – estimated at roughly £2,700.

Mr Bezos is now paid over one million times more than the workers who create Amazon’s profits, according to the figures. END_OF_DOCUMENT_TOKEN_TO_BE_REPLACED