In three thematically distinct but closely interwoven chapters, Sebastian Truskolaski organizes the work of Theodor W. Adorno around the Old Testament ‘ban on images’ [Bilderverbot], treating the figure of this ban as an overlooked ‘leitmotif’ of Adorno’s work. As the author notes, this monograph’s intention is not a comprehensive overview of Adorno’s work, but a ‘reorganization’ of his ‘uncomfortably systematic “anti-system”’ (8). Through attention to the figure of the image ban, Truskolaski claims, we can understand the way in which Adorno’s political thought differs from those of his contemporaries, as well as ours. Tracing out the metaphysical, theological and aesthetic implications of the prohibition on images, Truskolaski’s masterful treatment of Adorno’s project thus works against dominant interpretations of the latter as a politically quietist or normatively impoverished project. This book is valuable not only as a contribution to ongoing debates concerning the political orientation of critical theory, however, but also as a well-structured introduction to a wide range of Adorno’s concerns.

END_OF_DOCUMENT_TOKEN_TO_BE_REPLACED 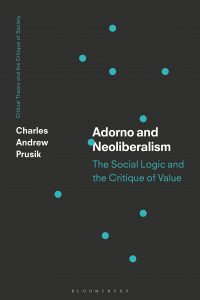 Adorno and Neoliberalism: The Critique of Exchange Society

In Adorno and Neoliberalism: The Critique of Exchange Society, Charles A. Prusik argues that Adorno’s critical theory can provide crucial resources for an understanding of neoliberal political economy and the forms of thought it generates, weaving an impressive knowledge of Adorno’s works and their reception with deep familiarity with Marxist and classical political economy, neoclassical and neoliberal economics, and political history. Prusik’s book is valuable for the way it works against the customary interpretation of the early Frankfurt School as a group of theorists departing from – rather than deepening – Marxist social theory. The Adorno of these pages is not so much an elitist forebear of apolitical aesthetics as a critic of capitalist society. END_OF_DOCUMENT_TOKEN_TO_BE_REPLACED