Thirty years since the victory of the counterrevolution and the overthrow of socialism in the Soviet Union, the supposed “heaven” that capitalism would bring in Russia has been proved nothing more than a deception.

The deeply anti-worker policies of the bourgeois governments, from Boris Yeltsin to the current administration of Vladimir Putin, leads more and more Russians to consider what they lost after the dissolution of the Soviet Union. Huge social achievements were abolished, the rich became richer and the poor became poorer, while the income for the working class families shrinks year by year. Capitalism has shown its real, repulsive, barbaric face to the working people of Russia.

END_OF_DOCUMENT_TOKEN_TO_BE_REPLACED

The past week has been quite intense in Russia – lots of interesting developments took place, and today I will mention three:

These are all truly huge developments for Russia which we need to look into separately.

END_OF_DOCUMENT_TOKEN_TO_BE_REPLACED

An associate of Navalny has announced that further protests will be postponed until the runup to the Duma elections in the summer. According to an RT report:

Lithuania-based Leonid Volkov, once the anti-corruption campaigner’s chief of staff, has been one of the leading organizers of the demonstrations held in a number of cities throughout the country over the past fortnight. However, in a video posted to the Navalny Live YouTube channel on Thursday evening, he said there would not be a repeat of the marches this week.

END_OF_DOCUMENT_TOKEN_TO_BE_REPLACED

POLITICS AND IMPERIALIST INTERVENTION IN RUSSIA

Is Russia Waking Up? 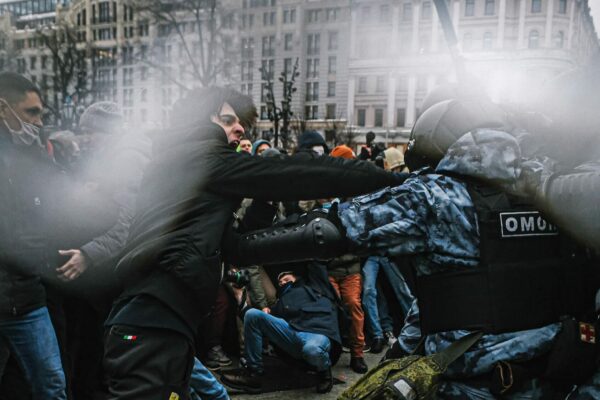 The following text was translated from Russian by Renfrey Clarke and has been edited for clarity. —Eds.

This text is being written in the heat of events immediately following the mass protests that occurred in most regions of Russia on 23 and 31 January 2021. The total number of protestors throughout the country on 23 January was put by the authorities at fewer than 10,000, but by the opposition much more. The largest of the demonstrations was, as usual, the one in Moscow, where according to the official count 4,000 people came onto the streets, while unofficial figures put much bigger number. Similar numbers took part in the protests on 31 January, but this time the clashes were much more fierce, and according to various accounts between 2000 and 4000 people were detained. END_OF_DOCUMENT_TOKEN_TO_BE_REPLACED 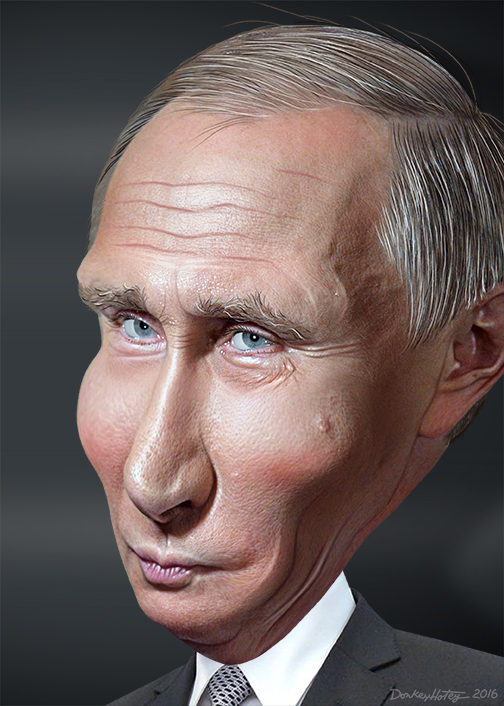 Russia is experiencing capital outflows due to the Russian private sector’s repayment of loans to Western creditors. Russia has experienced over $25 billion a year of capital outflows since the early 1990s, accumulating to over a trillion dollars. This money could have been invested in Russia itself to raise the productivity and living standards of its citizens. The outflow puts the ruble under pressure, and the interest payments draw money out of the country away from Russian uses.  If it were not for these outflows, the value of the ruble and Russian wages would be higher. END_OF_DOCUMENT_TOKEN_TO_BE_REPLACED 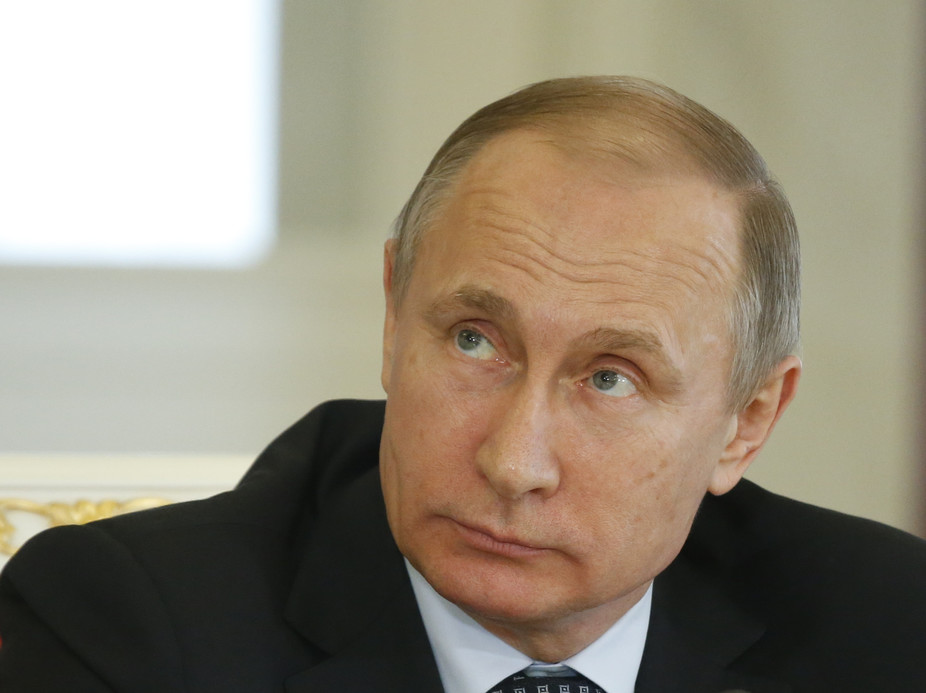 Putin’s latest assertion signals that the world imperialism is going to face tough days in future.

Vladimir Putin, the Russian president, said: “Either Russia is a sovereign country, or there is no Russia.”

The world imperialism is not habituated to listen to such assertions. It’s also a tough message to hirelings of the world imperialism. The masters and their lackeys have to review self-positions, both strategic and tactical, in light of Putin’s latest assertion: Not at the cost of sovereignty. END_OF_DOCUMENT_TOKEN_TO_BE_REPLACED 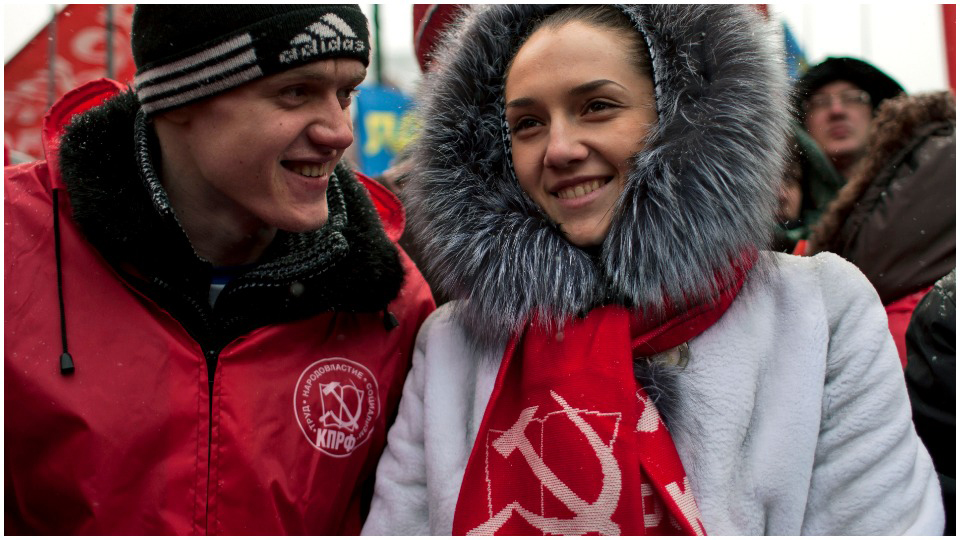 Young Communist Party supporters, both from the Russian town of Lipetsk, Vadim Putintsev, 21, and Olga Bykovskikh, 23, speak to each other during a rally protesting the alleged vote rigging in Russia’s elections. | Alexander Zemlianichenko / AP

For those watching abroad, Russia’s presidential election last weekend was unexciting. Vladimir Putin, who has ruled the country for 18 years, won easily, just as he was predicted to.

His 76 percent vote share—up 13 points on 2012’s—is evidence of either his enduring popularity as the leader of a resurgent Russia or the crooked nature of the election itself, depending on who you talk to. END_OF_DOCUMENT_TOKEN_TO_BE_REPLACED

RUSSIANS marked the 75th anniversary of the Red Army’s victory at the Battle of Stalingrad yesterday, attending a military parade and laying wreaths to honour the soldiers who died defending the city. END_OF_DOCUMENT_TOKEN_TO_BE_REPLACED

Thousands of opposition supporters rallied across Russia against government corruption on March 26, 2017. The protests may be the biggest anti-Kremlin protest since 2012. A number of these protests were approved by authorities while a few were not approved.

Authorities arrested hundreds of demonstrators, including Navalny, who plans to run against president Vladimir Putin in the 2018 election, and Guardian reporter Alec Luhn, who was covering the protests. Luhn was released without any charges immediately after it was established that he was a journalist. END_OF_DOCUMENT_TOKEN_TO_BE_REPLACED

Standing in front of the Berlin Wall in June 1987, then President Reagan famously proclaimed:

Despite the neoliberal talking points about “freedom,” “democracy,” and “peace,” the reality of life in post-Soviet Eastern Europe is not at all what was promised. Consider the abstractions employed by people like Reagan who framed the end of the Soviet Union as an event that would usher in “peace” and “prosperity.” And then consider the fact that neither peace nor prosperity has come to fruition in Eastern Europe and the former Soviet bloc. END_OF_DOCUMENT_TOKEN_TO_BE_REPLACED