The answer to this question does not lie in his physical stature or athletic passion, not even in his ability to train his thinking and devour every chapter of the homeland’s history. There was something much more powerful, something that led him to devote himself entirely to humanity, that gave him a vocation he could not renounce, of doing everything he could to transform and create, as the most sacred duty of a man. What made Fidel a natural leader, with exemplary humility and disinterest, the architect of this enduring work, was the greatest gift Martí left him and his generation: human sensibility. END_OF_DOCUMENT_TOKEN_TO_BE_REPLACED 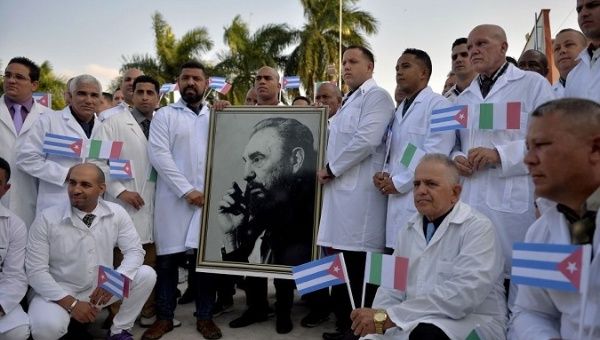 END_OF_DOCUMENT_TOKEN_TO_BE_REPLACED

A CHAMPION OF PUBLIC HEALTH

The demise of Fidel Alejandro Castro Ruz is a huge loss to the global public health. As the leader of the island nation of Cuba for nearly half-a-century, Fidel not only led exemplary initiatives to ensure healthcare for all within the country, but also ensured that Cuban doctors were the first to reach out to people in developing countries during natural disasters. Under Fidel, Cuban medical scientists also developed cutting-edge measures to combat diseases, ranging from meningitis to cancers. END_OF_DOCUMENT_TOKEN_TO_BE_REPLACED

Only a careful curatorial eye allowed press photographer Jorge Valiente and journalist Sahily Tabares to create the book Fidel es un país, an iconography of the Cuban Revolution’s leader that captures him just as he was.

Colleagues and life companions, the authors made a selection from among more than a thousand shots Valiente has of the Comandante en Jefe, photos taken in the exercise of his profession, first for the newspaper Revolución,and later Granma. His existence just as it was lived.

END_OF_DOCUMENT_TOKEN_TO_BE_REPLACED

November 25 marks the second anniversary of the death of Comandante en Jefe Fidel Castro Ruz and celebrations of his life have begun, with a focus on reaffirming Cuba’s commitment to continuing his legacy

November 25 marks the second anniversary of the death of Comandante en Jefe Fidel Castro Ruz and celebrations of his life have begun, with a focus on reaffirming Cuba’s commitment to continuing his legacy

Fidel is Fidel; we all know it very well. Fidel is irreplaceable and the people shall continue his work when he is no longer physically with us; his ideas will always be with us, the same ideas that have made it possible to build the beacon of dignity and justice our country represents.

END_OF_DOCUMENT_TOKEN_TO_BE_REPLACED

This Saturday Fidel returned to the university where he became a revolutionary, to stand alongside the youth in whom he always believed

“He who puts down roots in his land… is loved… To him our hearts are open, so he may enter…” José Martí