Even before Russia invaded Ukraine, Western media have depicted Russian President Vladimir Putin as an irrational—perhaps mentally ill—leader who cannot be reasoned or bargained with. Such portrayals have only intensified as the Ukraine crisis came to dominate the news agenda.

The implications underlying these media debates and speculations about Putin’s psyche are immense. If one believes that Putin is a “madman,” the implication is that meaningful diplomatic negotiations with Russia are impossible, pushing military options to the forefront as the means of resolving the Ukraine situation.

If Putin is not a rational actor, the implication is that no kind of diplomacy could have prevented the Russian invasion, and therefore no other country besides Russia shares blame for ongoing violence. (See FAIR.org, 3/4/22.) Yet another implication is that if Putin’s defects made Russia’s invasion unavoidable, then regime change may be necessary to resolve the conflict.

Western media have for years been debating whether Putin is insane (Extra!, 5/14; FAIR.org, 2/12/15) or merely pretending to be—speculation that has only intensified in recent weeks: 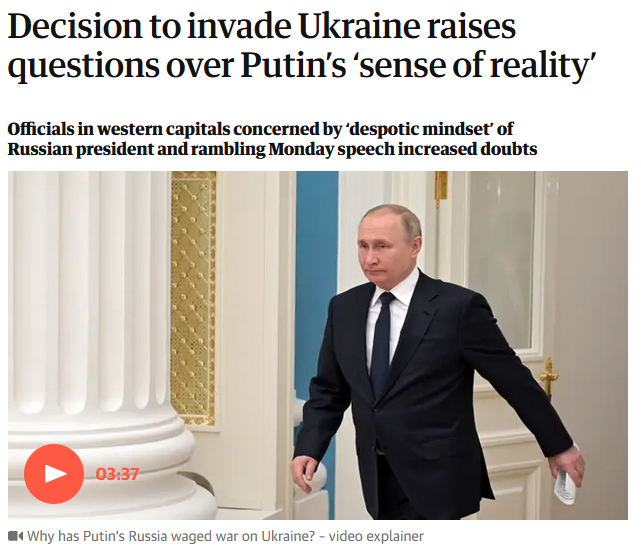 They worry about a 69-year-old man whose tendency towards insularity has been amplified by his precautions against Covid, leaving him surrounded by an ever-shrinking coterie of fearful obedient courtiers. He appears increasingly uncoupled from the contemporary world, preferring to burrow deep into history and a personal quest for greatness.

Even when other media analysts argued that Putin’s alleged mental illness was merely a ruse to wrest concessions from the west, this was not presented as a rationale for negotiating with him, but rather as a reason to reject de-escalation and diplomacy. Forbes (3/1/22) claimed that although Putin is “obviously capable of massive errors in judgment,” that doesn’t necessarily mean that “he’s lost his marbles,” as Putin has only “gotten this far by being calculating and cunning.” Forbes‘ Michael Krepon went on to explain that the “mad man theory only works when the threatener is convincingly mad,” and that Western countries should proceed to call Putin’s bluff: “Help Ukrainians with military, economic and humanitarian assistance,” he urged, rather than pursuing diplomatic negotiations with Russia. 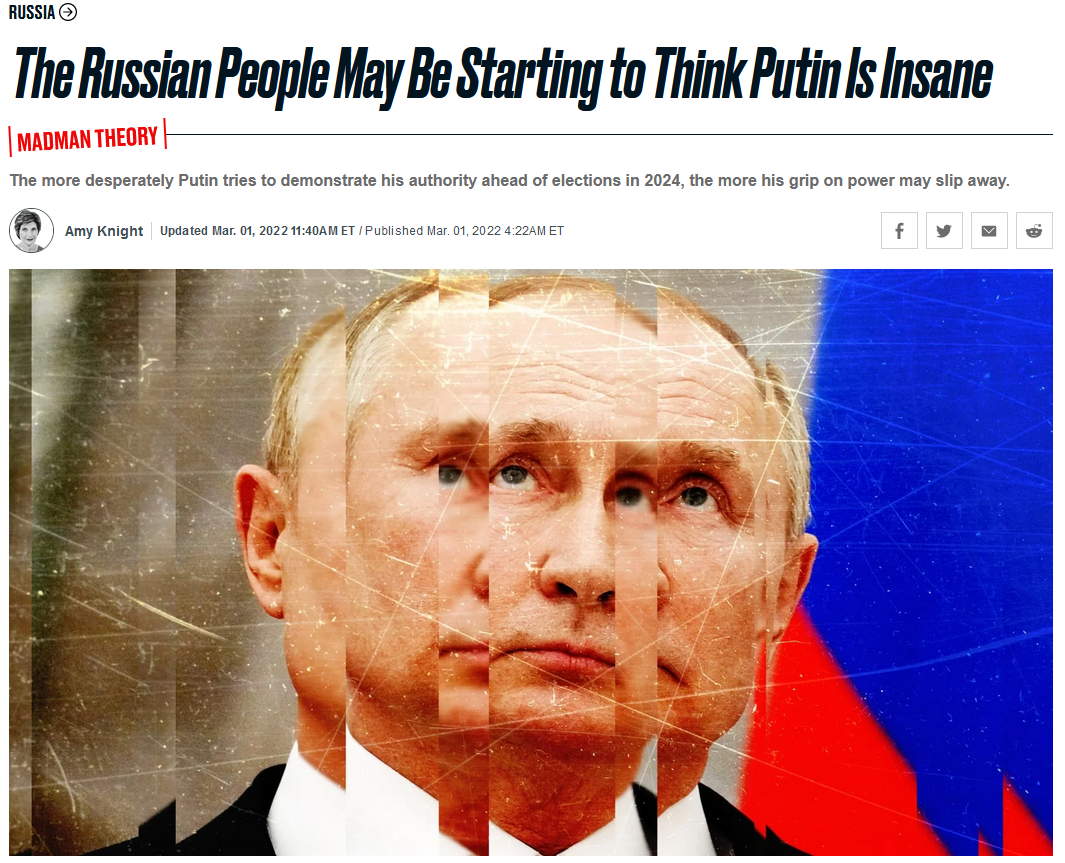 Daily Beast (3/1/22): There is a lot of talk in the West about Russian President Vladimir Putin being mentally unhinged.”

In the Daily Beast (3/1/22), Amy Knight, a historian of Russia and the USSR, displayed a remarkable ability to read Putin’s mind, discerning the real motivations of someone she describes as possibly “detached from reality.” She attributed Putin’s decision to invade to a feeling of insecurity over his “hold on power,” because he “knows that he was not democratically elected to the presidency in 2018, or even in 2012, because serious contenders were barred from participating.”

This alleged feeling of “insecurity” has apparently driven Putin to hate “democratic states on his country’s border,” because he doesn’t “want his people to get ideas.” Knight claimed that all Putin’s rhetoric about “the West destroying Russian values and NATO threatening Russia with nuclear weapons” merely “camouflages his intense fear of democratic aspirations in his own country.” Strangely, although Knight speculates about Putin’s possible insanity, she also provides largely rational explanations for Putin’s actions, because if a leader is afraid they weren’t legitimately elected, they might opt to launch a war to generate a “rally ’round the flag” effect, as George W. Bush did. This undermines the suggestion that Putin is an irrational actor.

Knight suggested that Putin was more dangerous than Soviet leaders like Nikita Khrushchev or Joseph Stalin, or even Germany’s Adolf Hitler. Khrushchev, she wrote, was someone who wasn’t “consumed by the historical grudges and the need to show off his masculine credentials,” and “had to consider the views of fellow Politburo members” instead of making key decisions on his own, like Putin allegedly does.

One of Khrushchev’s decisions, jointly made or otherwise, was launching the 1956 Soviet invasion of Hungary, which kept that country in the Warsaw Pact at the cost of several thousand lives. That invasion does not seem obviously different in kind from Putin’s attempt to keep Ukraine from leaving what Russia considers to be its sphere of influence.

‘Reason is not going to work’

Other Western media headlines offered quite specific, though varying, evaluations of Putin’s mental state from a distance. (This sometimes also happens with domestic figures like former President Donald Trump.) A few instances:

These diagnoses from afar have been going on for a long time. In 2014, psychotherapist Joseph Burgo (Atlantic, 4/15/14) argued that “Putin may or may not be a clinical narcissist,” because it’s “impossible actually to diagnose the man at a distance.” Nevertheless, Burgo encouraged the US foreign policy establishment to assume he is a narcissist, in order to help “mitigate risk in the ways it deals with him.” 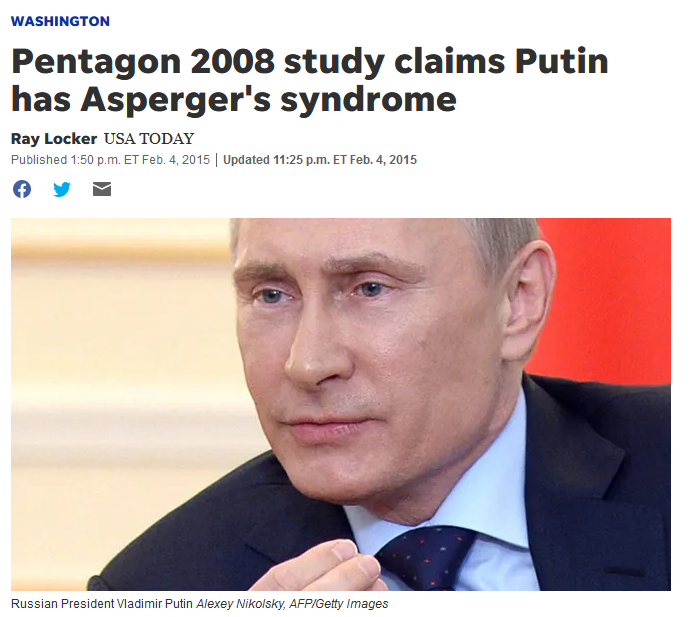 In 2015, USA Today (2/4/15) reported on a 2008 study from a Pentagon think tank that theorized that Putin has Asperger’s syndrome, an “autistic disorder which affects all of his decisions.” It speculated that Putin’s “neurological development was significantly interrupted in infancy,” although the report acknowledged that it couldn’t prove the theory because they weren’t able to conduct a brain scan on the Russian president.

The 2008 study was based on “movement pattern analysis,” essentially watching videos of Putin’s body movements to gain clues on how he makes decisions and reacts to events. Further reporting on the study (Guardian, 2/5/15) noted that the authors don’t claim to make a diagnosis, because that would be impossible based on so little evidence. The work was primarily inspired by Brenda Connors, a former State Department official, professional dancer and “movement patterns analysis” expert at the US Naval War College.

Psychologist Pete Etchells (Guardian, 2/7/15) mocked the Pentagon study because the methodology of using movement pattern analysis to diagnose Asperger’s syndrome is “so generic as to be meaningless,” and that trying to “figure out someone’s state of mind based solely on how they move is a hugely subjective endeavor, easily prone to misinterpretation.” He also noted that it is not possible to diagnose whether people are on the autism spectrum with brain scans.

Some writers (e.g., Guardian, 2/22/17; Daily Beast, 8/9/21) have criticized what is known as “Putinology”—the reduction of Russian politics to the analysis of incomplete, and occasionally false, information about Putin and his motives. It is a common Western media tactic to equate and reduce an entire country to its singular (and often caricatured) head of state, usually presented as a cartoon villain with sadistic and irrational motives, to justify further Western hostility towards those countries (Passage, 12/14/21; Extra!, 11–12/90, 4/91, 7–8/99).

Some contemporary attempts to explain Russia’s invasion of Ukraine by psychoanalyzing Putin make sweeping judgments about his mental state, even while insisting that a professional diagnosis would be necessary to confirm their speculative perceptions of him. 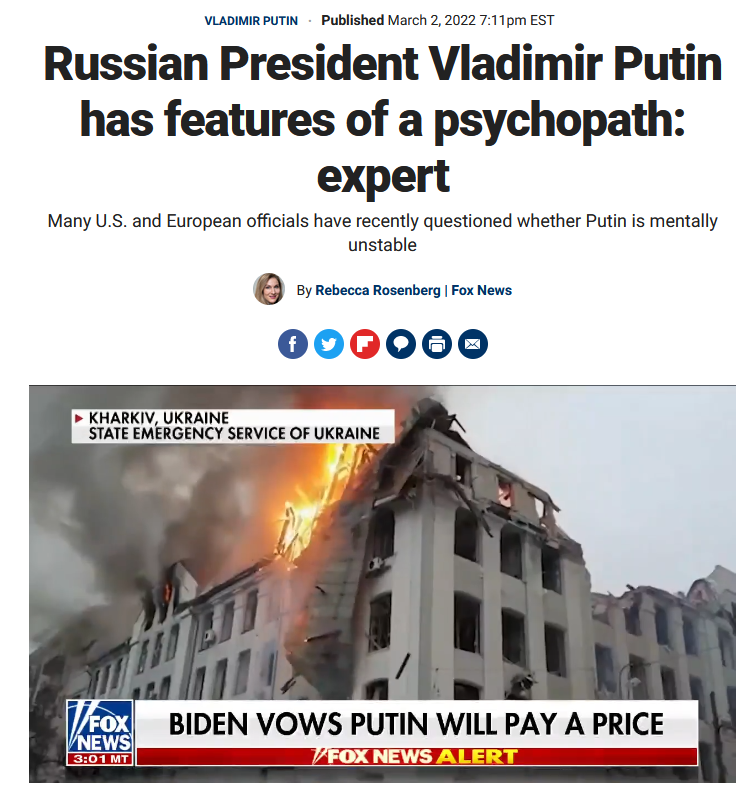 Fox News‘ expert (3/2/22) is not violating ethical rules because when he refers to Putin as a “psychopath,” he’s not “diagnos[ing] a public figure who he has not personally examined,” but rather “assess[ing] Putin’s actions in the framework of a personality type.”

Fox News (3/2/22; reposted by Yahoo!, 3/2/22) cited forensic psychiatrist Dr. Ziv Cohen, who averred it would be a “violation of his profession’s ethical rules to diagnose a public figure he has not personally examined.” He went on to seemingly violate those ethics by opining that diplomatic negotiations with a “psychopath” like Putin were pointless:

“He’s not crazy,” Cohen said. “He’s charming, calculated and manipulative. With psychopaths, you cannot develop a common understanding. You cannot have agreements with them. They really only respond to superior power, to a credible threat of force.”

Fox actually cited one other source, Rebekah Koffler, a former Defense Intelligence Agency officer for Russia, who noted that “other psychiatrists have evaluated Putin’s mental stability and concluded he is a typical authoritarian with no anomalies,” and that Putin’s actions “reflect Russian cultural norms and standards of behavior.” Koffler argued that the comparisons being made between Putin and figures like Stalin and Hitler are exaggerated, yet Fox only included Dr. Cohen’s pathologized opinion in its headline: “Russian President Vladimir Putin has Features of a Psychopath: Expert.”

Psychologist Emma Kenny claimed for the British tabloid Sun (2/26/22) that although she’s “unable to bring him to the consulting room for assessment,” she nevertheless feels comfortable making declarations like:

Putin continues to manufacture an “alpha male” persona. He is incredibly egocentric, and has a confidence and arrogance he does not try to hide…. Emotions such as guilt and shame do not seem to ­register with him—another key example of a potentially ­psychopathic nature.

As of this writing, Secretary of State Antony Blinken hasn’t attempted any conversations with his counterpart, Russian Foreign Minister Sergei Lavrov, while Russian military commanders are declining calls from the Pentagon, likely due to the US sharing military intelligence with the Ukrainian government. This silence on both the diplomatic and military fronts risks further escalation instead of a quick negotiated end to the war.

The Western media caricature of Putin as a psychopathic leader acting on irrational and idiosyncratic beliefs is a  convenient propaganda narrative that excuses US officials from taking diplomacy seriously—at the expense of Ukrainian lives and nuclear brinkmanship (Antiwar.com, 3/10/22). Recent negotiations between Russia and Ukraine in Istanbul were hailed by both parties as constructive, with Russia vowing to reduce military activity around Kyiv and northern Ukraine as a result (NPR, 3/29/22). It’s important not to let US officials subvert peace negotiations between the two parties on the evidence-free grounds that negotiations with Russia are pointless.

FAIR’s work is sustained by our generous contributors, who allow us to remain independent. Donate today to be a part of this important mission.