In a circumstance where one side controls institutions like the media, police and other organs of the state, the success of a movement rests on developing creative means of breaking through the government’s control over institutions.

Why do some protest movements succeed while others fail?

There are three major elements that determine the success of a protest. The foremost amongst these is the ability of a movement to establish narrative dominance and get its message across. Next is understanding who the opposing forces are and developing the resources to counter them. The tactics of protest against a corporate entity look very different from those required to mount a successful protest against the government, an entity with unlimited resources at its disposal. And lastly, any movement must grow its support base beyond its core supporters if it is to succeed.

In theory, the validity of the grievance plays a major role in determining if a movement can gain traction. But in a circumstance where one side controls institutions like the media, police and other organs of the state, the success of a movement rests on developing creative means of breaking through the government’s control over institutions – or sidestepping it.

The farmers’ protest is an apt illustration of how this can be done.

As the movement started, farmers relied on decentralised organisations with their own leadership structures to coalesce together and create the critical mass required. This decentralised leadership was the first essential lesson that the farmers’ protest provides. It was because of this nature of the leadership that there was no one entity for the government to target.

The other essential step even before mobilisation and agitation was education. This served as a defensive measure to ensure that the core supporters understood the issues and oppositional tactics so that the movement couldn’t be derailed.

This is why even when Rakesh Tikait became the face of the movement, maligning him or creating doubt about his intentions didn’t work well. At multiple times during the protest when the media presented certain decisions as being unilaterally taken by Tikait, farmers on the ground knew the consensus mandate of all the farmers’ unions and the leadership structure of the movement. This ensured that they disregarded the reporting and continued to support the decisions.

Once a decentralised leadership and informed base of core supporters are established, a movement needs to create a spectacle that can take its message beyond its support base.

Derived from army manuals of a long-gone era, where armies lay siege to capitals by simply camping out in large numbers, the farmers’ movement decided to camp on the borders of Delhi.

They announced intermittent rallies and bandhs to regain media coverage when it dissipated, but the prime reason for the movement’s success was that it lasted continuously for over a year. Without this continuous engagement, their demands would be ignored by the ruling dispensation and forgotten by the nation at large. It is only by ensuring their continued presence at the borders of the nation’s capital that they could keep their demands and plight alive in the minds of the nation’s public.

A farmer cooking at the langar at Singhu border. Photo: Himadri Ghosh

While it is relatively easier to organise day-long marches that have a large number of people participating, sustaining a large protest movement over months during a cold winter and hot summer outside the nation’s capital is no small feat. Solely from a logistical standpoint, if such a protest is to be sustained, there has to be tremendous planning and organisational ability in place.

The hundreds of thousands of protesters who have come from outside the area, sometimes travelling hundreds of kilometres, require winter clothing, places to sleep, food, water, electricity, laundry, medical services, restrooms, libraries and regular programmes to keep them engaged and motivated.

Also read: How Farmers Set Aside Differences to Emerge As a Major Political Force to Reckon With

Such protests also require communication channels to spread messages within the camps, diplomatic contacts to negotiate with the government, media management, and ultimately, an influx of money and other resources to sustain all of the above.

The easiest way for a movement to die is when the leadership fails to sustain it logistically and monetarily. To ensure this, donations from farmers and strong supply lines for required necessities were established.

When these protest camps initially emerged around Delhi, the nation’s capital, the government tried to defuse the situation by engaging in talks with the farmer unions. In these meetings, the farmer representatives refused to eat the food provided by the government, and instead, brought their own food. They also had an unequivocal demand that couldn’t be negotiated: a total repeal of the farm laws. While media commentators claimed this was just obstinacy and bad negotiating tactics, in terms of unseating an existing narrative that the farm laws were good for farmers, this was the only possible strategy.

From the point of view of the farmers, any engagement with the narrative that said parts of the new farm laws could be good for farmers would end up breaking their protest into multiple factions. If such a thing were to happen, then each of these factions could be used by the government to further its own narrative, and that just couldn’t be allowed. The representatives agreed to negotiate with the government, while they continued to spread their message that the laws were detrimental to the farmers and hence had to be repealed completely.

The question then arises: if the protestors already knew this, then why were they engaging with the government at all? The answer— they wanted to appear reasonable and tilt public opinion in their favour, thus keeping a lead in the war for public opinion and eventually forcing the government to accept their demand of total repeal.

To sidestep this dominance of mainstream media they established multiple YouTube channels and even their own newspaper, Trolley Times. They clearly understood they were fighting a narrative war and had to control their messaging. Through their use of social media and viral messaging, including obtaining the support of foreign celebrities and prominent Indian voices, they also showcased their understanding of the fact that they needed to build a significant audience for themselves if they wanted to succeed, and they had to continually repeat their unmovable demand.

Also read: Farmers Win on Many Fronts, Media Fails on All

This, in part, was also the reason why the farmer groups refused to litigate the farm laws in the Supreme Court. As history had shown, the Supreme Court would either favour the government and uphold the laws in their entirety, or in the best-case scenario for farmers, the court would come up with a middle solution as a compromise that would still favour the government. If they engaged in the process, public opinion could be turned against them easily as they would be blamed for disregarding the courts.

Their assessment of what the Supreme Court would do later turned out to be accurate. When the court did intervene, it offered to stay the farm laws and proposed a committee to examine the issue. Such a committee would inevitably aim to reach a situation of compromise that still maintained all elements of the laws that the government wanted while also showcasing that a fair compromise had been reached.

Victory in a movement like this is a game of waiting till the other side commits a blunder so great that they are forced to fold. Neither the farmers nor the government has tools like brute force, monetary inducements or other tactics available at its disposal against an opposing force so great.

The most devastating blow for the protests came from the January 26 incidents where a section of protestors hoisted their flags in the Red Fort and violence ensued in the area. The damage was contained when farmer leader Rakesh Tikait made a stirring speech that ensured that the movement would not dissipate. He was quick to distance the farmers from the violence, terming the incident a conspiracy to tarnish the movement.

While many tried their best to delegitimise the movement by branding it as a Khalistan supported protest or the work of foreign forces, these attacks never stuck within the protestors because local elders in the community continued to reiterate the movement’s reasons within their direct communities in their oral interactions over evening teas and hukkahs. This shows the strength that direct community outreach has over WhatsApp and news media, and is a lesson for all future movements. 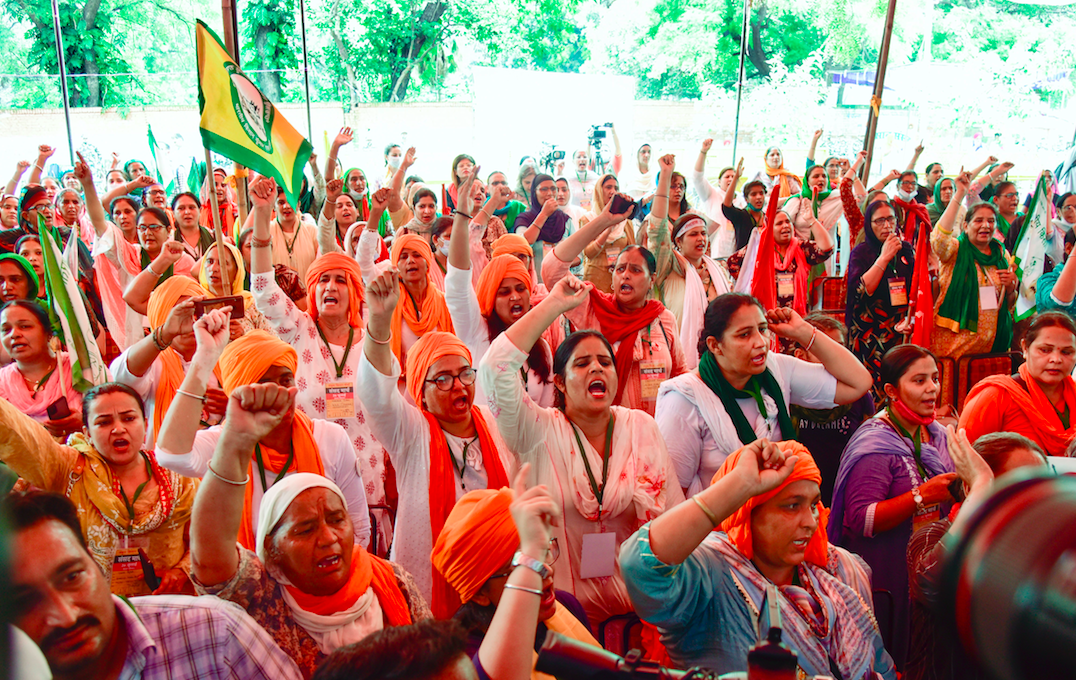 Women farmers and their suppoters during Kisan Sansad against the Centre’s farm laws at Jantar Mantar in New Delhi, Monday, July 26, 2021. Photo: PTI

While there were multiple times that the government tried to break up the protest using state force, it was becoming clear that these tactics weren’t working. The fact that leaders of the protest were farmers who didn’t have income streams that could make them a target of coercion through the use of investigative bodies like Income Tax and ED left limited options with the government.

It lost the final battle on narrative when farmers were run over by a cavalcade of cars, allegedly led by the son of the Union minister of state for home affairs and the government refused to act for days. At that point, dominance of the farmer’s movement had ensured that the only way for BJP to regain votes in western UP and even be able campaign in Punjab was to give in to the farmer’s demands and repeal the farm laws in their totality. The reason the farmers won was that they sustained the movement and kept public support alive while the government continued to weaken its hands by using repressive measures against them, thereby losing public support continually. The fact that elections are on the horizon in states impacted by the protests was what finally provided the impetus for the government to act.

Shivam Shankar Singh and Anand Venkatanarayanan are authors of The Art of Conjuring Alternate Realities (HarperCollins, 2021), from which the arguments in this piece have been adapted.