The farmers quite nicely did understand the fake nature of the claims sought to be made for the laws, which is why their mobilisation remained unbreached by the various shenanigans resorted to by the establishment.

It can be said with confidence that the year-long peaceful satyagraha by India’s farmers has made a watershed contribution to returning democracy to the beleaguered republic.

This historic movement has been marked by some exemplary features:

Foremost, the protesting farmers have evinced, to the last man and woman, in fact even child, a comprehensive and sophisticated grasp of the ideological import of the three farm laws (now happily set to be repealed).

No disingenuous diversion or fake interpretation managed to shake down that clarity.

It would have been noted that the announcement about the intention to repeal the laws has not admitted to any second thoughts on the propriety or alleged merit of the impugned laws, only a regret that the establishment has not succeeded in communicating its case to the agitating farmers.

The fact of course is that the farmers quite nicely did understand the fake nature of the claims sought to be made for the laws; which is why their mobilisation remained unbreached by the various shenanigans resorted to by the establishment.

As was open to public gaze and knowledge, those shenanigans included the whole caboodle of Chanakya-prescribed politic recourses, comprising saam, dhaam, dhand, bhed (co-option, bargain, strong-arm tactics, resort to dividing the protesters), With a large and unrelenting modicum of calumny and abuse: they were dubbed Khalistanis, andolanjeevis, mawalis, what- have-you.

It is a rare tribute to the leadership of so large and prolonged a movement that they were able to communicate the sum and substance of these laws to the mass of farmers at every stage in the face of disinformation and propaganda unleashed both by ruling party organs and compliant media channels.

The numero uno of the movement, Rakesh Tikait, although from Uttar Pradesh, was brilliantly successful in holding all sections of agitating farmers in an informed unity across regions, castes, religions and dialects.

It must be admitted that Rakesh Tikait at all stages has proved more than a match for the interrogating media, however they sought to either demoralise or divert the movement into compromise or submission. 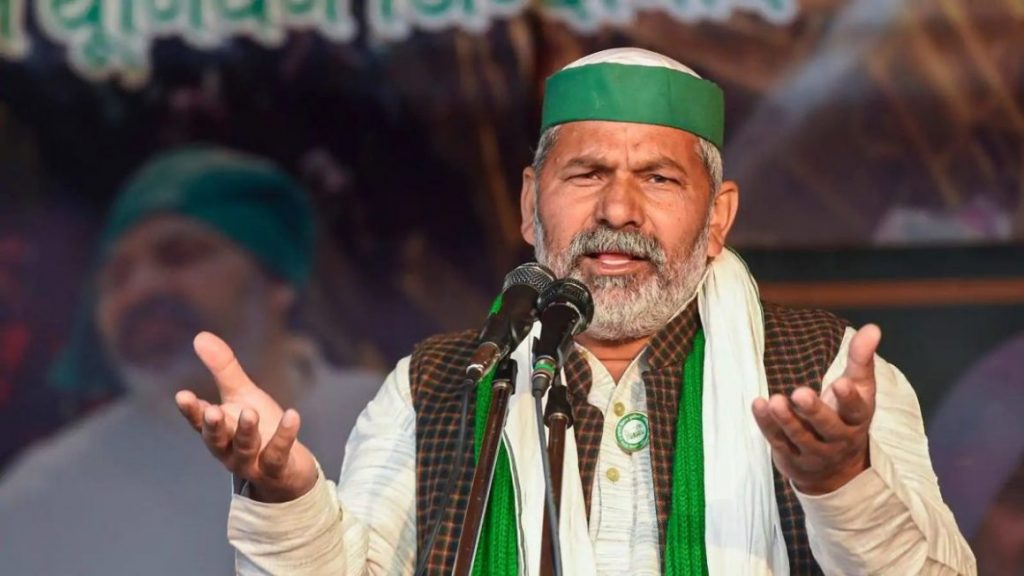 It is no joke to have been able to organise a movement so large and so spread out both in space and time without one single day’s goof-up; the creativity with which programmes of action were conceived, serialised and accentuated will remain an example to follow.

And, and most stunningly, the farmers’ movement has never for a day lost their faith in the efficacy of united, democratic, peaceful struggle wedded to lawful and constitutional values.

Also Read: From the Pagari Sambhal Jatta to Now, How India’s Farmers’ Movements Have Evolved

It will be a grave mistake to think that the Modi government has seen the conceptual error of its policy.

As stated above, Modi has only confessed to a failure of communication, not of policy.

It could not have made that larger admission, given the fact that the ideological bent of this government remains firmly rooted in right-wing corporatisation of the nation’s resources, among them, most of all, land and assets thereof.

No wonder that some choice voices who have routinely spoken for those interests among the “economic” community have felt their high hopes dashed, and so said on media channels.

All preparation for the commercial appropriation of farming assets had been in the zestful making of captains of wealth.

Had elections not been imminent to the assemblies of Punjab and Uttar Pradesh, but of some more far-away zone, the repeal announcement may not have come.

As this writer had suggested in an earlier column, the ruling party may be faced with a double jeopardy – of having had to repeal the farm laws and still not win back the votes it is set to lose.

This for the reason that the distrust of the farming community with the Modi government extends well beyond the three laws to the memory of proclamations that have never fructified to the day.

It is a tribute to organised opposition parties that they consistently refrained from muscling into the farmers’ movement.

The fact that they saw the democratic and ideological potential of the movement, and recognised its autonomous strength speaks to their astuteness in the matter.

It has been a heartening new phenomenon to see them orchestrate their support in intelligently distant ways, sprinkled with appearances at crucial stages when excesses and tragedies of a personal and human nature came to the fore.

This new maturity marked by a patient and sophisticated equation with people’s leadership of mass movements bodes well for the political culture of India.

That some of them may reap electoral benefits from the way they lent support to the farmers is indeed both to be expected and welcomed.

Effects of the repeal announcement

It is already clear that the ruling BJP will go to town to laud the great “statesmanship” displayed by the prime minister, even as, in the heart of their heart they know they have been defeated.

They will leave no stone unturned to press the repeal announcement to turn around what they know to have been a calamity for them in electoral ways.

Which is why the farmers must weigh this announcement with great percipience.

As stated, the ruling ideology has not given up on their policy purpose to expropriate farm assets to benefit the private, corporate sector.

There is reason to believe that the farmers’ leadership is only too well aware of this over-arching reality.

News is that the united farmers’ organisation is writing to the prime minister on a set of outstanding demands that require to be met. These include:

Then of course there are grave concerns about the non-payment of dues against sugarcane deliveries, the non-availability of fertilisers, the exorbitant cost of diesel and other farm inputs – all contributing to unsustainable rural distress.

It remains to be seen how and when these crucial farm requirements will either be conceded or cannily deflected.

There seems, therefore, small chance that the prime minister’s affectively rendered announcement will cause so great a change of heart as to turn the continuance of the farm movement away from its current mobilisation.

Indeed, they have already made it known that all slated farm actions will carry on as proposed, beginning with a mahapanchayat, significantly, in the heart of Oudh at Lucknow as we write.

It is also not on the horizon that the farmers may yet again, as in 2013, succumb to sectarian appeals that will no doubt be used to cause a communal breach among them.

Needless to say, that the memorable and ongoing farmers’ movement has made the upcoming elections events of great historic interest.

Furthermore, we may expect the climb-down of the government to fuel demands for the repeal of other laws now on the books; already, voices can be heard from Kashmir recommending that the honourable prime minister should now demonstrate similar statesmanship with regard to the disastrous reading down of Article 370 – a measure that would go a long way in retrieving the abysmal situation that now prevails in that all-important state.

Who knows, a mass movement of a united kind might fructify in Jammu, Kashmir and Ladakh for the said purpose since disillusionment with the aftermath of the revocation has come to affect all three regions.

Similarly, demand has already gone up for the repeal of the contentious Citizenship Amendment Act which had also seen widespread mobilisation of citizens against it.

Never forget that politics is the art of the possible, a reality that the farmer’s movement has proved with emphatic assertion.