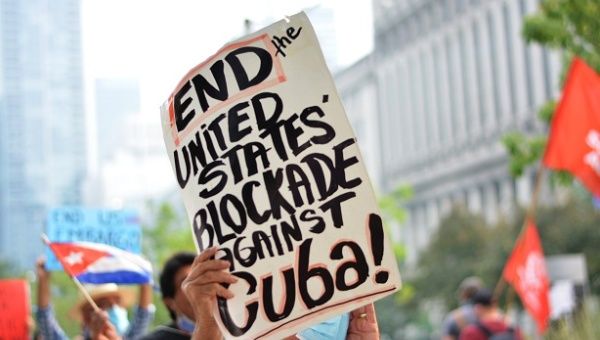 On Friday, over 400 artists, politicians, intellectuals, and international activists will send a letter to President Joe Biden demanding that he end the blockade against Cuba and improve bilateral relations.

“We find it unconscionable to block remittances and Cuba’s use of global financial institutions, especially during the COVID-19 pandemic when the access to dollars is even more necessary for the importation of food and medicines”, underlines the text, which was be published in the New York Times.

The open letter supporting the Cuban people was signed by personalities such as Brazil’s former President Lula da Silva, theologian Frei Betto, Danny Glover, and Susan Sarandon. They stressed that the ban on remittances and the end of direct commercial flights between the U.S. and Cuba are also impediments to the wellbeing of the vast majority of Cuban families.

“There is no reason to maintain the Cold War politics that required the U.S. to treat Cuba as an existential enemy rather than a neighbor,” the activists stated, adding that if Biden stands with the Cuban people, he should immediately sign an executive order to annul 243 sanctions set by President Donald Trump administration (2017-2021).

Due to the effects of the COVID-19 pandemic on tourist activities, Cuba has stopped receiving billions of dollars which could be used to provide economic relief to the population and import food and medicine.

Taking advantage of the epidemiological emergency, Trump reversed the policy of normalization of bilateral relations established by Barack Obama and tightened the embargo to force a change in the political regime in Cuba.

In April 2020, seven United Nations Special Rapporteurs also wrote a letter to the U.S. government to reject the economic sanctions on Cuba. On June 23, 184 countries voted in favor of lifting the blockade. Despite the international outrage, the U.S. government persists in its hostile attitude towards Cuba.