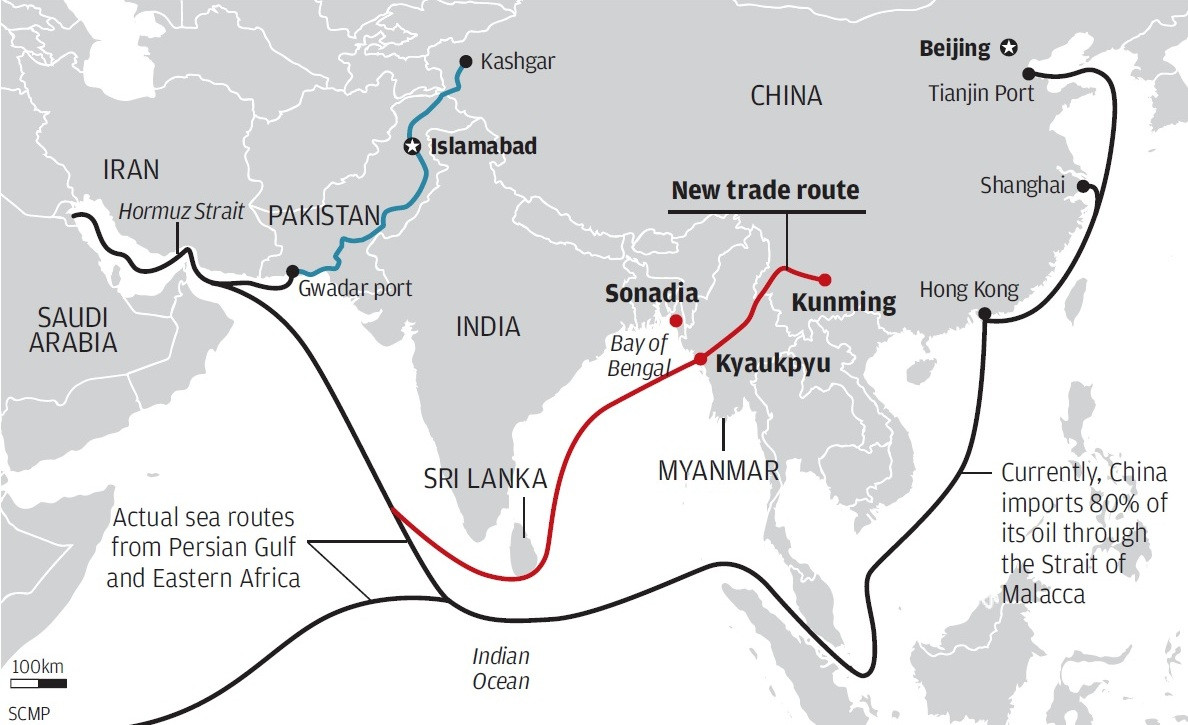 Pipelines through Pakistan and Myanmar provide for alternative routes. 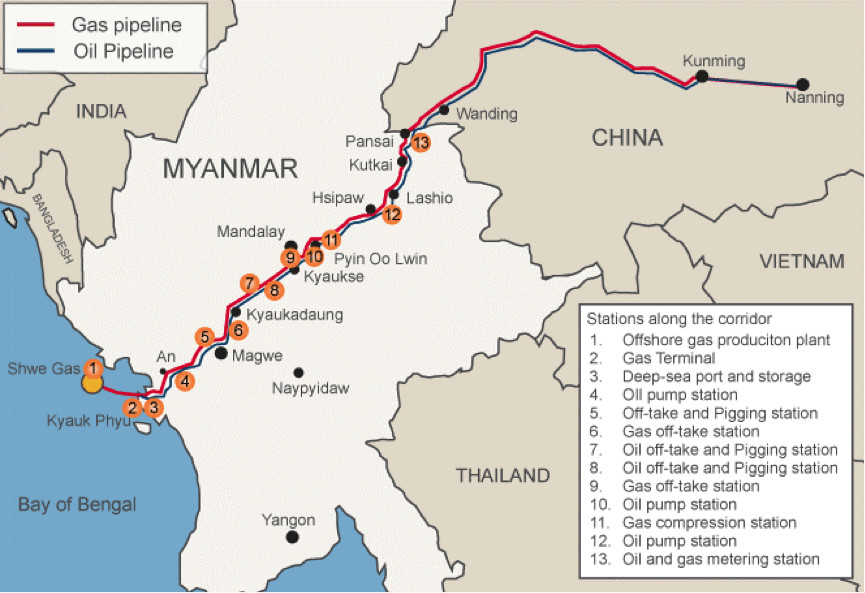 The pipe, road and rail lines through Myanmar are not only in China’s best interest but also a great chance for Myanmar to further develop. They are in its national interest.

The U.S. and its allies are hostile to China. Threatening to cut its oil supplies is probably the most powerful tool in their box. Any alternative supply routes for China make this tool less powerful. The idea then is to prevent the possible use of these routes.

Since its foundation after World War II Myanmar was ruled, sometimes more sometimes less brutally, by its anti-colonial military.

The first U.S. plan to gain control over Myanmar was to install a ‘democratic government’ (sic) that would do its bidding. In 2010, under pressure of U.S. instigated color revolutions, the military conceded to allow a civilian government but kept much of its constitutional and economic power. In 2016 the U.S. preferred candidate Suu Kyi, the daughter of the former military leader and Father of the Nation Aung San, was installed at the head of a new government. 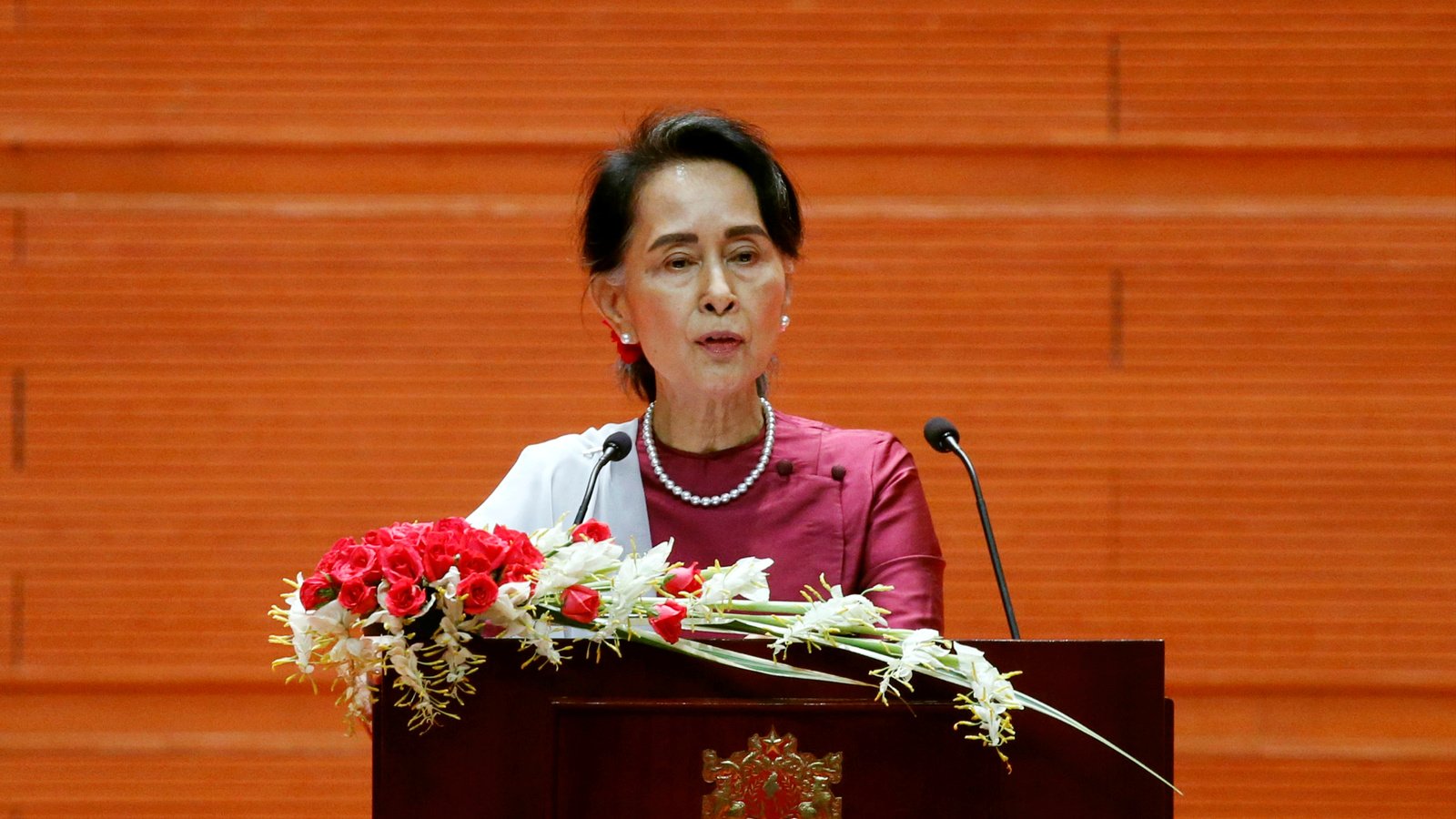 The cynical empire has been leaning on identity politics imagery for decades. In case after case of regime change with the proper cosmetics, it chooses as its champions prominent women of the local bourgeoisie. In the Philippines it was Corazon Aquino; in Nicaragua Victoria Chamorro. In Myanmar Aung San Suu Kyi. And so it goes.

But Aung San Suu Kyi turned out to be a nationalist and soon failed in the eyes of the U.S. regime changers. She was as friendly with China as the military and was equally aggressive against Myanmar’s many ethnic minorities. Her eventual fall out with the military was not over those issues. The military owns key industries in Myanmar and Aung San Suu Kyi, and the ‘civil society’ people behind her, wanted a place at that trough.

Elections in 2020, which excluded voting in many ethnic regions, brought overwhelming support for Aung San Suu Kyi. This alarmed the military as it feared that its main source of income would soon be endangered. On February 1 it launched a coup and put Aung San Suu Kyi under house arrest.

This brought a new chance for the U.S. to intervene. It immediately re-activated the 77 ‘civil society’ organizations in Myanmar which it is financing through the CIA offshoot National Endowment for Democracy. Protests were launched together with attacks on Chinese companies and property.

As I described it at at that time:

So this is evidently a color revolution effort against the military.

What is irritating with it is the speed with which it took off. Color revs usually require years of group building and leadership preparation. They need monetary and communication support as well as political directions from ‘advisors’ in ‘western’ embassies. Here it took only ten days to launch it.

But that all is a long time ago and after Suu Kyi had come to power there was no necessity to keep those efforts alive.

Then again – under Myanmar’s 2008 constitution the military was still effectively in charge. Together with Suu Kyi’s large win in the latest election there may have been an long planned ‘western’ attempt underway to finally unseat the military from its privileged position and to pull the country out of China’s orbit.

But the chance for that eventually to happen is practically zero. Some 70% of Myanmar’s population lives in rural areas. The protests occur only in the three big cities Yangon, Mandalay and Naypyitaw and are relatively small. The military is ruthless and will have no trouble to take the protesters down.

Whoever launched this nonsense should be held responsible for endangering those people.

As I predicted the protests, and the strikes the color revolution apparatus induced in the form of a Civil Disobedience Movement (CDM), have since petered out:

Although Thiha didn’t want to abandon CDM, he also didn’t want to lose his job amid a tanking economy. After weighing it up for a few days, he decided to get back to work.

“I have a loan from a microfinance company that I need to repay and a family to support – a wife and a five-year-old daughter,” he said. “It wouldn’t be easy for me to get another job, particularly as I’d have to change my career.”

There were just a handful of staff present when he turned up at his branch on April 20, but the number grew each day; by the April 29 deadline, about 80 percent had returned, although they were not yet wearing their KBZ uniforms.

It’s a scene being repeated around the country, as tens of thousands of striking bank workers slowly get back to work.

This U.S. induced color revolution attempt against the military coup has failed.

Now it is time for plan B – the Syria model: “If we can’t have it we will destroy it!”

A major Burmese ethnic rebel group has claimed to have shot down a helicopter belonging to the country’s military. The incident comes amid continuing protests against the recent coup that ousted Myanmar’s civilian government.

The Kachin Independence Army (KIA) said the helicopter had been shot down on Monday in Myanmar’s northernmost province of Kachin. The aircraft is said to have been destroyed after Myanmar’s military launched airstrikes against the rebels.
…
Footage circulating online shows the helicopter – likely a Mi-17 transport-assault aircraft – sustaining an apparent hit from a portable anti-aircraft missile launcher.

The Kachin (red) in the north east and the Karen (orange) in the south east have a long history of fighting against the Burman (dark violet) majority and for autonomy within Myanmar. During World War II Burma’s National Army under Aung San fought on the side of Japan to kick the colonial power Britain out of Burma. Britain, which at that time also controlled India, used the Kachin and Karen to wage a guerilla war against Japan’s Burmese proxy forces. 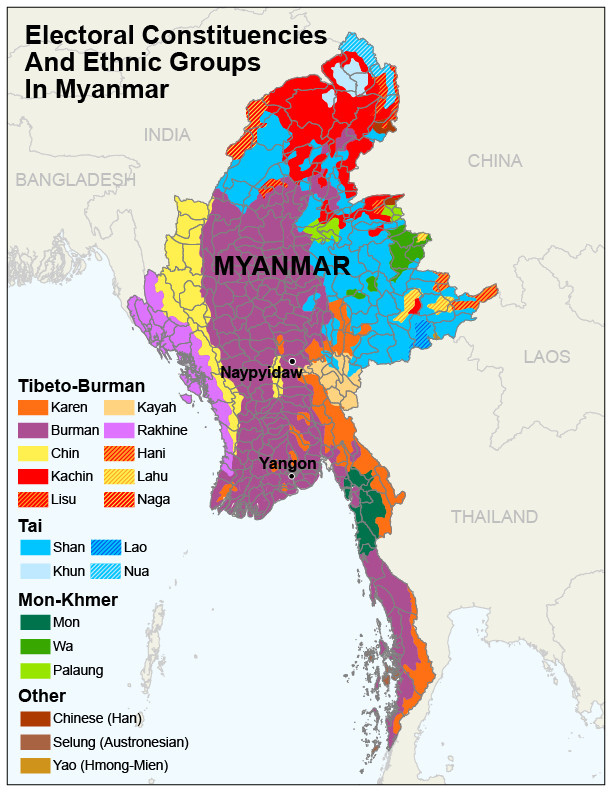 Under the great Quad project to fight China those old ties have now been reactivated. Former Indian ambassador M.K. Bhadrakumar explains the project:

[T]he operative part hidden from view concentrated on the creation of a “government-in-exile” (a National Unity Government.) Alongside, Britain’s MI6 sought to bring together Myanmar’s main ethnic separatist guerrilla groups, encouraging them to take advantage of the chaos to open a second front.

Indeed, some degree of proximity has since developed between the Burman protesters in Yangon and Mandalay on one side and the non-Burman minority ethnic groups on the other side. Despite a history of mutual antipathy, they have a convergence today to bleed the military. It is an improbable coalition of Buddhists and Christians, but as an American analyst cautiously assesses, it is doable:
…
At any rate, by mid-April, the first major armed attack on the military took place by the Karen National Union, Myanmar’s oldest rebel group (which was originally created by the British colonial power as its proxy.) Such attacks have since become commonplace.

Today, the so-called National Unity Government announced its intention to establish a Federal Union Army — a military force of defectors from the security forces, rebel ethnic groups and volunteers. This would be a watershed transforming the anti-military agitation to an armed confrontation with the military. Myanmar is entering the crucial stage where Syria stood in 2011.

The Man Portable Air Defense (Manpad) missile used by the Kachin against a Myanmar army helicopter did not come out of nowhere.

It must have come from the MI6 or CIA through Myanmar’s wide open borders with Quad member India. (Fielding provisions for the Karen near the Thai border are likely more complicate as the Thai military is itself under U.S. color revolution pressure and would not like to help with such efforts.)

There are more ethnic groups on both sides of the Indian border that can and will be used to wage a guerrilla war against Myanmar’s military. With free supplies of modern weapons available to them they can create significant damage.

Meanwhile the Juan Guaido like exile ‘National Unity Government’ will be used to pretend that there is real opposition to the military government. The ‘Federal Union Army’ will be a copy of the ‘Syrian National Army’ – a loose assembly of mercenaries and diverse warlord groups. ‘White Helmets’ like propaganda organization will likely also soon appear.

The hope is to ignite a wide ranging civil war that will make any Chinese projects in Myanmar impossible to implement.

Bhadrakumar finds that the project is well coordinated:

The US Secretary of State Antony Blinken spoke with his Indian counterpart S. Jaishankar not less than three times in as many months since the military takeover in Myanmar. To be sure, India’s cooperation is crucial for the success of the Anglo-American enterprise in Myanmar.

Myanmar figured prominently at the G7 foreign ministers’ meeting in London on May 3-5. Jaishankar travelled to London and met with Blinken. Neither side divulged details, but a Deutsche-Welle report flagged that “China was at the top of the agenda as the G7 foreign ministers discussed a range of human rights issues. Addressing the Myanmar coup and Russian aggression was also on the docket.”

It added that the G7 ministers watched a video from Myanmar’s National Unity Government  to “update the ministers with the current situation on the ground.” The joint communiqueissued after the London meeting devotes much attention to Myanmar (paras 21-24). It expresses “solidarity” with the National Unity Government and issues call for comprehensive sanctions against the Myanmar military, including an arms embargo.

The birth pangs of insurgencies are never open to public view, as intelligence agencies get the actors into play. The Myanmar situation has reached that point. This is the first big bash of post-Brexit UK (“Global Britain”) on the world stage. As so often in modern history, London will lead from the rear.

Countermoves to the U.S. and UK plans will come from Russia and China. A week before the coup Russia’s Defense Minister Sergei Shoigu had visited Myanmar. On March 27 Russia’s deputy defense minister Alexander Fomin was present at the annual Armed Forces Day parade in Naypyidaw.

Russia has oil interests in Myanmar and sells weapons to its military. It is preventing any measures against Myanmar at the UN Security Council. In a sign that it knows what’s at stake it has warned that sanctions against the military could lead to a full blown civil war.

China has so far stayed quiet on the issue. It will try to keep a low profile. Any open Chinese intervention is out of question but Chinese help may become important if or when Myanmar’s government comes under financial stress.

It is sad to see that another little country, which wants nothing but to be left alone, will soon get destroyed in the ‘western’ attempt to keep China down. A proxy war between great powers no one but already rich people will benefit from.