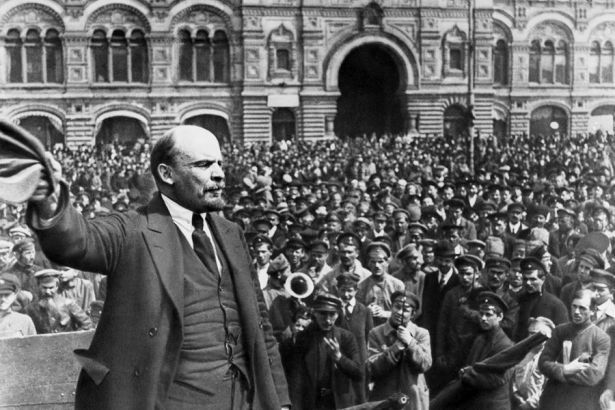 Lenin, Vladimir Ilyich Ulyanov, led the Great October Revolution in 1917 in Russia that has changed the world forever.

For the exploited masses, the October Revolution, with Lenin as its leader, unfurled the banner of a society free from all exploitation and oppression. The revolution’s Declaration of Rights of the Working and Exploited People is unprecedented in human history as it was the first to declare from the podium of political power of the exploited:

Abolish private ownership of all land, and parasitic sections of society; and

The power of the working people over the exploiters.

On Lenin’s proposal, the Declaration was incorporated as the first section of the Constitution of the Soviet Russia. (Presidential Library, “Declaration of rights of working and exploited people adopted”)

Thus, to the exploiting classes, the revolution stands as the exploiters’ uncompromising enemy, and, Lenin as the archenemy of those classes. The propertied classes despise Lenin as its ardent foe. The hatred and condemnation of Lenin by the exploiting classes, its theoreticians and media, and by imperialism is the show of class hatred of the propertied classes, of the exploiters. These classes never faced such an enemy, such a threat, such a challenge, such condemnation, such possibility of uprooting by the exploited classes before the October Revolution; and Lenin was the revolution’s theoretician, architect, and organizer. However, a group of writers and theoreticians like to “forget”, actually, they don’t forget, they simply serve their bosses obediently, the exploiters’ hatred towards Lenin; and, they sit “idle”, actually, they don’t sit idle, they simply get busy with licking their masters’ boots, instead of searching the reason behind this hatred. These writers and theoreticians “love” the exploited, dream “revolution”, search “humanity and humanism” while billions of the exploited are pressed into inhuman life of deprivation, exploitation, indignity.

Lenin takes his position with the question of class in one of his first works: “Can anyone with the least knowledge of Marx deny that the doctrine of the class struggle is the pivot of his whole system of views?” (What the “Friends of the People” are and How They Fight the Social-Democrats, henceforth FoP, Collected Works, henceforth CW, vol. 1, Progress Publishers, henceforth PP, Moscow, erstwhile USSR, 1972) It was written in 1894.

The proletarian revolutionary asserts: “[…] anybody who ignores the class struggle in the capitalist society […] ignores all the real content of the social and political life of this society […] [F]ailure to understand the class struggle makes him a reactionary, […] cause them to accept the worst enemies of the proletariat as their allies, can only hamper the workers’ struggle for emancipation instead of helping to strengthen, clarify and improve the organization of that struggle.” (FoP, emphasis in the original) What groups of “revolutionaries”, firebrand, are engaged with in some lands? Joining the storm troopers of imperialism, “the worst enemies of the proletariat as their allies”, as part of an imperialist design, as they forget the fundamental question – class and class struggle.

Lenin keeps no ambiguity as he says: “A class can only be fought by another class, and only by one that is already totally ‘differentiated’ from its enemy, totally opposite to it […]” (FoP, emphasis in the original). Groups of “revolutionaries” in some lands are joining one faction of ruling classes to oppose another – an act of class collaboration, a friendly act.

Lenin, the Marxist revolutionary, draws a line of difference as he writes: “The objectivist speaks of the necessity of a given historical process; the materialist [Marxist] gives an exact picture of the given social-economic formation and of the antagonistic relations to which it gives rise. […] [T]he objectivist always runs the risk of becoming an apologist for these facts; the materialist discloses the class contradictions and in so doing defines his standpoint. The objectivist speaks of ‘insurmountable historical tendencies’; the materialist speaks of the class which ‘directs’ the given economic system, giving rise to such and such forms of counteraction by other classes. [….] He [materialist] does not limit himself to speaking of the necessity of a process, but ascertaining exactly what social-economic formation gives the process its content, exactly what class determines this necessity.” (The Economic Content of Narodism and the Criticism of it in Mr. Struve’s Book, CW, vol. 1, PP, emphasis in the original)

In 1895, in the essay “Frederick Engels”, Lenin wrote: “They [Marx and Engels] showed that it is not the well-meaning efforts of noble-minded individuals, but the class struggle of the organized proletariat that will deliver humanity from the evils which now oppress it.” (CW, vol. 2, PP)

In the same essay, Lenin wrote: “And every class struggle is a political struggle.”

He also wrote in the essay: “They [Marx and Engels] taught the working class to know itself and be conscious of itself, and they substituted science for dreams.” In some lands, it’s difficult to find working class literature that can facilitate the working class to know itself, and groups of “revolutionaries” are busy with slogan mongering, pass all the time with making comments on so-called social media and with moment’s spontaneity making one jump here and another jump there, which they consider as “great revolutionary struggle”, but, which serve the ruling classes efficiently and effectively.

In his essay “The heritage we renounce”, written in 1897 during his exile in Siberia, Lenin writes: “As man’s history-making capacity grows broader and deeper, the size of that mass of the population which is the conscious maker of history, is bound to increase.” (CW, vol. 2, PP) In some lands, groups of “revolutionaries” have no time to look at the “conscious maker of history”, as they are busy with serving rightist of the rightist.

Lenin studied aspects of class and class struggle in Russia and in a number of countries as it was impossible to wage the exploiting people’s political struggle without grasping the issue.

His method, it’s well-known, was scientific. He was not just using a few words, sometimes incoherently, sometimes attracted by the words’ fieriness, which now-a-days is over-practiced by a few upstart “revolutionary” writers. He never was engaged with forming a few sentences and/or paragraphs that essentially carried neither any meaning nor any message, but sound “highly-intellectualized” as is found in writings of a section of writers trying to pose as Marxist. Lenin’s works are fully oriented towards a single cause – proletarian revolution, as the revolution was the path to humanity’s emancipation from exploitation, oppression, authoritarianism, from a life filled with lies, hatred and humiliation that the exploiting class infuse among the exploited masses to ensure survival of exploiting system, to ensure survival of exploitative property relation.

Nadezhda Konstantinovna Krupskaya, Lenin’s wife and one of his close comrades, was entrusted with the responsibility of Editorial Secretary of Iskra in 1901-’03. She was secretary of the Bolshevik faction of the Social-democratic Party. Krupskaya was secretary of the Party Central Committee from 1905-1908. She actively took part in preparation of the October Revolution. Krupskaya wrote about Lenin’s method of work: “No matter what work Vladimir Ilyich undertook, he did it extremely thoroughly. He himself did a tremendous amount of the ordinary routine work. The more importance he attached to any particular work, the more would he delve into all the details.” (Memories of Lenin, Martin Lawrence, London, n.d. tr. by Eric Verney, from the 2nd Russian edition, published in Moscow, 1930, Verney’s preface is dated as April 1930, Sussex) Groups of “revolutionaries” in some societies have no time to do any work and study thoroughly as they are always running from one “work” to another, from one gossip to another – a lumpen engagement.

Lenin had, according to Krupskaya, “eagerness to base every conclusion on facts […] He did not foist anything on the workers, but proved his contentions with facts.” “Lenin”, Krupskaya writes, “carefully studied the experiences of the revolutionary struggles of the world proletariat.” Groups of “revolutionaries” in some lands have no “time” to finds facts, as they’re ultra-busy with “revolutionary” work – vulgar gossip, irrelevant talks, lending voice to the rightists, and turning as propagandist of the rightists.

Lenin is perceptible in one of his letters. In a letter to P B Axelrod, Lenin wrote: “There is nothing I would like so much, there is nothing that I have hoped for so much, as an opportunity to write for the workers.” (Cited in Krupskaya, Memories of Lenin) Lenin wrote the letter from Siberia while in exile there, and it was dated July 16, 1897. This is Lenin, a revolutionary working for the workers.

“Lenin is a materialist,” writes A V Lunacharsky, known as “master of political pen portrait, “a pragmatist, a man without illusions, a man with magnificent grasp of all the thrusts and chess moves that his opponents can make against him, who underscores the game and counter-attacks well, that he is a great force standing in the very thick of things.” (“A champion of the happiness of mankind”, January 27, 1924)

“What is Lenin seeking-ambition, power? We know there is none of this in him. He never thinks of himself. He is a man, he is a leader. He is not one of those idealists who wallow in daydreams, dissolve in smiles or who behave as if the beautiful future was an already existing reality. No, Vladimir Ilyich is perfectly well aware that an aim is one thing while working to achieve that aim is quite another.” (ibid.)

The revolutionary writes about the basic traits of Lenin: “[A]bove all of the proletarian outlook – purposeful work, working with minimum expenditure of energy and real work to achieve the goal […]” (ibid.)