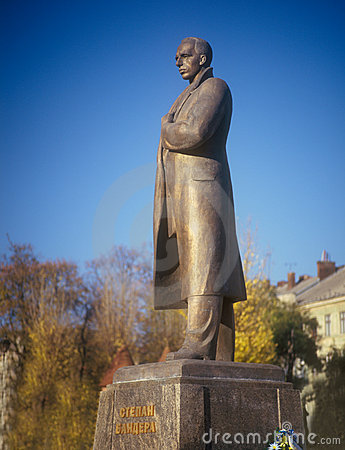 Politics in the Ukraine can only be understood by reference to its history and ethnic and cultural make-up – a make-up criss-crossed by lasting and entrenched ethnic, cultural and political differences. The country has long been split into the northern and western Ukraine, where Ukrainian is the official and everyday lingua franca, and the more industrialised regions of the east and south where a mixture of Russian speaking Ukrainians and ethnic Russians reside. Additionally, there has long been Hungarian and Romanian settlement in the west of the country, and a particularly important Polish presence, whose unofficial capital, Lviv, was once the Polish city of Lwow. The Russian Orthodox Church is the predominant form of Christianity in the East, whilst in the west the Christian tradition tends towards Roman Catholicism.

Politically the Eastern and Southern Oblasts (Regions) which includes the cities and centres of heavy industry, Kharkov, Lugansk, Donetsk, Zaporozhe, Nikolayev, Kherson, Simferopol and Odessa, have tended to tilt towards Russia whilst the western regions have had a more western orientation. This has traditionally been reflected in the electoral division of the country. There is no party which can be considered ‘national’ in this respect, except ironically, the old Communist party, which of course is now banned. The major regional parties have been the Fatherland party of Yulia Tymoshenko (since renamed) and the former head of government, Arseniy Yatsenyuk as well as the ultra-nationalists predominantly in the west of the country, and the deposed Victor Yanukovich’s Party of the Regions in the East (now defunct) along with its junior partner in the coalition, the Ukrainian Communist Party.

Did the U.S. Carry Out a Ukrainian Coup?

However, what is new since the coup in February 2014 there has been the emergence from the shadows of ultra-nationalist (fascist) parties and movements, with both parliamentary and extra-parliamentary (i.e.,military) wings. In the main ‘Svoboda’ or Freedom Party, and the paramilitaries of ‘Right Sector’ (Fuhrer: Dimitry Yarosh) who spearheaded the coup in Kiev; these have been joined or changed their names to inter alia the Radical Party, and Patriots of the Ukraine; this in addition to the punitive right-wing militias, such as the Azov Regiment responsible for numerous atrocities in the Don Bas.

Suffice it to say, however, that these political movements and parties did not emerge from nowhere.

This far-right tradition has been historically very strong in the western Ukraine. The Organization of Ukrainian Nationalists (OUN) was first established in 1929 and brought together, war veterans, student fraternities, far-right groups and various other disoriented socially and political flotsam and jetsam under its banner. The OUN took its ideological position from the writings of one, Dymtro Dontsov, who, like Mussolini had been a socialist, and who was instrumental in creating an indigenous Ukrainian fascism based upon the usual mish-mash of writings and theories including Friedrich Nietzsche, Georges Sorel, and Charles Maurras. Dontsov also translated the works of Hitler and Mussolini into Ukrainian.

The OUN was committed to ethnic purity, and relied on violence, assassination and terrorism, not least against other Ukrainians, to achieve its goal of a totalitarian and homogeneous nation-state. Assorted enemies and impediments to this goal were Communists, Russians, Poles, and of course – Jews. Strongly oriented toward the Axis powers OUN founder Evhen Konovalets (1891-1938) stated that his movement was ‘’waging war against mixed marriages’’, with Poles, Russians and Jews, the latter which he described as ‘’foes of our national rebirth’’. Indeed, rabid anti-Semitism has been a leitmotif in the history of Ukrainian fascism, which we will return to below. Recruits of the Azov Battalion, a unit that openly proclaims its allegiance to neonazi beliefs.

Konovelts himself was assassinated by a KGB hit-man in 1938 after which the movement split into two wings: (OUN-m) under Andrii Melnyk and, more importantly for our purposes (OUN-b) under Stepan Bandera. Both wings committed to a new fascist Europe. Upon the German invasion in June 1941, the OUN-b attempted to establish a Ukrainian satellite state loyal to Nazi Germany. Stepan Lenkavs’kyi the then chief propagandist of the OUN-b ‘government’ advocated the physical destruction of Ukrainian Jewry. OUN-b’s ‘Prime Minister’ Yaroslav Stets’ko, and deputy to Bandera supported, ‘’the destruction of the Jews and the expedience of bringing German methods of exterminating Jewry to Ukraine, barring their assimilation and the like.’’

During the early days of the rapid German advance into the Soviet Union there were some 140 pogroms in the western Ukraine claiming the lives of between 13000-35000 people (Untermensch, in fascist terminology). In 1943-1944 OUN-b and its armed wing the Ukrainian Insurgent Army (Ukrainska povstanska armia – UPA) carried out large scale ethnic cleansing resulting in the deaths of tens of thousands; this was a particularly gruesome affair in Volhynia where some 90000 Poles and thousands of Jews were murdered. The campaign of the UPA continued well into the 1950s until it was virtually wiped out by the Soviet forces.

It should be said that during this early period Bandera himself had been incarcerated by the German authorities up until his release in 1944, since unlike Bandera they were not enamoured of an independent Ukrainian state but wanted total control. Bandera was only released at this late date since the German high command was endeavouring to build up a pro-German Ukrainian quisling military force to hold up the remorseless advance of the Red Army. Also pursuant to this it is also worth noting that during this period the 14th Galizian Waffen SS Division, a military Ukrainian collaborationist formation established by Heinrich Himmler, was formed to fight the Soviet forces, and yet another being the Nachtingal brigade; (1) this unit was integrated into the 14th Galizian in due course. It is also interesting to note, that every year, and up to 2014 commemoration ceremony including veterans of this unit takes place with a march through Lviv in an evening torchlight parade – genuine Nazi pastiche. The flag of this unit is not dissimilar to the Peugeot logo, the standing lion, and can be seen at ultra-nationalist rallies as well as football matches involving Lviv Karparti FC. There are also numerous statues of Bandera across Ukraine, and since the 2014 coup even street names bearing the same name. Significantly the UPA have now received political rehabilitation from the Kiev Junta, with Bandera declared a hero of the Ukraine and the UPA rebranded as ‘freedom fighters.’ One particularly splendid statue of Bandera stands proudly in Lviv and is usually adorned with flowers.

Other novel attractions the capital of Banderestan include ‘Jewish themed restaurants’ one such is Kryivka (Hideout or Lurking Hole) where guests have a choice of dishes and whose dinning walls are decorated with larger than life portraits of Bandera, the toilet with Russian and Jewish anecdotes. At another Jewish themed restaurant guests are offered black hats of the sort worn by Hasidim. The menu lists no prices for the dishes; instead, one is required to haggle over highly inflated prices ‘’in the Jewish fashion’’. Yes, it’s all good clean fun in Lviv. Anti-Semitism also sells. Out of 19 book vendors on the streets of central Lviv, 16 were openly selling anti-Semitic literature. About 70% of the anti-Semitic publications in Ukraine are being published by and educational institution called MUAP (The Inter-Regional Academy of Personnel Management). MAUP is a large, well-connected and increasingly powerful organization funded from outside anti-Semite sources, and also connected to White Supremacist groups in the USA and to the David Duke, former Grand Wizard of the Ku Klux Klan.

(It is one of the ironies of history that if the Zionists in AIPAC and the Washington neo-con think tanks, and the Labour Party Friends of Israel, were so concerned about anti-Semitism, they might try looking for it in Lviv. They wouldn’t have to search very far.)

Putin was quite clear about the nature of the disturbances in Ukraine: “It was a coup.”

Present day neo-Nazi groupings in Ukraine – Svoboda (Freedom) party and Right Sector – have been the direct descendants from the prior ideological cesspool. Heading Svoboda is Oleh Tyahnybok. Although these are separate organizations Tyahnybok’s deputy Yuriy Mykhalchyshyn is the main link between Svoboda’s official wing and neo-Nazi militias like Right Sector. The Social-Nationalist party as it was formerly known chose as its logo an amended version of the Wolfsangel, a symbol used by many SS divisions on the Eastern front during the war who in 2004 a celebration of the OUN-UPA, stated in 2004, that ‘’they fought against the Muscovite, Germans, Jews and other scum who wanted to take away our Ukrainian state.’’ And further that ‘’Ukraine was ruled by a Muscovite-Jewish mafia.’’ Tyahnybok came under pressure from the then President, Yuschenko, to retract his inflammatory statements, which he did, but he then retracted the retraction! 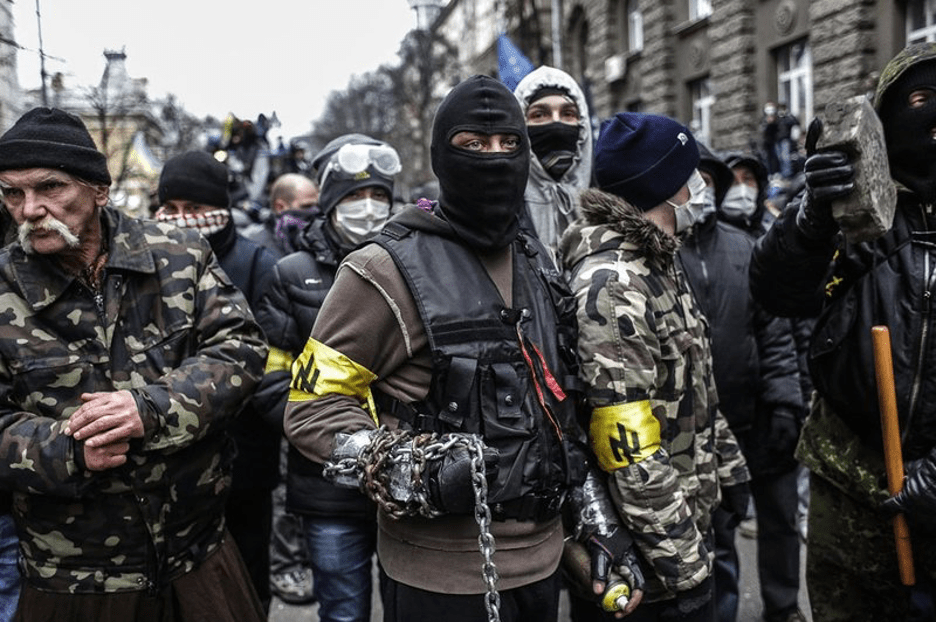 As expected, neonazis were a prominent part of the coup.

Given the fact that Svoboda was, apart from its stamping grounds in the west, making little national electoral headway, it was essential to clean up its image and deny its Nazi past. But this was always going to be difficult since the members of such groups cannot help the unscripted outbursts and faux pas which they tend to make and which reveals their true colours. For example, following the conviction and sentencing of John Demjanjuk to five years in jail for his role as an accessory to the murder of 27,900 people at the Sobibor death camp, Tyahnybok travelled to Germany and met up with Demjanjuk’s lawyer, presenting the death camp guard as a hero, a victim of persecution ‘’who is fighting for truth’’.

And so it goes on. We can therefore infer that this organization is inveterate fascist. More disturbing Svoboda has links with the so-called Alliance of National European Movements, which includes: Nationaldemokraterna of Sweden, Front Nationale of France, Fiamma Tricolore in Italy, the Hungarian Jobbik and the Belgian National Front. More importantly Svoboda held several ministerial portfolios in the Kiev administration, and Right Sector swaggers around Kiev streets with impunity, and/or are being drafted into a National Guard to deal with the separatist movements in the east, or to beat down anyone who doesn’t conform to their Ayran racial and political ideals.

One would have thought that this mutating revolution in the Ukraine would have drawn attention of the centre-left to the fact that fascism had gained a vital beachhead in Europe, and that the danger signals should be flashing. But not a bit of it; a perusal of the Guardian newspaper quickly reveals that their chief concern has been with a non-existent ‘Russian threat’. One of their reporters – or old friend, Luke Harding -described Right Sector as an ‘’eccentric group of people with unpleasant right-wing views.’’ Priceless! This must rank as the political understatement of the century. In fact, the Guardian was simply reiterating the US-imposed neo-conservative foreign policy. But naturally, this is par for the course.