Ramsey Clark: An Essential Voice of Dissidence from the Center of U.S. Power 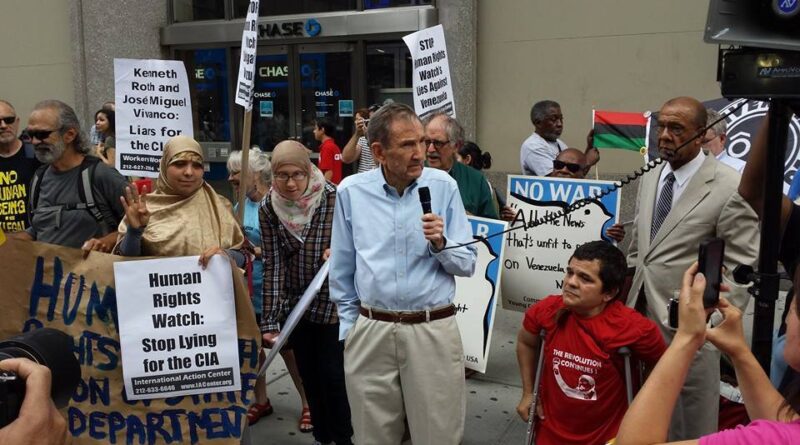 During the heat of the Gulf War under the George H. W. Bush administration, I had the opportunity in New York to meet an extraordinary human being: Ramsey Clark. It was an event to protest the State Department and Pentagon’s arrogantly labeled “Operation Desert Storm.”

Ramsey was a quixotic figure admired by everyone on stage at the event. This former U.S. Attorney General, incredibly, opposed U.S. intervention in Cuba, Venezuela, and Nicaragua. On that occasion he gave a detailed speech about the conflict unfolding before our eyes, a war in living color brought into our homes courtesy of CNN. But we saw no blood or dead bodies, only fireworks in what looked like a Nintendo video game in which very little “collateral damage” was shown. It was a long-distance war for which television viewers were kept far removed from the pain and suffering of the Iraqi victims.

Ramsey Clark was an extraordinary anomaly within the U.S. establishment. A lawyer by profession, he rose to be Attorney General, an office which placed him at the forefront of many important struggles for civil and human rights. After leaving the pinnacle of power, he embraced progressive causes around the world, even if it brought him into direct confrontation with U.S. hegemony. This included his opposition to the strategy of applying illegal unilateral coercive measures (sanctions) against countries that did not fall in line with Washington’s foreign policy.

The second time I met Ramsey Clark I knew that he was traveling to Iraq to serve as a defense attorney for Saddam Hussein in a trial imposed by the Western world to convict almost the entire Iraqi cabinet—proceedings that many experts in international law considered illegal. Ramsey also opposed the death penalty as a matter of principle. I was able to overcome my feelings of intimidation before this renowned figure, and approached him. I asked, “Don’t you think it will be very hard for you to accomplish anything in that kangaroo court?”

He answered, “Yes, but it would be worse to do nothing. We must march into battle even though we know we will lose. We must go knowing that we are on the side of truth and justice.” We looked at each other and smiled.

At the top of the U.S judicial system

Ramsey served his country as the 66th U.S. Attorney General from 1967 to 1969 during the Johnson administration. In his previous post as Assistant Attorney General he had been pivotal in the drafting of some of the most important environmental and civil rights legislation produced by any generation before or since. He contributed to the Civil Rights Act of 1964, the Voting Rights Act of 1965, and legislation that later inspired the creation of the Environmental Protection Agency  (EPA).

Support this progressive voice and be a part of it. Donate to COHA today. Click here

After leaving public office, he ran for President of the United States in 1972 and for Senate in 1974 and 1977. He was the son of Supreme Court Justice and former Attorney General, Tom C. Clark. Ramsey also founded the International Action Center with the idea of building a platform for social justice and creating a more just and equal world.

His activism took him to such countries as Vietnam, Iraq, Iran, Libya, Palestine, Sudan, and many others that were under attack or faced potential aggression from the United States, putting his life in danger countless times.

Lauded the world over

Ramsey opposed the Vietnam war from the outset and remained steadfast in his opposition to unilateral coercive measures imposed by the United States around the world.

He was awarded the Gandhi Peace Prize in 1992[1] and the United Nations Prize in the Field of Human Rights on December 10, 2008, the sixtieth anniversary of the adoption of the Universal Declaration of Human Rights.[2] He was also given the International Courage of Conscience Award from the Peace Abbey Foundation.[3]

All of this not only garnered Ramsey tremendous admiration, but also the antagonism of those in the Establishment whom he challenged incessantly.

Solidarity with Cuba, Nicaragua, and Venezuela

In Latin America he became very engaged in solidarity with Nicaragua, Cuba, and Venezuela. In 1984 the Sandinista government sued the United States at the International Court of Justice (ICJ), the United Nations’ highest court, for its support of the contra army. But Washington withdrew its recognition of the Court’s jurisdiction. The case had both political and legal ramifications for the United States. Ramsey Clark served as an advisor at that time to a young attorney named Paul Reichler who was leading the case.

When he travelled to Nicaragua Ramsey stayed in the home of the revered priest and former Foreign Minister, Father Miguel d’Escoto, who had also served as President of the United Nations General Assembly. They were close friends. On these visits Fr. d’Escoto arranged gatherings with Latin American leaders, and the two of them worked together on a variety of issues for over 40 years, including the situations of Cuba and Nicaragua.

Personal memories of a meeting with a young Nicolás Maduro

Some of my personal experiences speak clearly to the very human nature of Ramsey Clark. In 2000 a young man just elected to the new National Assembly of Venezuela arrived in New York and asked me to arrange his itinerary. The first meeting that the newly elected Bolivarian legislator had in New York was with Ramsey Clark, at his law firm on 12th Street in downtown Manhattan. This young legislator, Nicolás Maduro, was delighted with this very fraternal conversation with the former Attorney General. And I was able to arrange this even though I had contacted Ramsey at the last minute. He not only received us, but indulged us in a lengthy conversation about almost everything happening in Latin America.

Solidarity with Venezuela based on respect for the rule of law

Ramsey was a leading figure in solidarity with the Bolivarian Revolution of Venezuela at many key moments. His support was not ideological, but based on principle. He refused to accept the illegal sanctions policy or any interventionism that violated the sovereignty of other countries. For this reason, he did not hesitate to defend the people and denounce wrongdoing.

On November 8, 2005 at the historic Town Hall of Times Square, New York, we held the biggest event the United States had seen in support of the Venezuelan Revolution, called “Night of Solidarity with Bolivarian Venezuela.” The large venue was near capacity and a Miami Herald journalist in attendance wrote, “Chávez must have a lot of supporters to fill a venue like that in the heart of Manhattan… it must mean that the Bolivarian Revolution has thousands of followers.”

On Saturday, September 23, 2006, the Minister of Foreign Affairs of Venezuela, Nicolás Maduro, who was part of Venezuela’s delegation attending meetings at the United Nations, was detained by authorities at JFK International Airport for 90 minutes as he was boarding a plane to return home. I was broadcasting live on Radio Pacifica at that time when the Foreign Minister’s assistant called me to explain the situation. I immediately called Ramsey and told him what was happening, asking whether he could help us and go to the Venezuelan mission to the UN. I did not expect him to be able to help at that late hour with such a sudden request, but I was to learn that day about his commitment and devotion to justice. Arrive he did. I was shocked to see him waiting calmly, unrecognized by the Venezuelan diplomats scurrying to and fro. When then Foreign Minister Nicolás Maduro arrived, he saw Ramsey and greeted him outside the Venezuelan mission. Roy Chatterton, who was Venezuela’s ambassador to the OAS at the time, served as interpreter for them as they found a quiet place to talk about what to say or not say to the press. The future President of Venezuela listened attentively. Ambassador Chatterton ended it by saying, “A very important suggestion.” Ramsey’s opinions were highly regarded.

Later, on September 13, 2013, I invited Ramsey to another protest, this time before the United States’ diplomatic mission to the United Nations. He attended, without fail, as always. At that event we were going to deliver a document denouncing U.S. intervention in Venezuela. I asked Ramsey if he would mind wearing a tricolor coat with the colors of the Venezuelan flag. He responded, “If I am going to represent Venezuela, I had better put on that coat and it will be an honor.” From a distance we were able to observe the disgruntled face of the First Secretary of the U.S. Embassy to the UN.

Ramsey accompanied us in countless activities, not only in New York city, but also in Washington, DC and Boston. He was an unconditional ally.

Support for the independence and sovereignty of Cuba

Ramsey not only supported Venezuela’s sovereignty, but Cuba’s as well. He was a strong critic of the legal proceedings against the “Cuban Five,” denouncing all the judicial irregularities in the trial. “If I were Attorney General today and learned about this propaganda campaign during the trial of the Cuban Five, I would have to dismiss the charges. Any Attorney General should do the same,” he said.

He had always appreciated the Cuban Revolution. He told the press that, “Fidel has shown that a country in the midst of struggle and short on resources can educate, house, and provide healthcare, jobs, and everything that humanity needs. And look at the rest of the world. We need that model.”

Ramsey Clark died on April 9, 2021 at his home in New York city at the age of 93. He was an example of love for one’s neighbor, respect for life, and passion for justice.

As Curtis Doebbler, colleague and friend to Ramsey Clark for some 30 years, put it,

William Camacaro is a Senior Analyst at the Council on Hemispheric Affairs in Washington, DC (COHA).

This article was edited by Patricio Zamorano, Director of COHA