PLIGHT OF FARMERS IN INDIA

State of India’s environment: Why farmers kill themselves 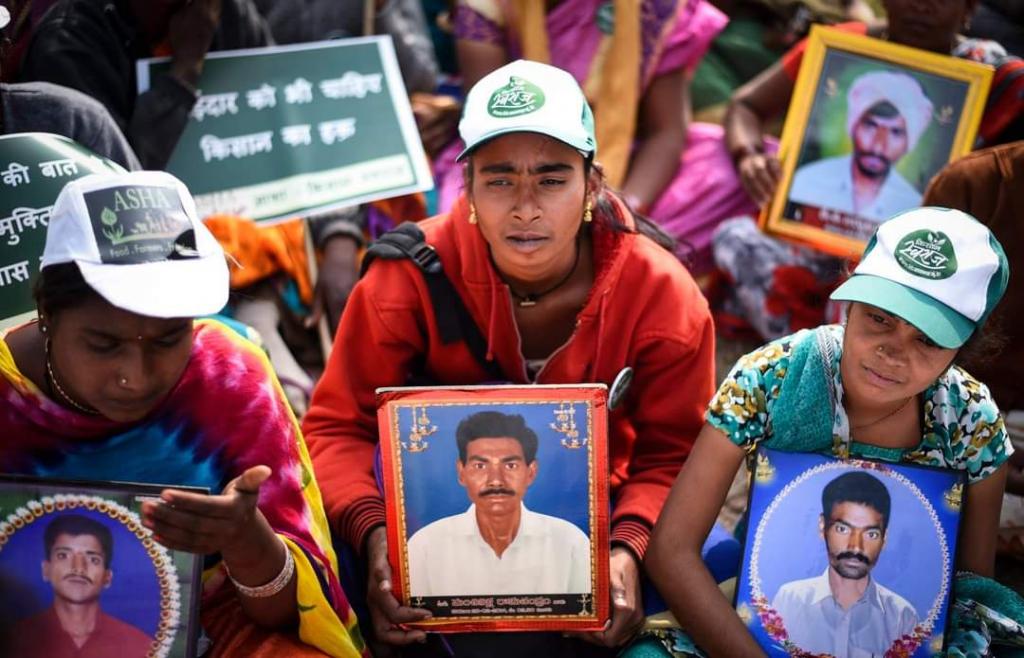 Family members of farmers who committed suicide demonstrate in Delhi (December 2018). Photo: Adithyan PC
More than 28 farmers and farm labourers die by suicide in India every day, according to the 2021 State of India’s Environment (SoE) report — an annual brought out by Down To Earth in association with Delhi-based non-profit Centre for Science and Environment (CSE).

The SoE report highlighted the suicide numbers in recent years:

The toll in increased between the two years in:

The report will be released in New Delhi February 25, 2021 at a webinar by more than 60 environmental thinkers and activists, journalists and academics from across India.

The National Crime Records Bureau is silent on what leads to farmer suicides, pointed out DTE Managing Editor Richard Mahapatra. A 2016-17 government report had listed three probable causes: Frequent crop failures due to vagaries of monsoons, lack of assured water, and pest attacks and diseases. “The true reason behind these deaths is that agriculture has become a severely loss-making profession and calling. The market does not the pay our farmers their due price,” Mahapatra said.

CSE Director-General Sunita Narain dug deeper on how the Indian farmer is at a disadvantage even as their counterparts in developed countries are well taken care of by their governments:

(They) do not get the financial support needed to make farming lucrative. At the same time, the cost of inputs — from seeds to water and labour — is increasing; risks are going up as well because of climate change-triggered extreme weather. When their crops become costly, the government steps in to import cheaper food. Our farmers, thus, suffer at both ends. It is for this reason that they are demanding a minimum support price (MSP) as an insurance against price volatility.

The existing MSP system is faulty: While MSP is fixed for 22 crops, in reality it is used only for a few (wheat, paddy, etc) for which the government has a procurement system, Narain pointed otu. The government’s own data reveals that almost 70 per cent market transactions for 10 select crops in 600 wholesale markets were at below MSP.

“India has been reeling from a severe agrarian distress for some years now; suicides by farmers and farm labourers are a tragic and painful manifestation of this distress. It is time we talked about the real cost of the food we eat, and about how to benefit the farmers who grow our food,” she added.

You can buy your copy of State of India’s Environment report 2021 at the DTE Book Store.