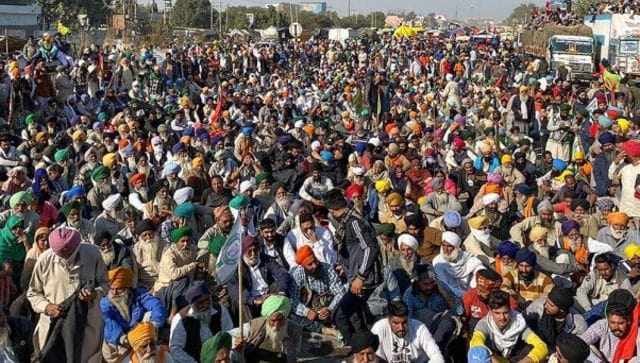 India’s Supreme Court on Friday declined calls to ban a weeks-long farmers’ protest and asked the government and unions to help form a committee of experts to mediate between them.

“We make it clear that we recognize the fundamental right to protest against a law. There is no question of balancing or curtailing it. But it should not damage anyone’s life or property,” Chief Justice S. A. Bobde said.

Thousands of farmers angered by three agricultural laws that they say threaten their livelihoods have intensified their protests by blocking highways and camping out on the outskirts of the capital New Delhi.

Petitioners had approached the Supreme Court to complain that the protests had hampered drivers and making it difficult for people to access emergency medical services.

“We are of the view at this stage that the farmers’ protest should be allowed to continue without impediment and without any breach of peace either by the protesters or the police,” Bobde said.

On Friday, a farmers’ group filed a petition with the Supreme Court seeking the repeal of the three laws. The Bharatiya Kisan Union, or Indian Farmers’ Union, argued that the laws were arbitrary because they were enacted without proper consultations with stakeholders.

Indian Prime Minister Narendra Modi’s administration in September introduced the farm bills that the government says will unshackle farmers from having to sell their produce only at regulated wholesale markets and make contract farming easier.

Farmers insist that the new laws will leave them at the mercy of big corporations.

Six rounds of talks between government ministers and farmers’ union leaders have failed to resolve the situation.

The government has said while the laws can be amended, it is against repealing the bills.

India’s vast agriculture sector, which makes up nearly 15% of the country’s $2.9 trillion economy, employs about half of its 1.3 billion people.

The Supreme Court on Thursday suggested that the government consider delaying implementation of new agricultural reform laws to restore a dialogue with tens of thousands of protesting farmers.

The protesting farmers are saying the legislation will drive down crop prices and devastate their earnings.

Chief Justice Bobde also deferred a proposal by the court to set up a mediation panel until justices receive the government’s response and hear arguments from lawyers representing the protesting farmers, possibly next week.

India’s Attorney-General K.K. Venugopal said he will get back to the court after discussing the matter with the government.

The farmers have been blocking half a dozen major highways on the outskirts of New Delhi for three weeks and say they will not leave until the government repeals what they call the “black laws” passed by Parliament in September.

In addition to blocking the movement of people, the massive protest has dealt a blow to manufacturing and business in northern India.

On Wednesday, justices on the court offered to set up a mediation panel after five rounds of talks between the government and farmers failed to end the impasse.

Protest leaders have rejected the government’s offer to amend some contentious provisions of the laws.

The protesting farmers say the laws will lead to the cartelization and commercialization of agriculture and make farmers vulnerable to corporate greed.

They fear the government will stop buying grain at minimum guaranteed prices and corporations will then push prices down.

The government insists the reforms will benefit farmers and says they will enable farmers to market their produce and boost production through private investment.

A group of New Delhi lawyers has also filed a petition with the court seeking an order to the farmers to vacate the highways connecting northern states to the Indian capital.

Amidst a series of allegations made by many ruling BJP leaders to derail the farmers’ protest, the Indian state of Uttar Pradesh (UP) government has sent farmers a notice of Rs 5 million for protesting against the new farm laws. The notices were sent to six leaders in UP’s Sambhal district, mainly from the Bharatiya Kisan Union (Asli), asking them to submit personal bonds of Rs 50 lakh (5 million) each to prevent them from “inciting” farmers from joining the protests, Indian Express reported.

According to the report, six other protesters were also issued notices seeking bonds of Rs 500,000 each on December 12 and 13 under section 111 of the CrPC, which authorises the magistrate to send a show-cause notice under a bond.

However, the police on Thursday claimed the amount was a “clerical error” and will be reduced. “The SDM is currently on leave and once he comes back we will look to issue a bond of Rs 50,000 since the earlier one was a clerical error,” said Arun Kumar Singh, circle officer, Sambhal told Indian Express.

“They decided on a random number as long as it could deter us from protesting. It is a non-violent protest. Why is the administration so afraid of farmers protesting? They have mentioned Rs 50 lakh as if we are terrorists. They know that we do not have that kind of money,” said Rajpal Singh Yadav, district president of BKU (Asli), told the Indian Express. Yadav is among the six who have been served notices seeking Rs 50 lakh in personal bond.

“Protests are taking place in the entire country but nowhere will you hear that the administration is threatening them with Rs 50 lakh. This is sheer harassment,” said Rajveer Singh of Rashtriya Kisan Mazdoor Sangharsh, who was served with the notice told Indian Express.

According to the report, the notice issued by Sambhal SDM Deependra Yadav stated: “In the context of what is happening in Delhi and other farmer agitations, six persons are going village to village and inciting the farmers with false information, which can lead to the breakdown of peace in the region. We are satisfied with the report of the local police station in this regard. It is hereby directed to furnish a reason as to why the farmers should not be providing a guarantee of worth Rs 50 lakh (5 million) and a bail amount of the same money to maintain peace for one year.”

This is not the first instance of the government trying to keep protesters off the streets. UP chief minister Yogi Adityanath recently came up with a curious analysis of why the farmers are vehemently protesting against the farm laws, even as Delhi-NCR witnesses a cold wave: anger over the Ayodhya Ram temple issue. Another BJP leader, Gujarat deputy chief minister Nitin Patel, has alleged that “anti-national elements, terrorists, Khalistanis, communists and pro-China people” are supporting farmers.