‘We Won’t Get Scared’: The Spirit of Farmers’ Protest Is Inescapable in Punjab

Group of women gathered at Gurpreet Kaur’s house to speak with the press. Photo: Pawanjot Kaur

Niamian/Fatehpur/Baras (Punjab): There is an uprising in Punjab. People in the state are acutely aware that they are at the epicentre of the ongoing farmers’ stir. They know that all eyes – domestic and international – are on the farmers’ movement.

Many in the cadre are enjoying this attention. Elaborate discussions on Twitter spats between celebrities, minute by minute updates on the table-talks, and the media coverage of their movement are taking place in almost every household.

The micro-level management of the cadre by farmers’ unions has ensured that wedding ceremonies, farm-work and other essential engagements of people are done without too much trouble. In addition, Reliance petrol pumps, Reliance marts, toll plazas, and Adani’s cold storages continue to be under the siege of farmers.

According to Paramjeet Kaur, a member of the Bhartiya Kisan Union (Ekta-Ugrahan), 68 small- and medium-sized, day and night morchas (rally) are taking place in Patiala district alone. At one site in Ghagga, 32 villages have set up a day and night sanjha morcha (common sit-in) where protesters give speeches, sing songs, run a community kitchen and generally keep the energy high.

Gurpreet Kaur Baras has been put in charge of the morcha until she makes her second trip to the Tikri border. After she leaves, her husband will be in charge of the morcha. The in-charge mobilises those who haven’t joined the movement yet, coordinates with the press and generally takes care of things at the protest site, Gurpreet told The Wire. Gurpreet Kaur Baras, the incharge of the morcha at Ghagga. Photo: Pawanjot Kaur

Baras is a large village with around 2,500 people as a part of its panchayat. A village-level committee has been formed in Baras by the farmers’ unions to keep track of who is coming back and going to the Delhi morcha, and when. The committee also keeps track of resources which are needed – flags, tarpaulins for trolleys and food among other things.

One hour away from Baras is the village of Fatehpur. No committee has been formed here. Shingara Singh, one of the agitating farmers came back to his village from the Singhu border to tend to his potato farm on December 8. The next day, a new group left the village for the border in relay. According to the villagers, the village must be duly represented at the morcha.

“A group of us came back to harvest our potatoes. The ones who have left today, finished harvesting potatoes before going. I came back last night and today half of all my potatoes will be harvested. Other than potato harvesting, there’s not much work in the farms now,” said Shingara Singh who, like many others in the village, grows potatoes, wheat and paddy. Each season, Singh sells potatoes to Pepsico and takes wheat and paddy to the APMC mandi. This season, he is hopeful that potatoes will bring good returns. A year ago, he suffered extreme losses. The MSP of wheat and paddy sustains Singh. He started growing potatoes in order to diversify his farming. With the implementation of the new farm laws, he is fearful that if the MSP of wheat and paddy eventually gets removed, both crops will become susceptible to price fluctuations of the market– just like potatoes. Besides, Shingara Singh’s experience in selling his produce to a conglomerate hasn’t been very good. He is sceptical of new private corporations joining the market.

Standing in a field full of freshly harvested potatoes soon-to-be converted into branded chips, Shingara Singh said, “I’ve come back for essential potato harvesting. I left my tractor and my trolley at the morcha. It wouldn’t have looked good if I removed my trolley from the rows of trolleys lined up at the Singhu border. So I borrowed my friend’s tractor to harvest potatoes”. “onney mennu bhaicharey ch de ditta (he gave it to me because of our brotherhood),” he added. A few metres away from the farm, at Shingara Singh’s home, his wife Baljeet Kaur said that people fighting for their rights, like they were doing now, made her happy. “Other than my husband, I also sent my 29-year-old son to the morcha for a few days,” she said with a sense of pride.

“I really wanted to go to the protest too, but someone has to be here as well,” she said, as she sat in her courtyard, next to an under-construction hall and kitchen. Shingara Singh, standing beside her, added, “we are also renovating our house. Labour works here all day. So the farm, the house and the morcha, everything is on our minds right now.” The sarpanch (village head) of Fatehpur, Jagroop Singh, who left for Singhu a day after Shingara Singh arrived, lives in a joint family. His older brother, sister, wife and mother are cheering for him back home. His mother, in her 80s, said that Modi Sahab must listen to her kids soon. “We gave votes to Modi thinking that he is our brother, he also took votes from us by calling us sisters, then why is he doing ‘chaar sau beesi’ (trickery) with us. Modi sahab must listen to our kids,” she said. The mother of Jagroop Singh who left for the Singhiu border on December 9. Photo: Pawanjot Kaur

Family members of those who are at the protest site say that they have ‘no tension’ because according to them, this is a just fight which, they firmly believe, will be won by them.

“Koi tension nahi hai sannu (There’s no tension amongst us)”, said Baljeet Kaur. Four to five houses away, at Jagroop Singh’s home, his older sister said that it is Modi who is giving them tension, and not the time spent at the morcha.

At Baras, Gurpreet Kaur said, “We are not worried about anything. All those farmers who have lost their lives at the border are martyrs for us. We don’t say they died. Death comes at home. On the battleground, it is Shahidi (martyrdom).”

At another small village called Niamian, situated closer to Mohali city, the grandchildren of Jaspal Singh Niamian who has been at the Singhu border since the last two weeks, are itching to go to Delhi.

“Je Modi ni maneya, pher mai vi jaungi morchey te (If Modi doesn’t agree, I will go to the protest too)”, said 10-year-old Yashmeen Kaur. Her younger five-year-old brother jumped into the conversation and said, “Main vi jawanga (I will go too)”. When asked why he wants to go, he said, with a toothless smile, “Oh ni pata, par jaana hai (Don’t know why, but I want to go)”.

As schools remain shut because of the coronavirus outbreak, kids – now with a lot of time and energy with them, are widely thinking and talking about the morcha. “Bachey bachey nu pata ki horeya hai (Every child knows what’s happening),” Paramjeet Kaur of BKU-Ugrahan told The Wire at Baras village.

In Baras, Burmanjot, a 12-year-old boy, who came back from the Tikri border with his father and grandmother just a few days ago, did not shy away from saying why he was protesting. “We are protesting because we want Modi to take back the laws,” he said. The words Modi, Morcha and Haq (rights), are on everyone’s lips. 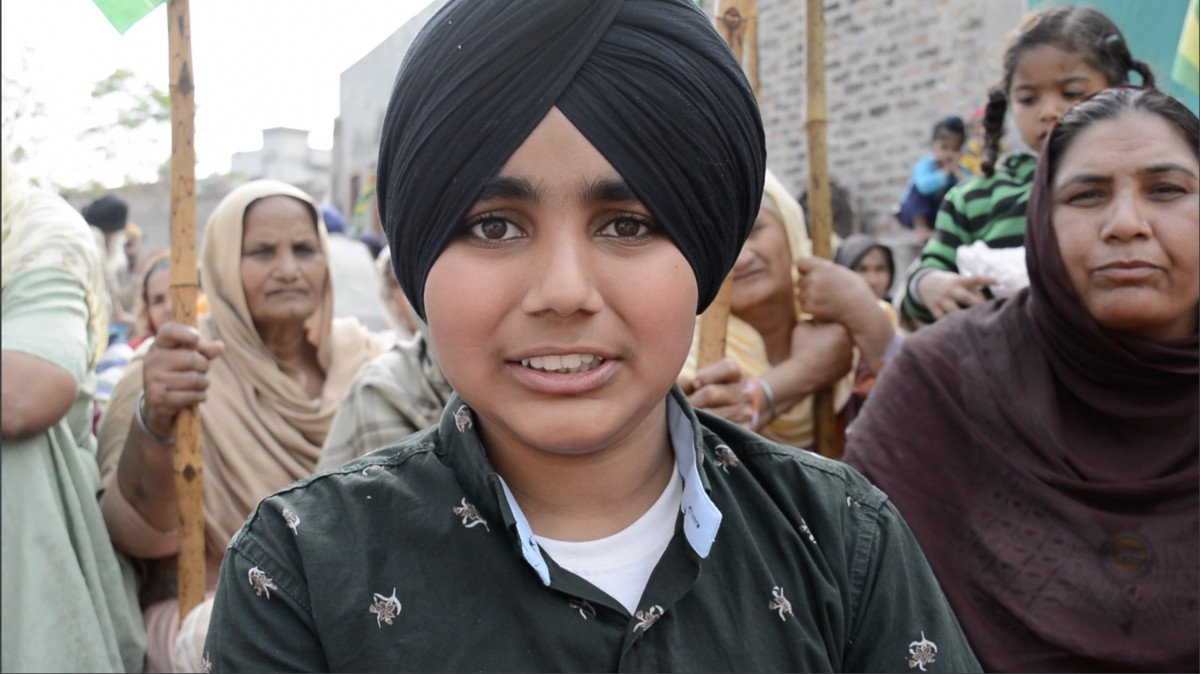 The months of November and December usher in the wedding season in most parts of North India. In rural Punjab, all weddings are wrapped up before December 15. This is because from December 15 till January 15, Sikhs observe ‘Shahidi’ (Martyrdom) of the four Sahibzadas (sons) of the tenth Sikh guru Gobind Singh.

But without delaying the ceremonies, the mobilisation for the protest has happened alongside. “I have been busy with my son’s wedding, so I couldn’t join my brother Jaspal at the Singhu border. Last night, we took my son’s baarat and today I’m free. I will leave for the borders as soon as possible,” said Avtar Singh Niamian who missed the presence of his brother at his son’s wedding.

The ladies in Niamian also did a ‘Jaago’ function, as it is a ritual before a Sikh wedding, where they visit one home after another singing songs and eating food. “But this time,” Avtar Singh said, “there was sloganeering against the government at the ‘Jaago’ ceremony”. Various videos of wedding ceremonies infused with sloganeering in favour of the movement have been circulating on the internet as well. One video, which recently went viral, shows a group of singers singing ‘boliyaan’ regarding the farmers’ movement. Boliyaan or couplets are often sung at ceremonies in Punjab to express certain emotions or situations. The couplet, in this particular video, says, “Even if Modi, Modi’s father or Modi’s father’s father comes [to halt the movement], we won’t get scared.”  The uprising created by the farmers’ stir has proven to be quite large and deep-rooted among masses in Punjab.

“I want to tell Modi that we are marrying our children with limited guests because of the movement. I spared only three days for my son’s wedding. But we did it nevertheless. We married off my son with farmers’ flags. I want to tell him that from now on, all our ceremonies will have sangharsh (struggle) in it, it will have flags in it,” said Gurmeet Kaur at Baras, raising her henna coloured hands. At Baras, The Wire met around 20 women who had gathered at Gurpreet, the in-charge’s house. Their determination to win ‘the battle’ was reflected clearly in their fiery sound bytes. None of them is ready to take ‘no’ as an answer from the government on the farm bills.

“We have taken care of everything here, we take care of our homes, go to the nearby morcha daily, work on the farms as well. We cook collectively on one big tawa (griddle) and chulha (stove). If any of my sisters are not able to cook or buy home supplies, we coordinate and deliver it to each other,’ one woman said.

The participation of women in this movement can be put on a slightly higher footing than men. They have allocated equal attention to the movement and household work, including raising their children.

The anger regarding the farm bills in Punjab has been projected mainly on three people – Modi, Adani and Ambani. The challenge of the Delhi morcha, and other strikes, is directly for them. Women, men and children call the trio out in a single breath. But Avtar Singh Niamian thanked Modi for bringing the new laws and uniting Punjab like never before.

“I want to thank Modi, because he has united everyone in our village. Whatever differences we had have been put aside. Even at Punjab-level, all communities have come together”, he said. “Assi ik hor ik gyarah hogaye (One and One have made Eleven),” he added.

Unlike UP and Haryana, the police and administration in Punjab have not interfered with peaceful protests and mobilisation of farmers since the last three months. The agitation in the state will soon complete four months. To those agitating, only the repeal of the laws may justify the sacrifices they are making and the hard work they are putting in.