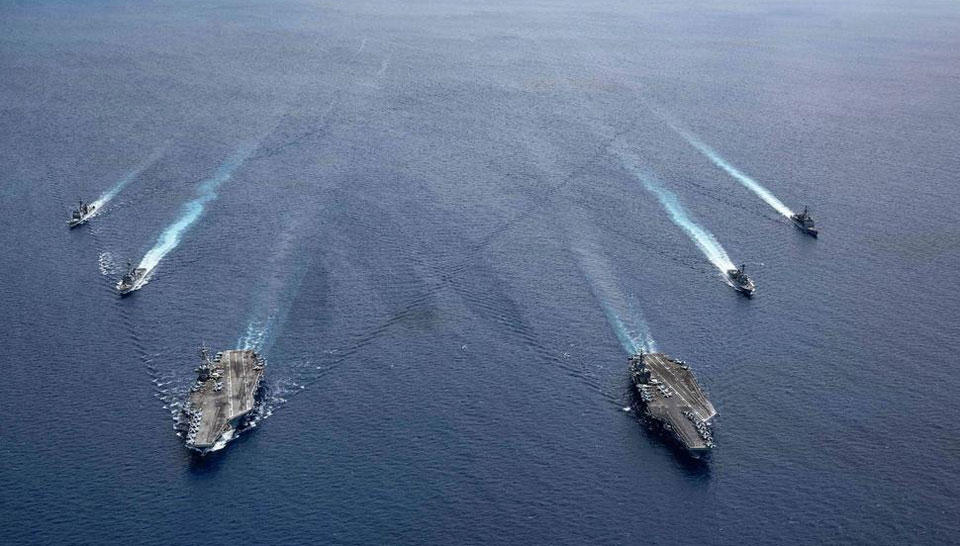 U.S. warships photographed recently in the South China Sea indicate that geopolitical and economic interests are what is behind much of Washington’s anti-China propaganda. | AP

In recent months, Americans have received a barrage of news on TV, social media, and even late-night talk shows discussing the “aggressive” actions of the People’s Republic of China. Whether it’s the disputed waters of the South China Sea, the Hong Kong protests, or accusations of religious discrimination and genocide, the presentations of the national media regarding China are generally negative.

The Trump administration relentlessly slanders the country, as a quick look at Secretary of State Mike Pompeo’s Twitter page will show you. But that should lead to an important question: Why now? All of these stories focused on China are not new, they’ve been off-and-on stories for years. So why the sudden spotlight on them, when so many important things are happening here in the United States and elsewhere around the world?

Americans are still battling the COVID-19 pandemic, and currently, the United States is the epicenter of the virus, with over six million confirmed cases and approaching 200,000 deaths.

At the same time, a massive wave of protests just rocked the nation. These protests are still ongoing in many states. Of course, the violent police crackdown in Portland and other crackdowns around the country will only lead to more future protests, as people demonstrate their outrage at the fascistic tactics of the Trump administration.

And the current period of economic downturn caused by COVID-19 will almost certainly contribute to even more protests, as the American working class feels the squeeze of a capitalist economy in crisis. The ongoing drop in GDP makes a recession almost guaranteed, and even opens the possibility of another great depression.

Despite all this, it seems that often times, controversies on the other side of the planet, namely in China, take up a sizeable amount of the media’s attention. So, let’s examine some of the current media narratives about China, investigate their origins, and then discuss why it is that they dominate so much of the American discourse. Let’s begin with the situation in the Xinjiang province.

The oft-repeated line is that China has “over 1 million Uyghur Muslims in concentration camps” in Xinjiang. This story has been repeated in countless “reliable” news outlets such as Reuters, CNN, Washington Post, and many others.

For the story to be spread so widely, repeated by so many high-ranking government officials and reported by so many major media outlets, surely the evidence of these crimes must be abundant. Yet, upon investigating these claims, they almost all seem to go back to one “study” (that was never peer-reviewed) by a man named Adrian Zenz. In fact, many recent stories on Xinjiang don’t even cite the study, but rather simply take quotes from Adrian Zenz as fact, or they interview him, citing him as an “expert on Xinjiang”. So, who is Adrian Zenz?

A quick look into his background will reveal just how strange it is for this man to be cited so widely as an unquestionable expert. Zenz is a German national whose only real expertise is in evangelical theology, and he currently works at the European School of Culture and Theology. Furthermore, this “China expert” is a staunch anti-communist, who works closely with the Victims of Communism Memorial Foundation, a far-right think tank. He has no real expertise on China, and he never even traveled to Xinjiang to create his “study.”

Another frequently cited source on China-related news is Radio Free Asia, who’ve published many stories about the alleged “concentration camps” in Xinjiang. A quick look into Radio Free Asia shows that they’re funded by the United States government and that they were part of a now well-known CIA propaganda effort. Radio Free Asia and Radio Free Europe were both designed to disseminate U.S. state-sponsored stories with the goal of undermining socialist countries. That function never changed, and today Radio Free Asia is having perhaps the most success it’s ever had since the height of the Cold War, with nearly every major news outlet in the country citing the blatant propaganda magazine almost unquestionably.

On the off chance that you’ve read a story about Uyghurs in Xinjiang that didn’t cite Adrian Zenz or RFA as their source, perhaps they referenced the World Uyghur Congress. This organization, which may appear to be an independent Uyghur advocacy group, in fact, receives its funding from the National Endowment for Democracy (NED), which, in turn, receives money directly from the U.S. government. The NED has a long history of funding any organizations support U.S. interests, working to destabilize “enemies” of the West in the name of “democracy”. In a 1991 interview with then-president of the NED, Allen Weinstein, he admitted; “A lot of what we do today was done covertly 25 years ago by the CIA.”

If an allegation against any nation comes primarily from far-right evangelicals and U.S. government-funded organizations, how can it be taken as impartial evidence? Somehow, for many western capitalist nations, it seems enough with which to condemn China.

It’s important when looking at accusations about how China handles right-wing and religious terrorism to also examine how the U.S. handles these issues. The strategy of the United States has been a strategy of violence. Two  wars have been fought in the broad U.S. “War on Terror.”

The war in Afghanistan has been ongoing for about 19 years, and the Iraq War “ended” in 2011, but the Obama administration redeployed forces in 2014, and this undeclared war has continued ever since. Both countries have been totally devastated, with civilian deaths in the hundreds of thousands and a refugee crisis of millions.

The U.S. is engaged in several other conflicts in the middle east and Africa that aren’t formally declared wars, but bombing campaigns and assassinations are carried out regularly. The U.S. also has a long history of running multiple facilities where Muslim combatants are taken and subjected to brutal torture methods, such as Abu Ghraib and Guantanamo Bay. Despite all this, Muslim extremist groups have grown in many parts of the world, and the so-called War on Terror has been proven to be a failure.

While the United States combats violence with more violence, China has decided to combat it with education and poverty alleviation. Given this context, the United States and its allies have no moral high ground from which to judge China’s efforts at combatting extremism.

Another major point of focus for western “China watchers” is the situation in Hong Kong, where protests and riots have been ongoing since 2019. The protestors in Hong Kong are treated like heroes in western media, with the narrative that they’re attempting to “free Hong Kong” from the “authoritarian” Chinese government.

The meddling hand of the United States reveals itself once again when we look at how the NED funded separatists in Hong Kong, just as they gave funding to the Uyghur separatists mentioned earlier. Leaders of the Hong Kong separatist movement have also met numerous times with Republican politicians like Marco Rubio. Like many other foreign policy allies of the U.S., the Hong Kong separatists have resorted to unnecessary violence on numerous occasions, such as setting a man on fire for disagreeing with them, attacking and tying up a journalist, and setting fire to a building that was going to be used to quarantine coronavirus patients. Yet, because they serve U.S. interests, the overwhelming narrative in the media is that the protestors are the good guys.

Now let’s briefly take a look at the South China Sea. Allegations abound in the U.S. media about China’s “aggressive” actions in these waters. It’s frequently mentioned that China claims certain parts of the sea that are also claimed by other countries, such as Japan, Vietnam, and the Philippines. Simply put, these waters have a long history of being disputed, and China’s current territorial claims pre-date the current Communist government.

The disputed water is being treated by the U.S., UK, and others as though China is making new claims and attempting to steal territory when in reality, they’re just having the same disputes that they’ve had for roughly a century or more.

These disputes should be decided between China and it’s neighboring countries, not by the U.S. or any other nation that has no long-standing territorial claims there. But instead, under the pretense of protecting “free trade” in the South China Sea, the U.S. and its allies are sending warships to threaten the People’s Republic of China. Imagine the outrage if China had warships conducting military drills right off the coast of the United States.

Now that we can see the unreliable origins of these media narratives and understand their hypocrisy, it’s important to ask, why are they saying these things about China? And why now? One simple answer is that the U.S. has a capitalist economy in decline, and the failed response to the coronavirus pandemic has only worsened that decline. Meanwhile, China’s socialist economy continues to grow. Their share of the global economy is expected to pass up the United States by 2025. This reality is one major reason for the uptick in anti-China propaganda.

All three narratives that we looked at earlier play a role in undermining China economically. Xinjiang is the province of China that connects it to the Middle East and much of Asia, so naturally, it’s a key province for China’s Belt and Road Initiative (BRI), a massive project that involves infrastructure buildup and trade.

For the U.S., spreading propaganda and supporting separatists in Xinjiang would help disrupt the BRI, dealing a massive blow to China’s economy. The same applies to Hong Kong, which is a massive trading center for China. The South China Sea is also essential to China’s trading networks, with 39.5% of China’s total trade passing through these waters. Spreading propaganda against these specific regions, sanctioning them, destabilizing them, and urging the western capitalist allies to assist is a clear strategy of undermining China’s growing economy.

As the capitalism of the United States continues to decay, the media vitriol against the PRC will only worsen. As the propaganda efforts intensify, it is the responsibility of progressive Americans, partisans of peace, or anyone skeptical of these narratives to explain their origins, debunk them, and urge the American people to avoid the mistakes of the past, before we enter another disastrous war.

This article, like all op-eds published by People’s World, reflects the opinions of its author.