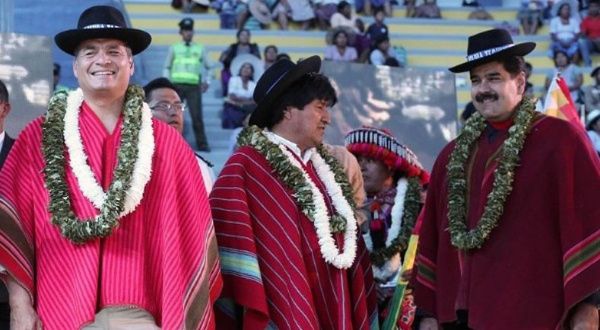 The reaction from the Venezuelan head of state came following the news of the Bolivian Supreme Court upholding a ruling stopping Morales from standing as a candidate for Senate elections on October 18. The former Bolivian president and his Movement Towards Socialism (MAS) party were overthrown in a coup d’Etat in November 2019.

“Brother Evo! Fascists know you are backed by the majority of the Bolivian people, this is why they forbid your nomination to the Senate,” Maduro wrote on social media.

Likewise, Ecuador’s National Court of Justice issued a ruling blocking Ex-President Correa’s from running as candidate to the vice presidency of his country on the ticket with Andres Arauz. Correa was convicted in absentia to an eight-year sentence in a corruption case involving Brazilian multinational Odebrecht. The former president and his supporters have denounced the trial as politically motivated.

Maduro backed Correa on Twitter, writing that “the traitors fear the will of the Ecuadorian people.” Elections in Ecuador are set for February 7, 2021 to choose the president, vice president and 137 National Assembly members.

The solidarity statements came on the heels of the launch of the Simon Bolívar Institute for Peace and Solidarity among the Peoples. During the inaugural ceremony, Arreaza read a manifesto expressing concern for the violation of political rights of people by the Latin American right.

The unveiling of the institute coincided with the 205th anniversary of Simon Bolivar’s Jamaica Charter, with a videoconference featuring more than 100 international participants.

Venezuela’s Vice Minister for North America Carlos Ron was appointed president of the institute, which will be housed at the Foreign Ministry in Caracas.

One of the objectives of the organization is to coordinate the many movements, organizations, personalities and leaders around the world that have stood in solidarity with Venezuela and rejected US sanctions.

Musician Roger Waters was amongst the politicians, artists, intellectuals and activists who welcomed the initiative, stating that all the peoples of the world, without distinction of color, religion or nationality, need it “to help lead us all from this darkness to the light.”

Similarly, Argentinian intellectual Atilio Boron greeted the installation of the Simon Bolivar International Institute and manifested it comes at a very suitable moment when the United States has “redoubled its brutal offensive against the peoples of Latin America.”

Edited and with additional reporting by Ricardo Vaz from Mérida.