Overall, the world biodiversity scenario is not good. According to a new report, animal populations have declined by such a staggering amount, that only an overhaul of the world’s economic systems could possibly reverse the damage.

Nearly 21,000 monitored populations of mammals, fish, birds, reptiles and amphibians, encompassing almost 4,400 species around the world, have declined an average of 68% between 1970 and 2016, according to the World Wildlife Fund’s Living Planet Report 2020. Species in Latin America and the Caribbean, as well as global freshwater habitats, were disproportionately impacted, declining, on average, 94% and 84%, respectively.

Every two years, the World Wildlife Fund (WWF) releases its landmark report, revealing how far species populations have declined since 1970 — an important marker for the overall health of ecosystems.  END_OF_DOCUMENT_TOKEN_TO_BE_REPLACED

Political violence is now almost daily news in the U.S. the violence is an aspect of capitalist/imperialist politics.

Patrick Symmes, Contributor, Yahoo News, wrote on September 9, 2020 (“What Portland and Kenosha say about the return of political violence in America”):

“Political violence is easy to start, and nearly impossible to stop. A single incident isn’t enough to launch a cycle of democratic decay, although the recent killings in Kenosha (rightist shoots leftists) and Portland (leftist shoots rightist) should have everyone in America concerned. END_OF_DOCUMENT_TOKEN_TO_BE_REPLACED

Possibility of Series of Pandemics: Scientists are Looking at Climate Crisis

COVID-19 may only be the beginning of global pandemics – a future scenario in which climate crisis may also play a role.

“We have entered a pandemic era,” said a recent study in the journal Cell. Written by Dr. Anthony Fauci and medical historian Dr. David Morens, both of the National Institute of Allergy and Infectious Diseases, the study paints a picture of a future where pandemics become more numerous.

“I don’t have a crystal ball, but what we are seeing looks very much like an acceleration of pandemics,” Morens told BuzzFeed News.  END_OF_DOCUMENT_TOKEN_TO_BE_REPLACED

Several Killed as Protests Against Police Killing Rage On in Colombia 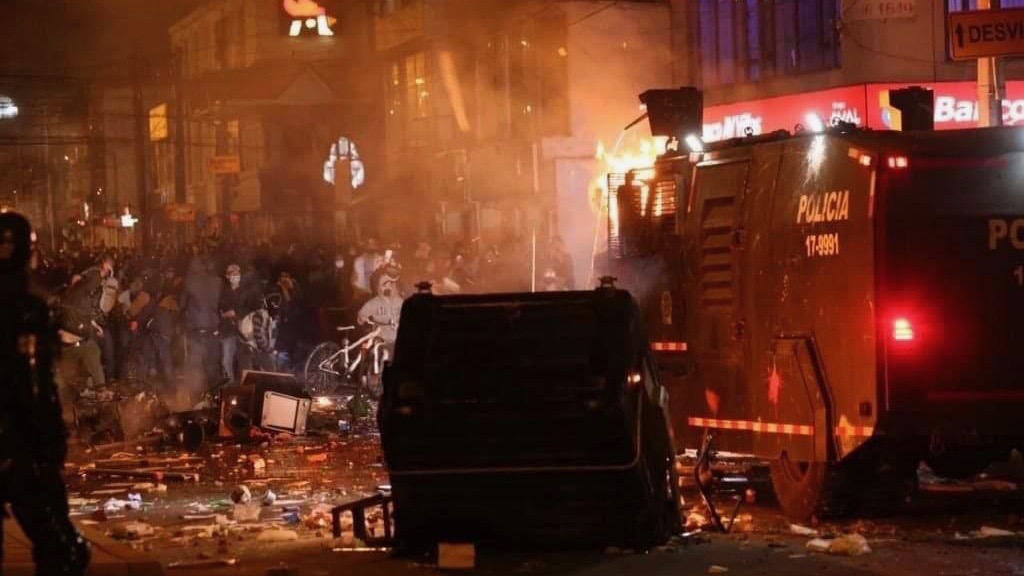 Police have violently repression protests across the city of Bogotá in response to the murder of Javier Ordóñez. Photo: Twitter

Bogotá is in flames following the murder of 46-year-old Javier Ordóñez by police officers early on September 9, Colombian Human Rights Day. The incident was recorded by Ordóñez’s friends and shared widely on social media, leading to a strong backlash from the public. By the afternoon of September 9, people across Bogotá and other cities were on the streets protesting the latest instance of state violence and brutality.

In neighborhoods across the country, people marched to the local police posts and participated in cacerolazos, banging pots and pans and raising chants against the police and demanding justice. According to reports from the Human Rights Foundation PASOS, in several locations across the city, the National Police shot indiscriminately with firearms at protesters. They also reported that police attacked human rights defenders and tampered with their electronic devices. END_OF_DOCUMENT_TOKEN_TO_BE_REPLACED

The South China Sea is basically China’s export waterway to Africa and to Europe (among other markets), but in order for China’s enemy (aspiring conqueror), America, to harm and weaken China maximally, and to use the United Nations assisting in that aggression, America and its allies have cast this vital trade-waterway as being instead basically just an area to be exploited for oil and gas, and minerals, and fishing. The American Government’s aggression — its effort to strangulate China’s international commerce — thus becomes ignored by the U.N., which is consequently handling the entire issue under its law which pertains to a nation’s (China’s) rights to exploit the natural resources of and under a given waterway. END_OF_DOCUMENT_TOKEN_TO_BE_REPLACED

On 2 September, 2020, the US sanctioned two officials of the International Criminal Court (ICC) for investigating into alleged war crimes by US forces and the Central Intelligence Agency (CIA) in Afghanistan since 2003.The officials are ICC prosecutor Fatou Bensouda, and the ICC’s head of Jurisdiction, Complementary, and Cooperation Division, Phakiso Mochochok (sanctioned for having materially assisted Prosecutor Bensouda). Announcing this decision, Secretary of State Michael Pompeo said, “the United States is taking action to protect Americans from unjust and illegitimate investigation by the International Criminal Court (ICC), which threatens our sovereignty and poses a danger to the United States and our allies…The ICC’s recklessness has forced us to this point, and the ICC cannot be allowed to follow through with its politically-driven targeting of U.S. personnel.”

The sanctions have racially targeted the two African individuals among the five officials in the ICC’s Office of the Prosecutor (OTP). Despite possible links to the Afghanistan investigation on account of their judicial positions, the US has chosen not to sanction Director of the Investigations Division Michel de Smedt, Deputy Prosecutor James Stewart, and Director of the Prosecutions Division Fabricio Guariglia. END_OF_DOCUMENT_TOKEN_TO_BE_REPLACED

Prof. Richard Wolff argues that the system in the US is falling apart. Capitalism is surviving because of all the support provided by the American government to corporations — who are receiving the bulk — and to Americans. END_OF_DOCUMENT_TOKEN_TO_BE_REPLACED

A Marxist Theory of Inflation

Marx opposed both these mainstream theories. The quantity theory of money was opposed by Marx for two reasons: 1) money is endogenous, created by banks etc, not by state fiat; 2) overall, money represents value in commodity production and is not independent of it. END_OF_DOCUMENT_TOKEN_TO_BE_REPLACED

There are numerous, competing theories that inform the study of development economics. We will examine three major theories. The approach will be eclectic in the sense that each theory will be examined in terms of its insights into the development process as well as its major weaknesses. END_OF_DOCUMENT_TOKEN_TO_BE_REPLACED

Chile To Remember Allende and Victims of Pinochet Dictatorship

Human rights defenders Friday will hold a procession in Santiago to honor late President Salvador Allende and all those killed during the coup that happened on September 11, 1973.