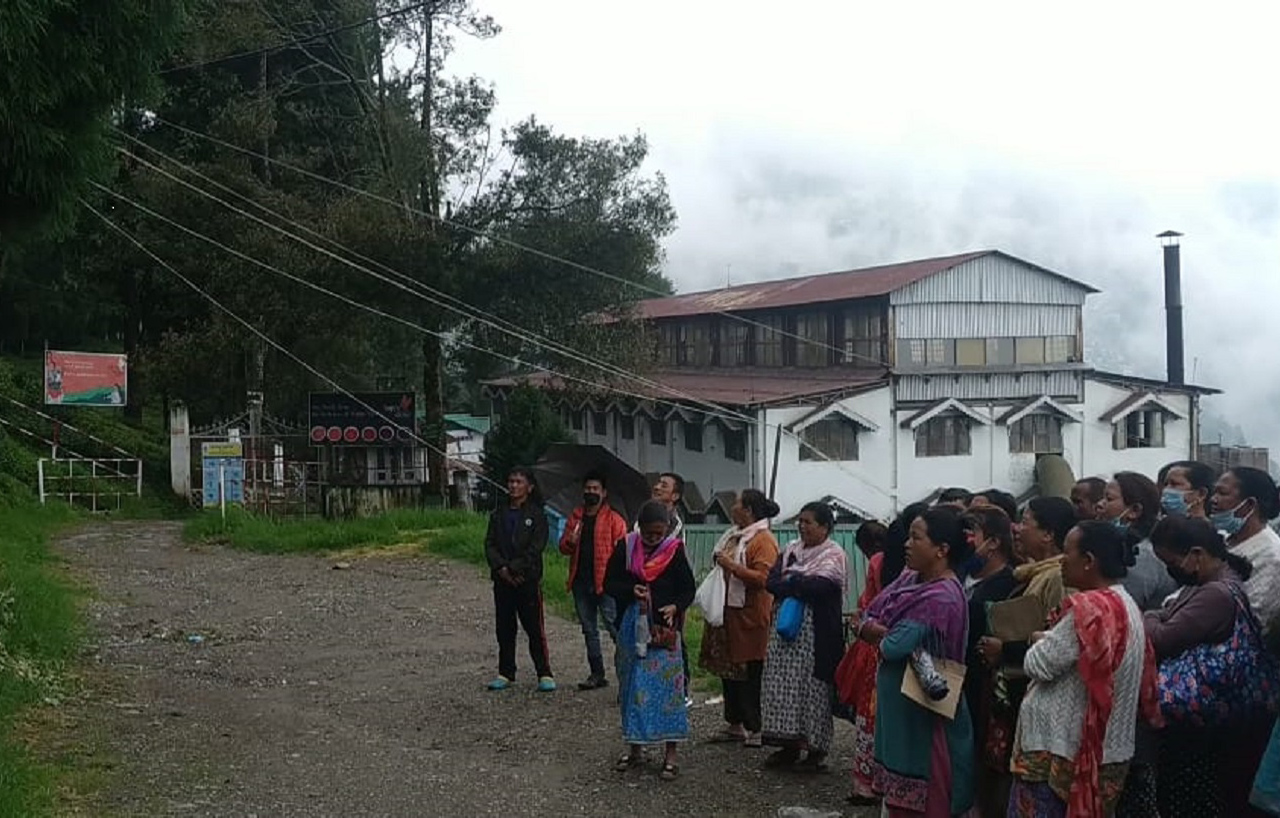 Happy Valley Tea Estate is a small tea estate, just near the main town of Darjeeling. It was first established in 1854 by David Wilson, and later in 1929, when Mr Tarapada Banerjee from Hooghly bought it and merged it with another adjacent tea-garden, he named it Happy Valley tea estate. Since then, it has changed multiple hands and is currently owned by Mr Sanjay Bansal.

During this trying times of the pandemic, when a state of paranoia and fear is looming large globally, and the spectre of death is almost always upon us, tea-gardens from Darjeeling, Terai and Dooars area were ordered to resume ‘operations limited to spraying and irrigation’, with not more than five persons in a squad, while maintaining ‘social distancing and proper hygiene practices’. This order was issued by the West Bengal TMC government on 28/03/2020 (memo no – 58-CS/2020). However, with increasing pressure from tea garden owners and it’s  organisations lobbying for resuming full production, during the advent of ‘first flush’, the state government issued another order dated 11/04/2020 (memo no- 77-CS/2020), to resume’ operations including plucking with up to 25% workforce,’ while maintaining ‘strict health protocols of social distancing and proper hygiene practices’.

This gave a green signal to the tea garden owners of Darjeeling-Terai and Dooars to exploit the value of ‘first flush’ of green tea, which, indeed, happens to be the most famous and expensive Darjeeling tea. Soon after, a certain kind of hesitation, as well as compulsion began to haunt the tea workers of North Bengal. The workers hesitated to work in groups, as the mode of tea production and plucking demands, because COVID-19 infections were slowly picking up pace within the region. Especially, with the mass homecoming of migrant workers from Covid hotspots and the absence of a proper public health system in Darjeeling, the situation can worsen for sure. So, the workers’ apprehension was not baseless. On the other hand, as these workers had no other source of income and livelihood, they were compelled to work even if it meant risking their lives. The global pandemic of COVID-19 has made the very “survival” for the working class into intense precarity, bringing onto forth a plethora of issues, including mass unemployment and retrenchment. The tea workers of North Bengal are not an exception to this.

Strike in the time of Corona:  Happy Valley sparks a rebellion

On June 27, after the deadline for payment of due wages on part of Mr Sanjay Bansal passed, the workers of Happy Valley tea estate decided to go on a strike against the management. They demanded that their wages be paid immediately, including wages for more than three fortnights, provident funds and gratuity for the retired workers. There are 256 workers in Happy Valley tea estate alone and it must be mentioned that Mr Sanjay Bansal owns a total of 14 tea gardens in Darjeeling.  These tea gardens include Cedars T.E , Rungmook T.E , Pandam T.E , Chongthong T.E , Rangeyrung T.E , Happy valley T.E , Mundakothee T.E , Sivitar T.E , Nagari T.E , Ambootia T.E , Narbung T.E , Sipaidhura T.E , Monteviot T.E , and Maalutar T.E. It is worth mentioning here that Rungmook Cedars Tea Estate, Pandam Tea Estate and Rangeyroon Tea Estate were recently acquired by the group under the banner of Darjeeling Organic Tea Estates Private Limited, which was formed by Mr Bansal with a motive of reviving the closed and sick tea gardens of Darjeeling.

In all of these tea gardens, according to the workers, a total amount of 23 crores 9 lakhs 32 thousand nine hundred and 68 rupees (Rs. 23,09,32,968) of Provident Fund and Gratuity that is due to the workers remain unpaid till date. This is a huge amount, in addition to the unpaid daily wages for more than three fortnights. Looking at this unfathomable scenario, what other choice did the workers have, than to protest against such barbaric exploitation? The bubble of workers discontentment, therefore, exploded in Happy Valley tea estate at around the same time, and the workers, as we know, had declared a strike.

The strike continued till July 2, 2020, and the workers met with the Assistant Labour Commissioner of Darjeeling ‘, who suggested’ that the workers ‘call off the strike’ and start working while the concerned authorities ‘look over the matter.’ This is precisely the irony of the system that we live in. Seldom are the instances when the state machinery has acted in the interests of the worker, more so, when it comes to the political and economic struggles of tea garden workers.

But this is just the tip of the iceberg, and the problem when dug deep, reveals political opportunism of many shades. To summarize, the tea garden workers of tea plantations have been subjected to extreme forms of ignorance both before the independence of India was attained in 1947, and thereafter. As a result of this blatant ignorance, the entire region has remained, economically and politically backward. The histories of the tea garden production and its economic relations, thus, are filled with such political, economic and social morbidity and every cup of tea boiling from the tea-leaves from these tea plantations, reeks of blood and sweat of the workers who pluck those tea leaves in extreme conditions of cold, rain and poverty. This is a form of backward capitalism which perpetuates relations of colonial oppression with the aid of the tyrant global capital.

After the meeting with ALC Darjeeling, the workers of Happy Valley tea estate decided to resume work hoping their wages and dues would now be paid, but as a form of continued protest, dispatch of packaged tea was still blocked and the workers were firm in this decision. Surprisingly, on July 14, 2020, a meeting took place between the management team of Mr Bansal, the District magistrate of Darjeeling (S Poonambalam), and a particular fraction of DTDPLU (Darjeeling-Terai-Dooars Plantation Labour Union). It should be noted that this trade union fraction belongs to Gorkha Janmukti Morcha (Binay Tamang Faction).

It was unanimously decided in the said meeting, that the dispatch of tea from the gardens be allowed, and Mr Bansal gave an assurance that the unpaid wages of the workers in all of his tea gardens would be paid by August 4, 2020.  Interestingly, according to the workers of the Happy Valley Tea Estate, due wages are slowly being reimbursed, but PF and gratuity dues are nowhere to be released till now.

There are quite a few questions here. First of all, instead of pressuring Mr Bansal to pay the workers their rightful dues earned through blood and sweat, why is the state government of West Bengal relentless in putting pressure upon the workers to stop fighting against such exploitation? Last year, too, when the tea workers of Darjeeling staged a mass protest against non-payment of demanded 20% festival bonus for September – October 2019, many workers and trade union local leaders were witch-hunted and charges were filed against them. Needless to say, crushing the workers’ resistance has been a popular strategy for the owners – state machinery nexus.

In the past as well as the present, tea gardens have been the issue of ‘vote politics’ between the BJP and TMC alliance parties, regionally and nationally, but never have the workers benefited from this ‘parliamentary political’ fiasco. Till date, the workers of the tea plantations do not have parjapatta (land documents) of their homes, even though parjapatta has been the burning issue in almost all the Bidhan Sabha and Lok Sabha elections.

Secondly, the question arises as to why only DTDPLU was invited for the tripartite meeting on July 14, 2020. It must be mentioned here that a conglomerate umbrella platform of almost 23 trade unions in Darjeeling, Terai and Dooars called Joint Forum, has been active in tea plantation workers’ representations since 2014. There can be differences of opinions in the political role of this forum, but however it must be accepted that collective representation is the way forward for workers’ resistance and the Joint Forum is the only body of tea workers’ collective political representation in the region. So, the question is, why was Joint Forum bypassed for this tripartite meeting? The dubious and clandestine way in which only DTDPLU participated in the said meeting, is totally undemocratic and therefore unacceptable.

One of the workers from Happy Valley Tea Estate said to me over the phone, “We are just pawns and vote banks to the state, as well as to the central government. When will they even consider us as humans”, and a deep silence lingered over the phone. Meanwhile, as usual, a number of parliamentary politicians have started to use the very issue to gain substantial vote propaganda in Darjeeling. The situation is so oppressive that just mentioning the aforementioned worker’s name here, in this essay, can put him/her at great risk.

The workers of Happy Valley Tea Estate can only hope for justice, and from lessons in history, what they have learnt is, they can trust nothing (and no one) other than the working class resistance and solidarity. The workers have to realize that their strength lies not in one ‘supreme leader’ or a ‘party’, but in themselves. For this political realization to take shape, organized and collective struggle is the only way forward for workers of the tea industry in West Bengal. Let us remember, in this context, Maya Angelou and her excerpt from her poem “Still I Rise”:

You may write me down in history

With your bitter, twisted lies,

You may trod me in the very dirt

Sumendra Tamang is a social and cultural activist from Darjeeling.