There is much self-congratulatory back-slapping among governments, the World Bank officials and many economists about the “decline in poverty” that is supposed to have occurred between 1990 and the onset of the recent pandemic. This decline is claimed on the basis of an International Poverty Line (IPL) of $ 1.90 a day (at 2011 Purchasing Power Parity) worked out by the Bank, which basically defines poverty across the world as lack of access over one day to the bundle of goods that $1.90 would have bought in the U.S. in 2011.

How ridiculously low this figure is can be gauged from two facts. In 2011 in the U.S. $1.90  would have just sufficed to buy a cup of coffee and nothing more. In India the equivalent of $1.90 in 2011, while Rs. 95 at the nominal exchange rate, would have been only Rs.29 at the PPP exchange rate, which would have barely purchased two bottles of drinking water. END_OF_DOCUMENT_TOKEN_TO_BE_REPLACED

END_OF_DOCUMENT_TOKEN_TO_BE_REPLACED 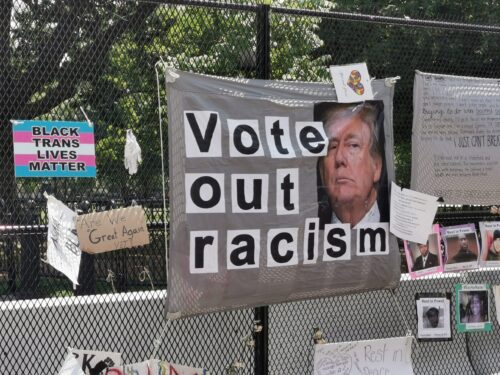 Americans are angry. I suspected they would be, but I got confirmation that they are, all over the place: in Miami, Washington D.C., Baltimore, Minneapolis, New York, and Boston. Basically, everywhere I went, while “taking pulse and temperature” of this country where I used to live, cumulatively, for more than a decade, I felt frustration and bewilderment.

“What is your job?” Shouted an African-American lady, right in the middle of the Union Station in the nation’s capital. Obviously, it was a rhetorical question, as she almost immediately answered her own query: “There are no jobs!” END_OF_DOCUMENT_TOKEN_TO_BE_REPLACED

The rich become that way because they work hard to provide the everyday things that our nation needs. So runs the story that underpins the economic system we live under. It’s something that is so taken for granted, it often goes uncommented upon. It seems as natural and obvious as sun in summer or chocolate fish tasting like chocolate rather than fish. Other times you will see the corporate media actively propagating this idea somewhere in the business section of your paper. By the way, that’s the bit you often skip over to get to the crossword at the back, in case you weren’t sure what that was. Overall, it feels like there’s not much to be said about it, right? Wrong.

END_OF_DOCUMENT_TOKEN_TO_BE_REPLACED The Jeffrey Epstein saga continues to rumble on. Earlier this month, the deceased sexual predator’s longtime associate Ghislaine Maxwell was arrested and charged with luring and grooming children into his sex ring. Epstein, who died in prison in suspicious circumstances last August, was connected to huge swaths of the global elite, counting billionaire business owners, hotshot lawyers and professors, members of the royal family, and foreign leaders among his closest acquaintances.

Perhaps the two most important and notable, however, given their enormous influence, are former President Bill Clinton and current President, Donald Trump. Clinton, already infamous for the numerous women accusing him of sexual misconduct (including rape), is known to have flown all around the world with Epstein on his private jet, the Lolita Express, which he used to ferry girls to his private Caribbean island where he allegedly imprisoned and raped them. Locals report seeing the former president there.

END_OF_DOCUMENT_TOKEN_TO_BE_REPLACED

Common Dreams, a liberal-left website, reposted an article by David Smilde of the Washington Office on Latin America (WOLA): “Joe Biden Should Not Try to Out-Hawk Trump on Venezuela.” It starts off well with the subtitle: “The first task for a Biden administration would be to take military intervention off the table.” The US has no business invading Venezuela. But Smilde’s approach is that the military option is ill-advised because there are more efficient ways of removing the Maduro government.

Smilde criticizes the US unilateral sanctions as “doing more harm than good,” something of an understatement, and later says “sanctions pinch the Maduro government, they bludgeon the Venezuelan people.” This rings of hypocrisy, as WOLA has str­­ongly defended these sanctions. In fact, Common Dreams has twice published open letters (here and here) criticizing Smilde and WOLA for not opposing Washington’s regime change effort in Venezuela. END_OF_DOCUMENT_TOKEN_TO_BE_REPLACED

On July 2nd 2020 British Judge Nigel Teare, with regard to a Central Bank of Venezuela litigation for 31 tons of gold entrusted to the Bank of England to be returned to the Venezuelan state, issued a verdict in favour of ‘interim president” Juan Guaidó.

The real Venezuelan government has proposed that the gold was given to the United Nations Development Programme (UNDP) to be administered so it was used to purchase food, medicine and vital health inputs. Such a guarantee has not been demanded of Mr Guaidó. END_OF_DOCUMENT_TOKEN_TO_BE_REPLACED

On July 8, Wednesday, the research community in France under the leadership of Faculties and Labs in Struggle protested against the controversial LPPR (Pluriannual Research Programming Law) bill and the ‘Welcome to France’ program introduced by the government with the aim to privatize and commercialize higher education and research institutes in France. Protests took place in Paris, Lyon, Nice, and Montpellier. END_OF_DOCUMENT_TOKEN_TO_BE_REPLACED

The Human Rights Commission of Pakistan (HRCP) noted that the COVID-19 crisis has led to further erosion of trust among the people towards the country’s political institutions. In its latest fact-finding report released on July 19, the HRCP said that “the structural imbalances of Pakistan’s polity, manifested in the primacy of unelected institutions, became crystallized in a crisis of this proportion.”

“The government’s overall response has been marred by inconsistent messaging at the top, which must be rectified by ensuring that the federal and provincial governments present a united front in this time of crisis,” the HRCP report added.

END_OF_DOCUMENT_TOKEN_TO_BE_REPLACED

This year marks 25 years since Ernest Mandel died. Mandel (5 April 1923 – 20 July 1995)  was one of the most significant Marxist economists of the second half of the twentieth century. In 1982, he was central to founding our Institute. A prolific scholar and activist until the end of his life, Mandel wrote dozens of books and hundreds of articles.

In his intellectual and political work, Mandel’s Marxism was simultaneously ‘orthodox’ and ‘open’. He was an orthodox Marxist in the sense he defined in a 1983 article; ‘one who ‘acts’ in the spirit of Marx’ and is ‘bound by the obligation to resist all inhuman social conditions’.i His Marxism was open in the sense that Mandel described in a conversation with German radical Johannes Agnoli, it was ‘a task of continuing development, of incorporating new facts and new scientific considerations’; ‘it is part of the essential nature of Marxism to examine significant empirical changes’.ii