Once again the media focuses on salacious details rather than the big picture.

While TV and newspapers have focused on the whiff of corruption surrounding the government’s $900 million contract with the WE Charity, some broader points have been ignored. Whatever the Trudeau and Morneau families have pocketed from WE, the deleterious impact that NGO has had on social services and young Canadians’ understanding of global inequities is much more significant.

In a series of poignant tweets Simon Black highlighted how WE has directed young people towards ineffective political actions and a narrow understanding of doing good in the world. He noted, “teaching kids that ‘breaking the cycle of poverty’ (WE’s words) involves travelling to a ‘developing’ country to build a school and not marching on the IMF, World Bank, White House or Parliament Hill to demand the cancellation of global South debts. That’s the real #WEscam.” In fact, a little discussed reason the federal government funds NGOs is to co-opt internationalist minded young people into aligning with Canadian foreign policy. END_OF_DOCUMENT_TOKEN_TO_BE_REPLACED 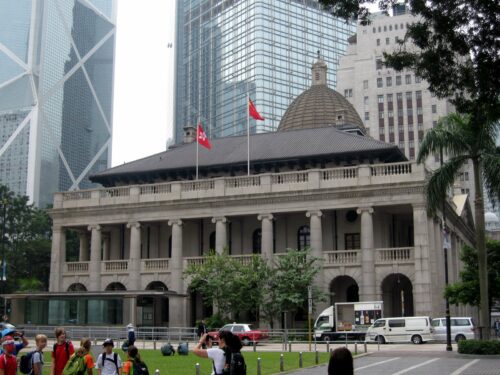 Three years ago, I visited Old Supreme Court Building in Hong Kong, also known as The Court of Final Appeal, together with my friend, an Afghan-British lawyer, who was on a personal mission of ‘re-discovering Asia.’

Coming from a prominent, highly educated family in Afghanistan, my friend was extremely well aware that both the United States and the United Kingdom thoroughly destroyed her country during the recent occupation. In fact, under the NATO boots, Afghanistan became the poorest country in Asia, with the lowest life expectancy. END_OF_DOCUMENT_TOKEN_TO_BE_REPLACED

David Harvey is a university professor and a geographer who describes himself as a Marxist. His series of video lectures on Capital have been viewed by hundreds of thousands as a new generation of young people became interested in Marxism in the wake of the 2008 crisis. For these reasons, his recent statement that he is against the revolutionary overthrow of capitalism has logically caused a stir.

There are many critical remarks that could be made of Harvey’s ideas. For instance, there are many flaws to his theory of “accumulation by dispossession” both from a theoretical point of view but also in its practical conclusions. His lectures on Capital are generally a decent, basic introduction, but they also contain some serious mistakes. In this article however, I will concentrate only on his most recent comments against revolution because I don’t think he’s put this view forward in such a clear-cut way, and also because his comments illustrate a problem common to academics and also reformists. END_OF_DOCUMENT_TOKEN_TO_BE_REPLACED

What happens when three strongmen deny science, prioritize profits and put their populations at risk? The people of their countries suffer. Today the United States, Brazil and India are global leaders in case counts and daily new numbers of cases, and their respective death tolls continue to soar. The xenophobic and hateful discourses of these leaders have served to polarize their respective countries, weakening the response to the pandemic. One has to only look at their neighbors and other global examples to understand that only the model that puts people above profits, that trusts science and values international collaboration, is capable of confronting this threat to humanity.

END_OF_DOCUMENT_TOKEN_TO_BE_REPLACED

The Workers’ Party leader highlights the dangers of Brazil’s submission to U.S. interests.

END_OF_DOCUMENT_TOKEN_TO_BE_REPLACED

This image — the closest ever taken of the Sun — shows the corona teeming with thousands of miniature solar flares, which scientists have dubbed campfires. The pictures are the first released from the Solar Orbiter mission, led by the European Space Agency.

“When the first images came in, my first thought was this is not possible, it can’t be that good,” David Berghmans, principal investigator for the orbiter’s Extreme Ultraviolet Imager instrument, told a press briefing on 16 July. “It was much better than we dared to hope for.”

END_OF_DOCUMENT_TOKEN_TO_BE_REPLACED

Vietnam has been lauded as an emerging COVID-19 success story with the country reporting low case counts and no coronavirus-related deaths during the country’s outbreak. This Outbreak Thursday, we are going to take a closer look at the country’s response in order to better understand its success in controlling its epidemic as well as how the country plans to maintain that control in the future.

Vietnam’s first cases of COVID-19 were reported on January 23 – a son and his father who had visited from China. As of today, Vietnam has a had a total of 369 confirmed cases and no deaths according to the COVID-19 dashboard by the Center for Systems Science and Engineering at Johns Hopkins University. These low numbers are particularly impressive as the country has a large population as well as limited income and resources compared to other countries suffering; Vietnam has a population of 97 million people and is considered a low-middle income country with limited healthcare capacity compared to other countries in the region. The country has also had no community transmission in the last three months – all new cases have been importations. 90% of all cases thus far have successfully recovered. END_OF_DOCUMENT_TOKEN_TO_BE_REPLACED

Models suggest that, in California and New York, SARS-CoV-2 might have begun circulating as early as December 2019. Infections spread across the country from late January to early March but were largely undetected. Researchers analysed air traffic, commuting patterns and other data to understand how and when the coronavirus took hold.

This article is a preprint and has not been peer-reviewed [what does this mean?]. It reports new medical research that has yet to be evaluated and so should not be used to guide clinical practice.

We use a global metapopulation transmission model to study the establishment of sustained and undetected community transmission of the COVID-19 epidemic in the United States. The model is calibrated on international case importations from mainland China and takes into account travel restrictions to and from international destinations. We estimate widespread community transmission of SARS-CoV-2 in February, 2020. Modeling results indicate international travel as the key driver of the introduction of SARS-CoV-2 in the West and East Coast metropolitan areas that could have been seeded as early as late-December, 2019. For most of the continental states the largest contribution of imported infections arrived through domestic travel flows. END_OF_DOCUMENT_TOKEN_TO_BE_REPLACED