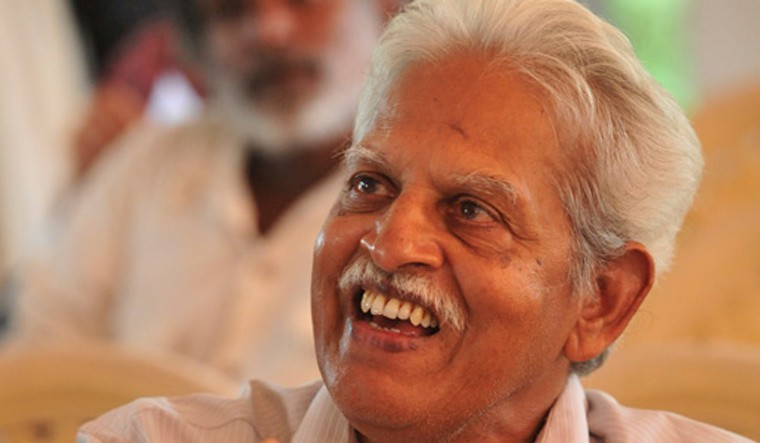 Vara Vara Rao is a nationally renowned Telugu poet and intellectual who has been incarcerated since August, 2018 in the Bhima Koregaon case. He is considered one of the best critics in Telugu literature and has taught Telugu literature to undergraduate and graduate students for about 40 years. He founded Srujana (creation), a forum for modern literature in Telugu in 1966, which was a quarterly and successfully converted into a monthly and continued till 1992. 15 poetry collections of his own have been published, besides a number of poetry anthologies which he edited.

He has been a critic of various governments and has been amongst the leading dissenters of the country. In 1973, the Andhra Pradesh Government arrested him under MISA, which arrest was struck down by the Andhra Pradesh High Court within a month and half of his detention. Stung by this, the Andhra Pradesh Government arrested him after a few months in what became known as Secunderabad conspiracy case, on the ground that his poetry had led to violence and he was released on bail in April, 1975. (He was eventually acquitted from this case in 1989). Again immediately after Emergency was declared, on 26th June, 1975 he was arrested under MISA and was released only after the Janata Party came to power. He was active during the subsequent period in mobilisation of the marginalized against atrocities and was even physically attacked on many occasions. He was also implicated in various cases by the Telugu Desam Party, after they came to power, but never convicted. Again in 2005 he was arrested and finally released after about 8 months on 31st March, 2006 after many cases against him were quashed.

Varavara Rao was arrested in August, 2018 by the Pune police in the Bhima Koregaon case on the allegation of being a Maoist under the draconian UAPA and various sections of Indian Penal Code. Other co-accused in the same case which is considered to be a withc hunt against prominent dissenters from the human rights movement, are civil rights activists such as Anand Teltumbde, Gautam Navlakha and Sudha Bharadwaj, a national office bearer of PUCL. The case appears to be very thin with hardly any evidence against him as also other rights activists. On 24th January, 2020 the case was taken over by NIA and while earlier he was in Pune Jail, he has been in Taloja prison since 29th February, 2020.

However, this statement is being issued in the present context of serious life threatening health condition of Varavara Rao. Varavara Rao who is 80 years old, has been suffering from various ailments including piles, prostate enlargement, coronary artery disease, oedema, hypertension and vertigo. His health deteriorated towards the end of May, 2020 and he was kept in Taloja jail hospital. On 28th May, 2020 his health took a turn for the worse and he fainted. He was transferred from Taloja Jail to JJ Hospital in Mumbai and it appears that as his bail application was coming up, within 3 days he was transferred back to Taloja Jail without any marked improvement in his health. Since then he has been kept in Taloja Hospital. It is well known that facilities in prison hospitals are very elementary and are especially thin during COVID times.

On 11th July, 2020 when a call was made to his family, Varavara Rao went into a delirium and hallucination. It is learnt that in view of his serious ailment, Varavara Rao has been kept with a companion, a co accused in the jail, who informed the family members that Varavara Rao has been hallucinating regularly, has not even been able to walk or go to the toilet or brush his teeth without assistance and required immediate expert medical help – for neurological issues and not just physical issues. Such treatment is not possible in the jail. It is clear that the last 22 months spent by him in jail has worsened his health, with the process itself turning into a punishment.

It is obvious that the State is determined to let popular dissenters die in jail, as is happening with Prof. Sai Baba, Akhil Gogoi and now Varavara Rao.

We would like to stress that Varavara Rao is an undertrial and is not convicted of any offence. The Supreme Court has in several cases laid down that even convicted persons are entitled to the best of health care in jail. Especially in the present COVID times it is all the more necessary that adequate medical care and precaution be taken. The Bombay High Court in recent Judgment in a case filed by the PUCL concerning COVID time situation of the prisons, emphasized the need to take adequate precautions by the jail authorities.

PUCL also hopes that the courts will take notice of his serious medical condition, advanced age and co-morbidities that put him at additional risk, and release him on bail.