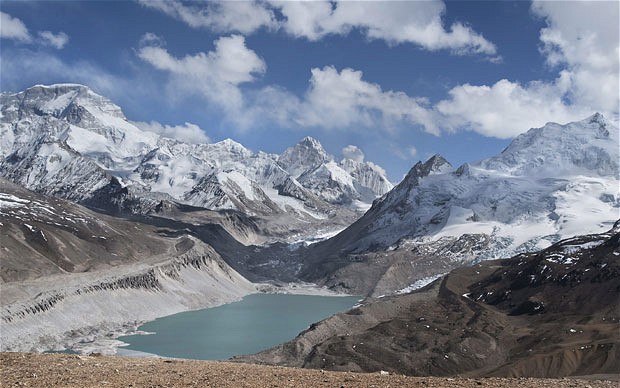 Hexagon, a US spy program in the 1970s-’80s, launched 20 satellites to photograph secretly our world including the Himalayas. The US Geological Survey digitized the images after declassification in 2011 for scientists.

Scientists compared the photographs with recent spacecraft data from NASA and Jaxa, the Japanese space agency. Thus, they found the changes in the glaciers.

The scientists have found that melting in the region has doubled over the last 40 years. Since 2000, glaciers’ heights have been shrinking by an average of 0.5m per year. The scientists say that climate change is the main cause.

Led by Josh Maurer, graduate student of Columbia University, the researchers checked 650 large glaciers in the Himalayas spanning 2,000km. Other researchers are J. M. Schaefer, S. Rupper and A. Corley.

The scientists found that between 1975 and 2000, an average of 4bn tons of ice was being lost each year. But, between 2000 and 2016, the glaciers melted approximately twice as fast, losing about 8bn tons of ice each year on average.

The losses varied by region. But, the trends were broadly consistent across the entire region the scientists examined.

The Hindu Kush Himalaya Assessment: Mountains, Climate Change, Sustainability and People(Philippus Wester, Arabinda Mishra, Aditi Mukherji and Arun Bhakta Shrestha (ed.)) report projected that even in the best-case scenario the Himalayas are very likely to lose a-third of its total ice by the end of the century. The best-case scenario is: A world with carbon-neutral level by 2050 by rapid decarburizing, and limiting global warming to 1.5 degrees Celsius. The report, published in February 2019, is by the International Centre for Integrated Mountain Development, Kathmandu, Nepal.

For a poverty- and inequality-ridden region with a population of about 1.6 billion, this loss of glaciers will be catastrophic as the vast region below the Himalayas depends on rivers fed by the glacier meltwater during the summer.

The glaciers are also a major source of fresh water for ecosystems in the region; and millions of people depend on these ecosystems. The glaciers supply around 800 million people with water for irrigation, hydropower and drinking. They would face difficulties in many areas of life and economy including agriculture.