Socialism is the rational alternative to the disaster that is capitalism. Its basic premise is that production and distribution should be organised to satisfy human need. Already we have the resources, the technology and the infrastructure required to provide every human with the necessities of life and more. So in one sense, socialism is the simple call for a rationally organised society.

END_OF_DOCUMENT_TOKEN_TO_BE_REPLACED

Translated: for marxists.org by Mitch Abidor

To the French people:

In the painful and terrible conflict that again threatens Paris with the horrors of a siege and bombardment; that causes French blood to flow, sparing neither our brothers, our wives nor our children; crushed beneath cannonballs and rifle shot, it is necessary that public opinion not be divided, that the national conscience be troubled. END_OF_DOCUMENT_TOKEN_TO_BE_REPLACED

May 1871: The statue of Napoleon I was pulled down along with the Vendome Column on which it stood in a ceremony during the reign of the Paris Commune. Bearded painter Gustave Courbet is ninth from the right. (Photograph by Hulton Archive/Getty Images)

The Paris Commune fell bloodily at the hands of French troops on 28 May 1871. A prototype social republic ushered in by the proletariat and citizens from other classes of the city, the Commune lasted 72 days, from its birth on 18 March until its brutal demise.

Two days after the Communards were massacred and captured, Karl Marx read The Civil War in France to the General Council of the First International (also known as the International Working Men’s Association). It was the last of Marx’s political pamphlets, supplemented later by Friedrich Engels for publication in 1891. Significantly, Marx accorded the Commune the status of the first historical occurrence – albeit brief – of effective government by the proletariat. END_OF_DOCUMENT_TOKEN_TO_BE_REPLACED

END_OF_DOCUMENT_TOKEN_TO_BE_REPLACED 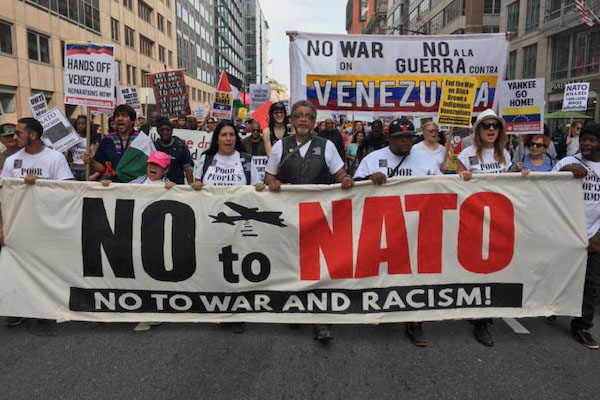 The history of empires amply demonstrates that in their phase of decline they become more violent and bloodthirsty, and that their leaders tend to be coarser and more brutal. Not only their leaders, as Donald Trump clearly demonstrates. Also its environment of advisors reflects similar devolution, becoming something similar to what Harold Laski, referring to the leaders of European fascism, called “outlaw elites”.(2) One need not refer to the prophet Moses and the Tables of the Law to conclude that vicious characters such as John Bolton, Elliot Abrams, Mike Pompeo, Juan Cruz, Marco Rubio and the director of the CIA, Gina Haspel, are a gang of thugs who, as a product of the accelerated moral and political decomposition of the empire, move through the offices of the White House when a maximum-security prison in the Nevada desert would be the appropriate place to pursue their interests. Not one statesman or intellectual among them is capable of offering a realistic and sophisticated view of contemporary reality. Not one of them would withstand ten minutes of debate with Vladimir Putin or Sergey Lavrov, or even with Xi Jiping, because they would be intellectually destroyed in a devastating way. END_OF_DOCUMENT_TOKEN_TO_BE_REPLACED

U.S.-Mexico border is now-a-days a much discussed area. With this background, report on a Texas city has been highlighted in a media report.

The “Why closing the U.S.-Mexico border would be ‘catastrophic’ for this Texas city” headlined USA Today report said: END_OF_DOCUMENT_TOKEN_TO_BE_REPLACED