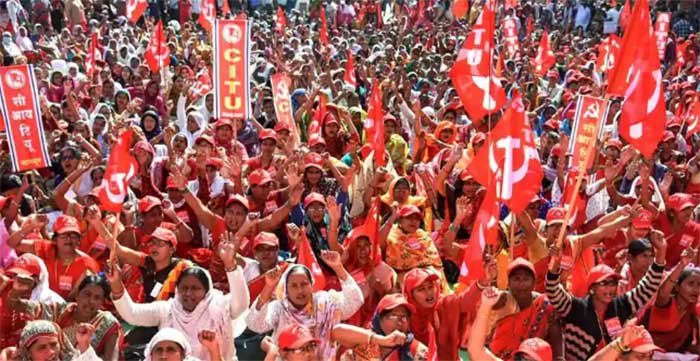 Over 180 million workers began a two-day general strike across India yesterday in protest against Prime Minister Narendra Modi’s big business assault on the working class. Tens of thousands of workers defied threats of sacking and pay cut by state governments to join the national walkout.

The huge strike, which is continuing today, is a powerful indication of the mass opposition to Modi’s Hindu-supremacist Bharatiya Janatha Party (BJP)-led government and its escalating attack on jobs, working conditions and basic democratic rights.

While millions of workers demonstrated their readiness to fight the Modi government, the unions, and the parties that control them, called the walkout to divert the widespread discontent and anger into the election of a Congress party government in the forthcoming April-May national ballot. 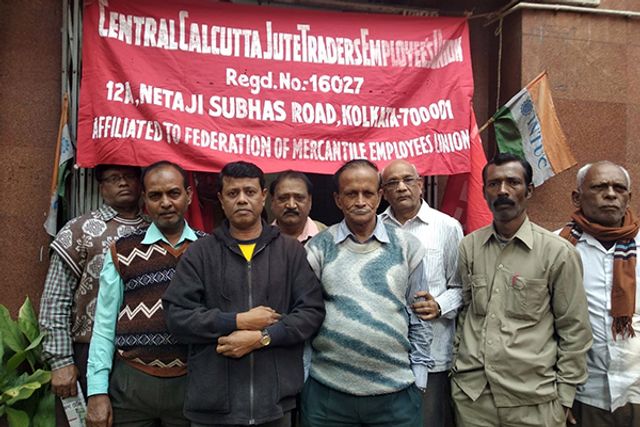 The CITU and AITUC joined forces with the Congress-led Indian National Trade Union Congress and the Labour Progressive Front (LPF), which is affiliated with the right-wing Tamil communalist DMK (Dravida Munnetra Kazhagam), to organise the walkout.

The Stalinists, who provided “left” and “pro-worker” credentials to these bourgeois parties, have no fundamental differences with Modi’s economic measures and are committed to India’s close military-strategic partnership with the US.

According to reports, workers participated in states across the country, including in Haryana and Punjab in the north, Assam, Meghalaya and Manipur in the northeast, West Bengal, Bihar, Odisha and Jharkhand in the east, Tamil Nadu, Kerala and Karnataka in the south, Maharashtra, Rajasthan and Goa in the west, and Chhattisgarh in central India.

The strike had the biggest impact in Kerala, West Bengal, Assam, Karnataka and Odisha with mass protest rallies, marches and road and rail blockades organised in these states. While the strike was only partially observed in Tamil Nadu, there was a total shut down in Coimbatore and Tiruppur, two major cities in that state.

In Kerala, public and private transport came to a halt with state transport, three-wheelers and other taxi services remaining off the road. Central government-owned sectors in the state, including banks, insurance, tax, excise and custom department offices, the Account General’s office and the postal services, were seriously impacted.

In Maharashtra state over 32,000 Mumbai public transport workers began an indefinite strike on the same day to demand higher pay and better working conditions. While the BJP-led state government immediately responded by invoking the draconian Essential Services Maintenance Act no buses left any of the city’s 27 depots.

All contract employees and half the permanent workforce at the Visakhapatnam steel works, also joined the national strike. Visakhapatnam is the largest industrial hub in the southern state of Andhra Pradesh.

The total participation of contract workers in the industrial action was in defiance of sacking threats by the steel work’s management. The use of low-paid contract workers is rampant in the public and private sector in India and used to drive up profits, slash wages and conditions and divide permanent and contract workers against each other. 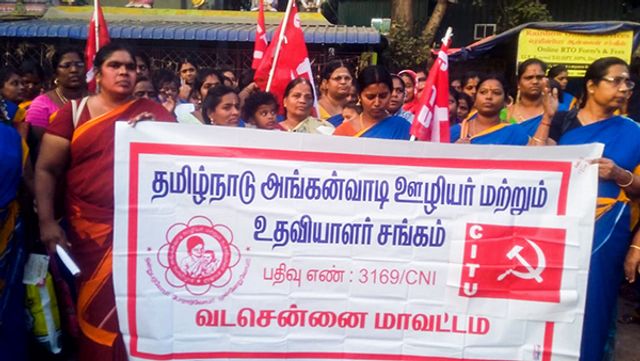 The BJP-led Goa government invoked the Essential Services Maintenance Act to ban strikes in all transport services within the state. Anticipating a total shutdown of all public transport, the Congress party-led Karnataka government shut down all schools and colleges in that state.

While the CITU and the AITUC offered the usual demagogic denunciations of the Modi government, these formations are hostile to any independent political mobilisation of the working class. The Stalinist union federations are also attempting to utilise the general strike to appeal for closer collaboration with the BJP-led central government and employers.

A CITU statement said that the Modi government had “undermined tripartism” and complained that it has not held an “Indian Labour Conference [tripartite body] for more than three and half years.” This was echoed by the AITUC, whose general secretary, Amarjeet Kaur, lamented that “there has been no attempt” on the part of Modi and the BJP “to reach out to the unions.” In CPM-ruled Kerala, the unions exempted tourism workers from the strike, citing the potential financial losses any stoppage in that sector would cause.

This craven appeal by the Stalinists was issued as Banerjee denounced the strike and banned all state government workers from participating. In fact, the ruthless imposition of “free market” reforms by previous CPM-led Left Front governments in West Bengal paved the way for Banerjee’s Trinamool Congress to come to power in 2011.

Indian supporters of the International Committee of the Fourth International distributed Bengali- and Tamil-language versions of a WSWS analysis of the walkout to strikers in Kolkata and Chennai, and discussed the necessity for a socialist internationalist perspective to fight the Modi government’s attacks.

In Chennai, Ramesh Kumar, 55, from Life Insurance Corporation, told the WSWS that “Modi government rule is terrible and poor people are the most affected. The Congress party and BJP are the same.”

A state transport worker criticised the parties and unions that organised the strike. He pointed out that the opposition DMK in Tamil Nadu had previously aligned itself with the BJP and denounced the DMK’s current line-up with Congress as “an opportunist alliance.” He welcomed the necessity of fighting for a workers’ government and noted that “nobody else is talking about this.”

Sathiyaseelan, an Uber cab driver and former member of the CITU denounced all the unions. “The CITU is only looking after its office bearers and doesn’t pay much attention to the grievances of rank and file workers.

“The trade unions are not for workers. When the police began harassing Uber and Ola cab drivers the unions did not come to our defence and so I decided to leave the CITU. There are many workers who do not participate in the strike, mainly because they have no faith in the unions. I like what you say about your international party and your web site and will visit your site.”

An anganwadi (child care) worker said: “I’ve been working as a teacher in this service for 35 years. My monthly salary is 12,500 rupees [$US178] but a helper only gets 7,000 rupees [$100], even with 12 years’ experience. The anganwadi salary was originally just 2,500 rupees but I chose this job with the aim of securing a government job in the future.”

In Kolkata, Santanu Mondal, a member of the National Federation of Postal Employees, said: “As a result of a 2004 ordinance, public sector workers were deprived of a pension scheme. We are against the new contributory pension scheme. The government is not implementing a Supreme Court order on the minimum wage for workers. We demand that every worker should be paid a monthly salary of 18,000 rupees [$257]. There are many contract casual workers in the postal sector but they are only paid a pittance, just 41.75 rupees per hour.”

Sukomal Shad, a member of the Alahabad Bank Workers Union, said: “Irrespective of who comes to power we will continue to fight for our demands, which have been neglected by all previous, successive governments. The future is uncertain but our demands are legitimate.”