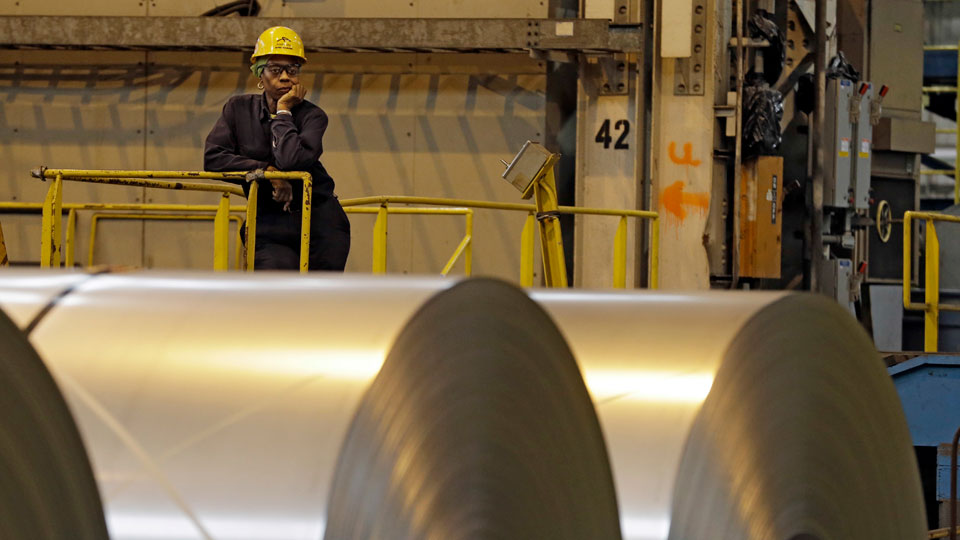 A worker looks on from behind coils of steel at ArcelorMittal Steel’s hot dip galvanizing line in Cuyahoga Heights, Ohio. Trump says his steel and aluminum tariffs will be good for workers in the metal industries. | Mark Duncan / AP

Donald Trump voiced the real concerns of many Americans when he spoke of the need to bring jobs to communities and to end unfair trade deals. By blocking the Trans-Pacific Partnership, pushing a re-negotiation of NAFTA, and increasing tariffs on a range of imports, Trump has appeared to finally take seriously the needs of unemployed and underemployed workers.

Some unions have been calling for tariffs for years, most notably the United Steelworkers. While Obama ran in 2008 on a promise to renegotiate NAFTA, he never did so, and in fact became a relentless proponent of expanding “free trade.” END_OF_DOCUMENT_TOKEN_TO_BE_REPLACED

ANTI-FRACKING protesters declared their fight had “just got serious” today as they staged a “lock-on” in response to the start of drilling at its site near Blackpool by energy firm Cuadrilla.

Police closed off Preston New Road this morning as dozens of protesters gathered at the site prior to the start of Cuadrilla’s hydraulic fracturing operations. END_OF_DOCUMENT_TOKEN_TO_BE_REPLACED

STRIKING teachers were arrested in Iran today as lessons were halted for the second day of a national strike over pay and for a fully funded education system.

Teachers were reportedly arrested in Mashhad and Saqez as the clerical regime clamped down on dissent, with almost all 35 provinces of Iran joining the strike action. END_OF_DOCUMENT_TOKEN_TO_BE_REPLACED

Ramón Emilio Valdés Amaro is Cuban. Not even the decades he lived far away, first in Sweden and later in Spain, made him less ours, or stopped him from promoting Cuban music. One hundred years since his birth, October 9, 1918, Bebo Valdés is from Cuba. END_OF_DOCUMENT_TOKEN_TO_BE_REPLACED

The extraordinary double standard that exists towards Africa whereby some European countries that have totally flawed and corrupted systems presume to lecture Africans on their systems and assume to take a superior stance is symptomatic of a mind-set that represents a very potent form of passive racism in Europe.

Picture it. The aftermath of a national election, where senior international observer from a leading European country declares of the election process he has just witnessed: “In all the many election observations I have been on, I have not seen anything that comes close to how undemocratic the voting system is”; and then goes on to say “It is just so far beneath anything remotely resembling European election standards, or anything we would allow, even in Eastern Europe.”

END_OF_DOCUMENT_TOKEN_TO_BE_REPLACED

In 1968, as the liberal plans made immediately after Indepen dence seemed well and truly gone, and in the shadow of Naxalbari, Samar Sen founded Frontier, a journal for socialism and democracy.

Samar Sen died in 1987. Timir Basu had already started working at Frontier before that date. After Sen’s death he has kept Frontier going almost singlehandedly. We celebrate Sen and Basu as we celebrate Frontier. END_OF_DOCUMENT_TOKEN_TO_BE_REPLACED

Although the 1967 revolutionary armed peasant uprising in Naxalbari, at the foot of the Indian Himalayas, was brutally crushed, the insurgency gained new life elsewhere in India. In fact, this revolt has turned out to be the world’s longest-running “people’s war,” and Naxalbari has come to stand for the road to revolution in India. What has gone into the making of this protracted Maoist resistance? Bernard D’Mello’s narrative in his new book India after Naxalbari: Unfinished History (New York: Monthly Review Press; Delhi: Aakar Books) answers this question by tracing the circumstances that gave rise to India’s “1968” decade of revolutionary humanism and those that led to the triumph of the “1989” era of appallingly unequal growth condoned by Hindutva-nationalism, the Indian variant of Nazism.
What follows is an excerpt from the end of chapter 10, “History, Memory, and Dreams—Reimagining ‘New Democracy'”] END_OF_DOCUMENT_TOKEN_TO_BE_REPLACED

Sinclair has largely evaded the kind of public scrutiny given to its more famous competitor, Fox News.

Lauren Hills knew that she wanted to be a news broadcaster in the fourth grade, when a veteran television anchor came to speak at her school’s career day. “Any broadcast journalist will tell you something very similar,” Hills said recently, when I met her. “For a majority of us, we knew at a very young age.” She became a sports editor at her high-school newspaper, in Wellington, Florida, near Palm Beach, and then attended the journalism program at the University of Florida, in Gainesville. Before graduation, she began sending résumé tapes to dozens of TV stations in small markets, hoping for an offer. Hills showed me the list she had used in her search. Written in pen in the margin was a note to herself: “You can do it!!!!”