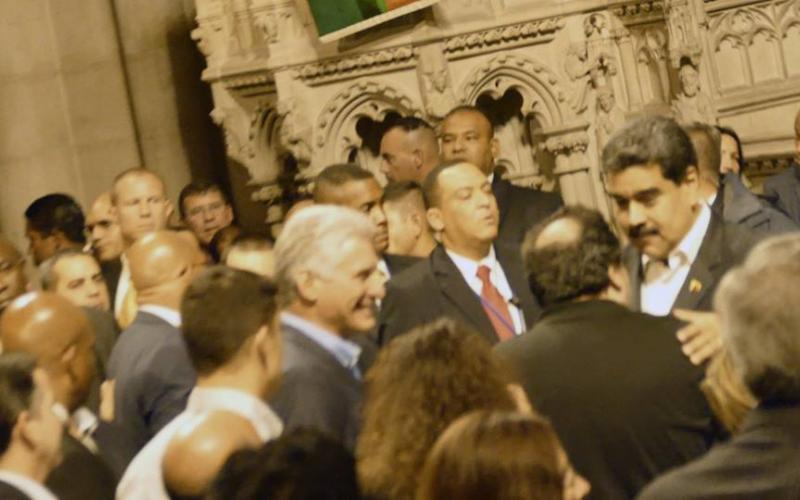 Making his first visit to the United States as head of state, Republic of Cuba President Miguel Diaz-Canal Bermudez addressed over 2,000 people at Riverside Church and delivered an impassioned speech before the 73rd Ordinary Session of the United Nations General Assembly (UNGA) on 26 September.

Defending the sovereignty of Cuba and other states throughout Latin America and the Caribbean, Diaz-Canal emphasised that the nations within the region had a right to adopt the political and economic system of their choice.

The address appeared to be a refutation on the character of the speech given by United States President Donald Trump one day earlier. Trump launched a tirade against Venezuela and Cuba stating that socialism was a failed system.

Nonetheless, the newly-elected Cuban leader recounted the advances of socialism and the specific exploitative character of capitalism. He noted the increasing gap between the rich and poor along with the human deprivation so widespread in the contemporary world where resources are horded by a small group of billionaires squandering precious material wealth on weapons of war and conquest.

Although relations between Cuba and the US were restored on 20 July 2015 after the severing of ties at the aegis of Washington in 1961, the economic blockade against Havana remains intact. Former US President Barack Obama led the initiative to re-establish diplomatic ties, but his predecessor Donald J. Trump has escalated hostile rhetoric towards Cuba.

This diplomatic break in 1961 took place amid numerous attempts by the Central Intelligence Agency to overthrow the revolutionary government then led by Prime Minister and later President Fidel Castro Ruz (1926-2016). Fidel handed over power to his younger brother Commander-in-Chief of the Armed Forces Raul Castro in 2006. He had maintained control of the council of state and ministers until 19 April of this year. Raul remains First Secretary of the Central Committee of the Communist Party of Cuba.

In his address to the UNGA, Diaz-Canal spoke to the international delegations on the character of capitalism and imperialism. He cited statistics saying nearly half of the globe’s wealth is controlled by 0.7 percent of the population while 70 percent of the people can access only 2.7 percent of available resources leaving 3.4 billion impoverished, 815 million without adequate food, 758 million illiterate and 844 million lacking in basic services such as clean drinking water.

He said that: “These realities, Madam President, are not the result of socialism, like the President of the United States said yesterday here. They are the consequence of capitalism, especially imperialism and neoliberalism; of the selfishness and exclusion that is inherent to that system, and of an economic, political, social and cultural paradigm that privileges wealth accumulation in the hands of a few at the cost of the exploitation and dire poverty of the large majorities.”

Drawing attention to the plight of the downtrodden who were the victims of enslavement and national oppression, while in its more developed form the Western exploitative system resulted in ruthless dictatorships and near-apocalyptic world wars, the Cuban President continued noting: “Capitalism consolidated colonialism. It gave birth to fascism, terrorism and apartheid and spread wars and conflicts; the breaches of sovereignty and self-determination of the peoples; repression of workers, minorities, refugees and migrants. Capitalism is the opposite of solidarity and democratic participation. The production and consumption patterns that characterise it, promote plundering, militarism, threats to peace; they generate violations of human rights and are the greatest danger to the ecological balance of the planet and the survival of the human being.”

Later that same evening of 26 September, a large diverse crowd of people gathered at the Historic Riverside Church on the upper west side of Manhattan. The audience lined up for two hours circling the religious institution having to go through stringent security checks to enter the building.

The event was entitled: “Cuba Speaks for Itself”, and was organised by a “welcoming committee” of numerous organisations including the Inter-religious Foundation for Community Organisation / Pastors for Peace, National Jericho Movement, Venceremos Brigade, Communist Workers League, Black Panther Commemoration Committee, the Northeast Political Prisoner Coalition, among other groups. A programme book was circulated with advertisements from some of the groups, which were a part of the welcoming committee.

A joint statement published by the welcoming committee on the first page of the programme book recalled the firm decades-long bonds between progressive forces in the US and the Cuban government, by noting how: “We have been through many struggles together—from the fight to return Elian Gonzalez to his father and his country to the struggle to free the Cuban Five. We fought apartheid South Africa together. We will never forget the decisive part revolutionary Cuba, under Fidel’s internationalist leadership, played in defending the independence of Angola, winning the independence of Namibia, and in the unravelling and defeat of the apartheid state. For these and many other reasons our bonds of solidarity are unbreakable!”

President Diaz-Canal received a standing ovation from the audience when he entered the sanctuary at Riverside Church. The Cuban leader recalled that Fidel had spoken at the same venue in September 2000 where he announced the creation of a scholarship programme for students in the US from oppressed communities to study free-of-charge at the Latin American School of Medicine (ELAM). The project began in earnest in 2005 and has since graduated over 170 students from the US whose only requirement is that they work in underserved areas.

A delegation of ELAM graduates from the US attended the gathering. Two of the graduates, Drs. Sitembile Sales and Joaquim Morante, addressed the audience during the programme.

Only about five minutes after the beginning of the programme, Venezuela President Nicolas Maduro Moros entered the church. The crowd stood and applauded in amazement. Both presidents sat at the front of the sanctuary together.

Maduro in a brief talk at Riverside said he had made a last minute decision to come to New York to participate directly in the 73rd Ordinary Session of the UNGA. Prompted by the speech delivered by President Trump the previous day, Maduro flew to New York where he participated in the UN debate giving a 50-minute address, which defended the right of Venezuela to self-determination and sovereignty.

President Diaz-Canal said during his remarks at Riverside that: “For Maduro, for Venezuela, for the Cuban delegation, it is very emotive to be here with you, friends of Cuba and Venezuela here in New York. Miracles like these happen in this city only here, in the Riverside Church.

Fidel taught us that to cooperate with other exploited and poor peoples was always a political principle of the Revolution and a duty to humanity.”

The leader of the Caribbean socialist state went on to reiterate: “Cuba also owes a lot to international solidarity and to the help of many friends and activists here in the United States, among whom are many Cuban residents. The most recent demonstration of this was the fight for the return of the Five Cuban anti-terrorist fighters and, before that, the return of little Elian to Cuba.”

During his visit to New York, Diaz-Canal also met with members of the US Congress and a group of people representing the agricultural sector. In addition he spoke before the Nelson Mandela Peace Summit held in honour of the centenary of the late African National Congress leader and the first democratically elected president of the Republic of South Africa from 1994-1999.

* Note: The author was a member of the press corps, which covered the visit of Republic of Cuba President Miguel Diaz-Canal Bermudez and Bolivarian Republic of Venezuela President Nicolas Maduro Moros at Riverside Church.