Thousands of protesting farmers from north India, under the banner of the Bhartiya Kisan Union, began the Kisan Kranti Yatra on September 23 from Haridwar. On Tuesday, when they reached the border of Delhi, as was their plan, the police stood in their path with barricades, water cannons, tear gas, and lathis. The farmers had planned to reach Kisan ghat, conclude their protest and hand over their memorandum of demands to representatives of the government.

The police have claimed that it was because the protestors turned violent. “Some protestors resorted to stone pelting and wielded batons causing injuries to police personnel deployed on duty. Under these circumstances, only minimum required force was used to contain these aggressive and violent protestors,” the police said.

The BKU has denied this. “We only insisted that we be allowed to go to Kisan ghat. We had been marching peacefully for the last ten days. Why will we resort to violence now at the last step? We never want any confrontation. Tell me this, we are farmers and we are making some demands of our government. If our government won’t listen to us, where should we go? Should we go to Pakistan or Bangladesh?” Mahendra Singh Tikait’s son Naresh Tikait asked. Tikait is the president of the BKU, and chaudhary (leader) of the Balyan khap, which is influential in western UP.

The police action was widely criticised by the political class, from even within the NDA camp. From the opposition, Mayawati, Akhilesh Yadav, Rahul Gandhi and Arvind Kejriwal issued statements in support of the farmers and criticised the BJP at the Centre for the police action.

Mayawati said, “This is the height of the BJP government’s anarchy and it shall remain prepared to bear its consequences.”

“On International Day of Non-Violence, the BJP’s two-year Gandhi Jayanti celebrations began with the brutal beating of farmers peacefully coming to Delhi. Now, the farmers cannot even air the grievances coming to the capital,” Rahul Gandhi said in a tweet.

A delegation of BJP leaders led by home minister Rajnath Singh met the farmer leaders and assured them that all the demands will be considered. However, the BKU has rejected the government’s assurances. 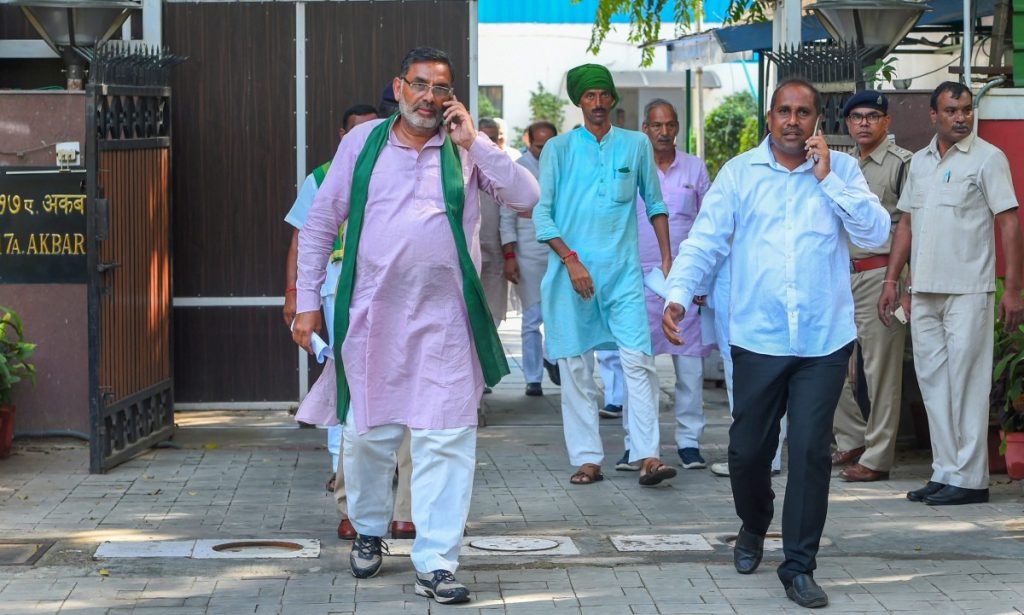 “It is good that they at least spoke to us after ten days. But it is not enough. They have said that our demands will be considered. Farmers have been suffering for so many years and they are still only going to consider our demands. The protest is not going to end,” said Tikait. “We demand that we be allowed to go to Kisan ghat as we had planned. We are only going to go back once that happens.”

For now, the farmers are staying put. Dinner is being cooked using the cooking paraphernalia that they carried with them when they left their villages.

Some of the key demands of the farmers are the same as those of almost all farmer protests across the country in the last year and a half including higher minimum support prices and a complete and unconditional one time complete loan-waiver.