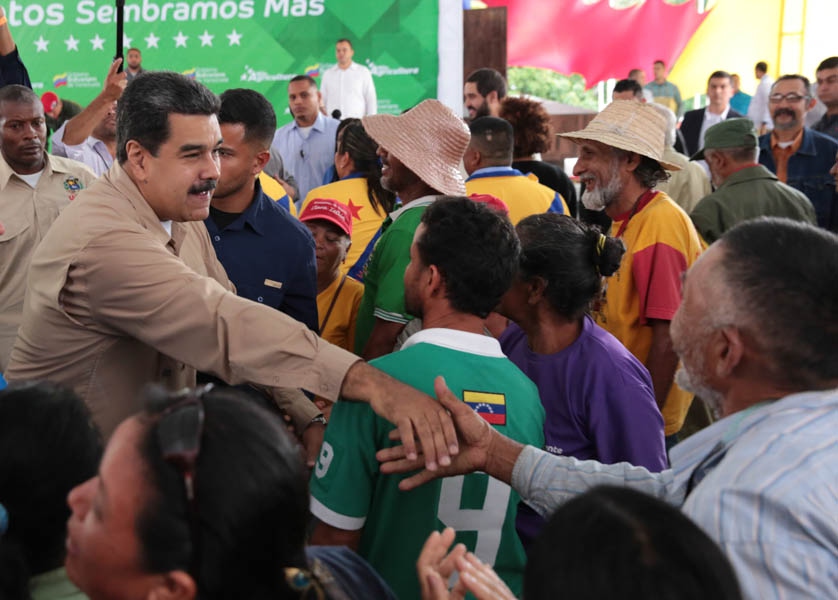 Campesinos finally managed to enter the presidential palace after a 20-day march traversing half the country. (Francisco Batista / Presidential Press)

Scenes of tears and cries of joy dominated the live televised meeting held in Miraflores presidential palace, in which the multitude of small farmers, who had marched 435 kilometres from Guanare, Portuguesa state, were given the opportunity to address the nation and draw the president’s attention to a series of popular grievances, including land evictions, corruption in state bureaucracy, and paramilitary violence.

The meeting with Maduro was cast into doubt Wednesday night when the march arrived in Caracas only to be met by a heavy National Guard picket line just blocks from Miraflores.

The weary marchers, who were accompanied by a significant number of Caracas-based social movements, decided to occupy the street in the rain, before meeting a commission from the National Constituent Assembly (ANC) headed by the body’s president, Diosdado Cabello.

The following day, they received the news that the president – who hadreceived pressure from within his own cabinet to attend the marchers personally – was to meet them.

During the encounter, three campesino leaders voiced the marchers’ demands to the president and the nation in unequivocal terms.

Arbonio Ortega, from Portuguesa state, explained that the anti-imperialist march was “a product of a necessity,” due to what he termed the “reverses” of the Bolivarian Revolution in the countryside. He also stressed that the march demonstrated the power of mobilisation and resistance in the sector.

Amongst the grievances which he outlined was corruption in local state entities, asking, “Why did we receive no support from the [United Socialist Party] government of Portuguesa state (…) why was it so hard for us to get to this point?”

He also underlined the problems of corruption and inefficiency in the wider agrarian sector, claiming, “We have plenty of proof.”

Equally, Nieves Rios, from Zulia state, denounced the violent land evictions currently occuring there, especially in the Catatumbo region. Amid cries of “justice, justice” she also made allegations before the president of corruption in the armed forces which, she claimed, protect “certain interests” and who are “mistreating” the people of the region.

Finally, farmer Jesus Osorio presented the campesinos’ official document of proposals which he handed over to Maduro.

The proposals include the declaration of an agrarian emergency, the intervention and restructuring of the Ministry of Agriculture and all of its sub-bodies – including the National Land Institute and the state-run agricultural corporation Agropatria – an audit into the ministry’s functionaries, and a review of the agrarian courts in order to halt the criminalisation of the land struggle.

In response, Maduro assured the marchers that he was “well informed” of their activities, and applauded the farmers for “waking up the national consciousness of what is going on in the countryside,” describing the initiative as “miraculous.”

Responding to the marchers’ grievances, Maduro called a campesino congress to be held at the end of September.

He also ordered a review of all denunciations made over land which has previously been taken from private large landowners and handed over to communities, campesinos, or public or state bodies.

Likewise, he scheduled a high-level meeting for the following day to address the problems of land evictions, the legal agrarian system – including the appointment and conduct of local agrarian judges – all cases of alleged violence against campesinos, as well as the cases of corruption which the grouping bought to Caracas. He ordered the president of the Supreme Court, the president of the National Constituent Assembly, the attorney general, and his executive vice president to attend the meeting.

At the recent PSUV congress, Maduro took the unprecedented step of publically assuming responsibility for recent economic failings, recognising that “the productive models which we have tried have, so far, failed and the responsibility is mine, is ours.” He made no specific reference to the problems experienced in the countryside. 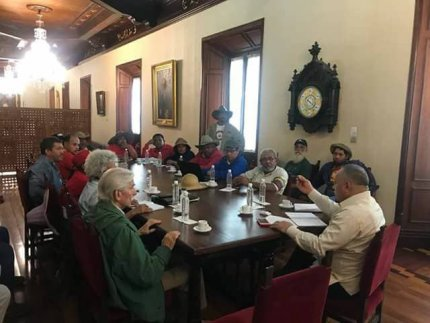 The marchers began walking July 11 numbering approximately forty. They have, though, grown in number along the route as delegations from other rural sectors and communities they have passed through joined their efforts. They now have representation from at least ten states.

“This march has been painted as being opposition-led, financed by powerful people. No, this march isn’t right-wing, its 100% chavista, supporting Maduro, Bolivarian, and the only thing it seeks is for Venezuela to move forward,” declared Elvis Camacaro, a disabled marcher from Portuguesa state who has made the journey on his bicycle.

The marchers have received wide-reaching support, especially from the Communist and Tumpamaro parties and alternative media outlets, as well as elements within the governing United Socialist Party (PSUV).

Analysts have claimed that the march may galvanize a host of popular revolutionary movements which look to pressure the government from a leftist position. This month has also seen protests from pro-government sectors such as the electrical workers’ union and public sector nurses.

The ANC’s Escalona claims that the march “has begun to make history… [and] could mark the beginning of people going back to the streets.”

Equally, the Communist Party, which has supported the march since its beginning, has described it as “heroic” and “an important impulse” to “build a new correlation of revolutionary forces.”

Explaining how the march was financed, Camacaro clarified that “campesinos came out with sacks of beans, lentils, rice, and people on the way have helped up with food and accommodation.”

The 435 Km route of the Admirable Campesino March. (@LuisanaC16)