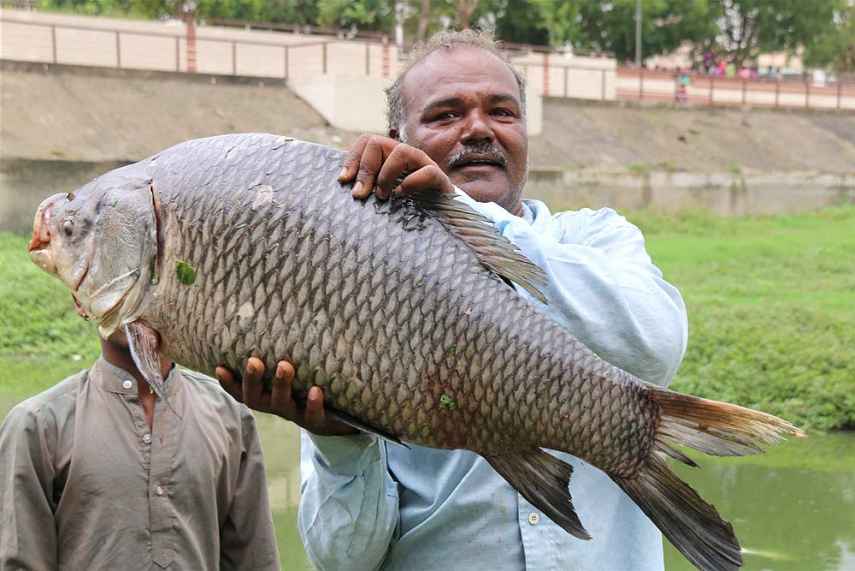 A fisherman holds up a dead catch in Ahmedabad. Credit: PTI files

Ahmedabad: Gujarat has the longest coastline in the country, running into 1,660 kilometres. Its coast is home to 549 villages with a population of more than 30 million. Fishing is the primary source of income for the majority of this population, who are dependent on it either directly or indirectly.

There were once more than 300 species of fish along this coastline owing to the diversity of habitat with salt marshes, mangroves and sea grass.

However, over the past decade, Gujarat’s coastline has seen an onslaught of industrial corridors. Nearly 60% of Gujarat Industrial Development Corporation (GIDC) undertakings are along the coastline, including petrochemicals units, refineries, thermal power plants, cement and rayon factories and ship-breaking industries.

As a result, the habitat of fish has been acutely affected. The coastline of Gujarat now has hardly any catch to offer, forcing fishermen to move deep into the sea.

“The concentration of industries along the corridors, such as chemical factories along Vapi and Ankleshwar (Ankleshwar GIDC) in South Gujarat, petrochemicals along Vadodara, rayon and power plants in Saurashtra and power plants and ports in Kutch have rendered the sea coast highly polluted,” says Bharat Patel, an environmental activist based in Kutch.

“The Gujarat government has been allowing the release of industrial waste water into the sea. The government doesn’t bother to ensure that effluent treatment plants maintain the norm required for release,” says Rohit Prajapati, an environmentalist based in Vadodara.

South Gujarat is the worst affected as Gujarat Industrial Development Corporation (GIDC) in Ankleshwar, Jhagadia and Panoli mostly have chemical and pesticide factories. 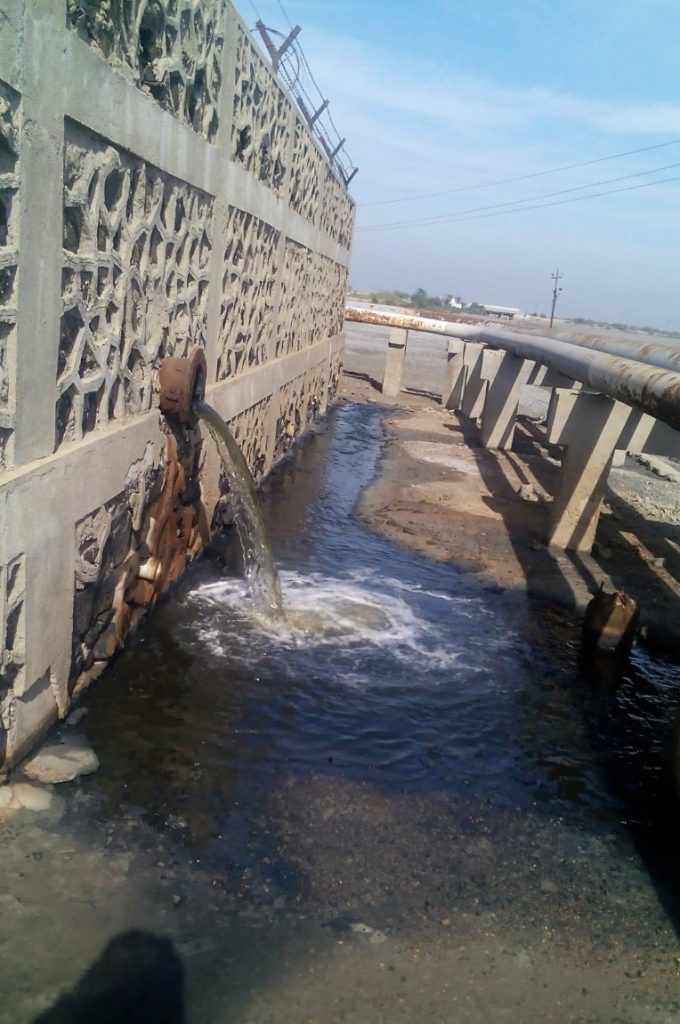 “In South Gujarat, for example, figures show that industries in GIDC of Ankleshwar, Jhagadia and Panoli have not been treating effluents at the Final Effluent Treatment Plant (FEPT). The figures in January this year show average chemical oxygen demand (COD) was 2,532 mg/litre instead of the norm of 1,000 mg/litre,” Prajapati added.

“There are FETP’s set up by government at Vapi, Surat and Ankleshwar for all GIDC’s of South Gujarat but they are equipped to handle 5,000 or 6,000 COD but it is being overloaded by waste water that has about 10,000 COD. Besides these are managed by the industrial association themselves so there is no way to put a check on the right use of these FETPs,” says M.S.H Sheikh, an environmental activist based in Surat.

“As a result of the effluents being dumped into the sea, it is fishermen who are suffering. Small fishermen are the worst hit. In coastal villages of South Gujarat that would once have 80-90 boats, not even 10 are left now, as fishermen are opting for jobs like working in factories as daily wage earners. Women of the community who would be primarily engaged in cleaning and selling fish in local market are now travelling to neighbouring urban areas to work as house maids,” adds Sheikh.

“It is easier and cheaper for the companies to bribe employees of the Gujarat Pollution Control Board (GPCB) and Central Pollution Board than run an effluent treatment plant regularly,” says Bhagvanbhai Solanki, an activist based in Gir Somnath district of Saurashtra.

In Saurashtra, between Bhavnagar and Porbandar, there are cement, rayon and ship-breaking industries. Indian Rayon and Industries Limited in Veraval, Gir Somnath, which is now owned by the Aditya Birla group, and Gujarat Heavy Chemical Limited in Sutrapada, Junagadh are one of the oldest industries in the area. Now soda ash manufacturing units by the Tatas, cement factories by Ambuja and Aditya Birla group and a ship-breaking industry based in Alang, Bhavnagar have also come up.

“The Indian Rayon and Industries Ltd has a pipeline which is 5 km long and disposes untreated effluent into the sea in Veraval. Sutrapada is worst affected. In fact, the waste from Gujarat Heavy Chemical Ltd has affected coasts along neighbouring tehsils like Hirakoth, Dhamlej and Mul Dwarka. Sutrapada is home to about 10,000 small fishermen. The coast along Sutrapada had natural ‘bara’ (an outlet from where boats would go out into the sea without having man-made port or jetty). Those are destroyed and due to regular disposal of waste there is sedimentation along the coast in the tehsil,” says Solanki.

“It isn’t just industry effluent, most coastal cities dump the sewage of the city into the sea,” says Usman Ghani Sherasiya, an activist working amongst the fishermen community in Kutch and Saurashtra.

“In the late 1980s, the boats would go for one-day fishing trips. Fishermen would leave early morning and come back by evening. There was so much fish along the coastline that everyone caught enough. Industries started coming up from early 1990s and have been affecting availability of fish along the coastline. As fish became scanty along the coastline, fishermen sailed further ahead into the sea stretching their trips to two or three days to ten days. Now even after a 20-day trip, there isn’t a guarantee that the boat will return with a good catch,” says Bharat Modi, president of the Shree Porbandar Machimar Boat Association.

Between 2010 and 2013, Tata, Adani and OPG power plants were set up in Kutch. Nearest to the coast is the Adani power plant at Navinar, Mundra. By 2009, prawns that were abundantly available along the coastline of Kutch were all gone. Lobsters were found around the rocky coast along Modhwa in Kutch. Earlier, on any odd day, fishermen of the area would catch nothing less than 25 kilograms of lobsters in a trip. Now even one kilogram per trip isn’t assured.

“Adani ports and SEZ is responsible for large-scale environmental damage such as damaging mangroves, blocking and damaging the creek at various spots thus damaging local ecology at the Mundra project site,” said Sherasiya.

A Rs 200 crore fine imposed on Adani Ports as restoration fund imposed by the UPA government was withdrawn by Environment Ministry in 2016.

In another instance, Paryavaran Suraksha Samiti, an organisation led by Prajapati, had filed a PIL seeking cancellation of authorisation and environmental clearance granted to industries. The Supreme Court in February 2017 passed an order in the matter ordering all state pollution control boards to issue notices to industrial units to make their effluent treatment plants fully operational in three months i.e. by May 2017.

“Nothing has been done in the matter despite the Supreme Court order as of February 2018,” stated Prajapati.

A questionnaire regarding the issue has been sent to Indian Rayon, Adani Power and Tata Power. However, they are yet to respond to the same. The story shall be updated once a response is received.

For fishermen of Gujarat, the profession is getting more and more difficult. As the availability of fish reduces along the coastline, they are forced to venture farther into the sea.

“Prawn, White Pomphret, Dara, Surmai, Chapri, Eel, Palwa and Varara are varieties of fish that were once abundantly available along the coastline between Porbandar and Kutch. These varieties would sell at anything between Rs 300 to Rs 1,500 a kg. Between 1990 and 2000, all these varieties were all gone gradually due to pollution,” says Bharat Modi. 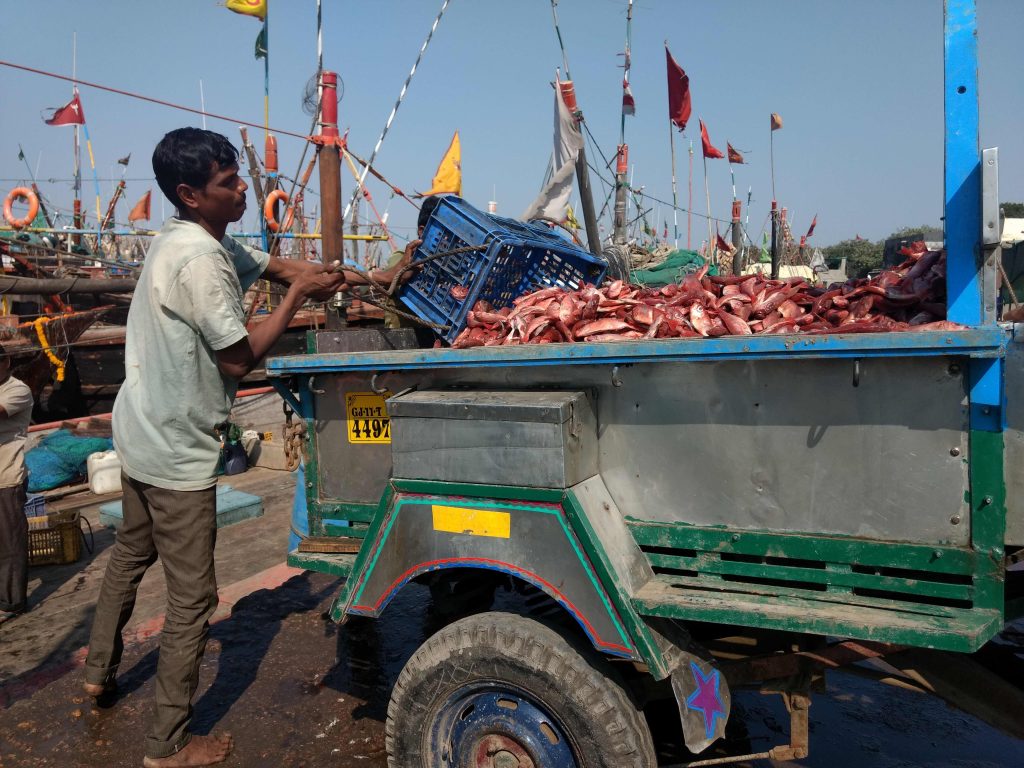 “Earlier in around 3-5 nautical miles, fishermen would get enough catch to sustain, now there is no guarantee of a sustainable catch even in the deep EEZ till 15 -20 nautical miles. The only option remains to venture into Pakistani waters,” says Sheikh.

“It is since 1990, that fishermen began crossing international maritime line for fishing in Pakistan and at times as far as Iran,” says Jivan Jungi, former president of the Shree Porbandar Machimar Boat Association.

A fishing trawler typically costs Rs 50,000 to make and boat owners take out loans to buy one. A fishing trip these days would cost about Rs 1.5 lakh, including payment of the fishermen, captain, ice and diesel. 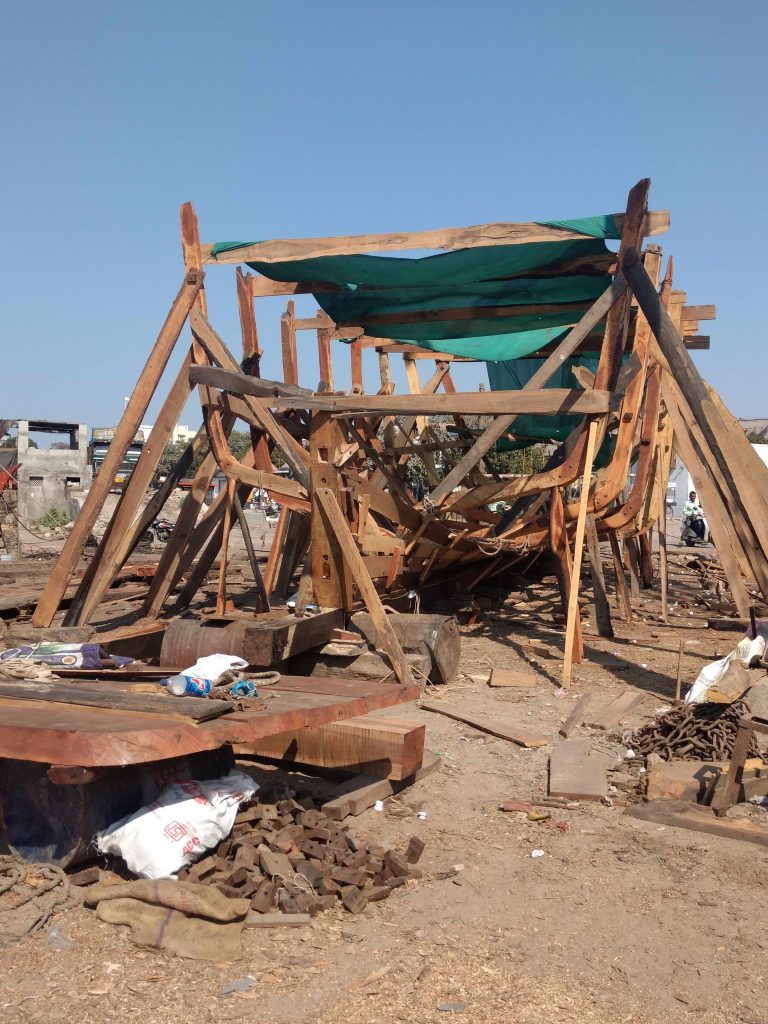 “There is no guarantee that a boat will return with enough fish that will earn a profit for the boat owner. Many a times a trip doesn’t even pay for the expenses incurred. Hence, despite knowing the risk involved, fishermen venture into Pakistani waters,” says Patel.

“When a boat is captured by the Pakistan maritime authorities, the fishermen come back eventually but [Pakistan] keeps the boat. Currently, 1,024 boats are in Pakistan out of which 800 belong to boat owners based in Porbandar. In 2014, 56 boats were given back by Pakistan but all the machinery and parts were taken off them. A boat owner has to pay off the loan he took for a boat he will never get back. Insurance companies refuse to help since their policies are confined to incidents occurring inIndian waters or the high seas but not the territorial sea of Pakistan. There are boat owners who could never recover from the loss. They work in factories to pay off their loans and eventually change professions to sustain their families,” he adds.