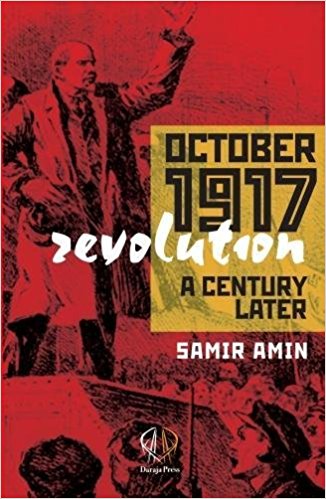 “[R]evolutions are ‘great’ precisely because they…are far ahead of…their time” (36). In the five essays presented inOctober 1917, renowned radical political economist, Samir Amin, pushes far beyond the immediate necessity of emphasizing the historical weight of October, and launches, into an ambitiously broad analysis of the trajectory of twenty first socialism, the Marxism that inspired it, and the lessons that can be drawn for the struggles of the twenty first century.

Amin begins with an essay on the historical trajectory of the Soviet Union. Debunking common myths like the ‘economy of scarcity’, the ‘totalitarian state’, and the ‘expansionist empire builder’, Amin asserts that the collapse of the USSR stemmed, not from any inherent intractability of the historical socialist project, but from successive policy blunders, particularly with respect to the Agrarian Question, and the foreign policy prerogative of creating a multi-polar world order, in which socialism can breathe.

Moreover, Amin duly emphasizes the fact, that the shortcomings of “really-existing socialism” in the USSR, distract, from the gigantic accomplishments of the world’s first worker’s state. The defeat of Nazism, the facilitation of decolonization, the re-writing, not only of capital-labor relations subnationally, but the relationship between centers and peripheries, transnationally. These achievements, Amin reminds us, should not be taken lightly.

Amin’s second essay shifts the focus from past to present, analyzing the contemporary conjuncture in light of his unique, ‘world-historical’, and at times very critical, reading of Marx’s Capital. Some of Marx’s insights, Amin notes, remain more or less directly applicable to the contemporary conjecture. We see ‘primitive accumulation’ in the global land grab, for instance. Crises of realization in the financial crises of 1997, 2008 etc.

However, others require reformulation in light of the (d)evolution of capitalism since the time of Marx. Amin notes for instance, that the disillusion of the USSR, forces us to reconsider Marx’s linear, stagiest formulations, and speak instead of a “long transition”, occurring unevenly and in stages. The globalization of production moreover, as Amin points out, has transformed ‘capital’ from a category representing ‘capitalists’, to “abstract capital”, not rooted in any physical persons or families. These are but a few of the dynamics of contemporary capitalism, revealed by a critical application Marx’s work.

Amin’s fourth essay delineates why, in Amin’s view, the periphery remains the “zone of storms” (964), where the long transition is most likely to find its advances in the twenty first century. He makes his point by process of elimination, demonstrating why anti-systemic ruptures appear unlikely in the centers of the global system.

Amin goes over several of the political-cultural factors militating against anti-systemic rupture in the global north – US communalism, underground Southern European fascism, proxy glory through the US in the case of the UK, to name only a few. However, far more interesting are the world-systemic factors Amin identifies. Germany for instance, is, in Amin’s assessment, unlikely to be the site of anti-systemic rupture because the ongoing “Latin-Americanization” of Eastern Europe, feeds illusions amongst German elites of eventually outcompeting the US for top spot in the collective imperialist triad of the US, Germany, and Japan. Similar dynamics dampen the embers of resistance throughout the global north.

Amin’s fifth essay moves from the global north to the global south,and delineates what he views as the necessary struggle of the twenty first century: dotting thesouth with dozens of sovereign projects, that will create a multipolar world in which anti-capitalists alternatives can breathe, grow and multiply. Sovereign projects, Amin asserts are necessary to break the power of new capitalist imperialism, which has taken on a different face,but which produces the same results as ever, pauperization, dispossession and subordination of the global south, alongside political centralization, bubble economies, and racist ideology in the global north.

Amin notes that sovereign projects do not imply autarky. Rather, they subordinate national developmental trajectories to internal forces, rather than external ones. Trade is allowed, but cannot be imposed, under a sovereign project.

Amin’s final essay, addresses what he sees as the central issue on the agendas of governments in the global south today – the Agrarian Question. The issue is central in Amin’s view because, the productivity gap between northern and southern agriculture, implies that the expansion of the north’s corporate food regime to the south, will necessarily come with mass dispossession, at the same time, mechanization will be reducing the number of available jobs in the cities, ecological crises will be intensify the misery of the poor, resource rent depletion cripple the ability of local oligarchs to buy off dissent. The expansion of capitalist agriculture in other words, is fomenting a serious rupture. Establishing non-private systems of land ownership and combining small scale, family based agrarian renewal with national industrialization, are, according to Amin, vital to ensure that the system falls left, instead of right.

The ambitious breadth of Amin’s book precludes any comprehensive history of the October revolution, and in fact the revolution is discussed little if at all. Neither are there many poetic reflections of a contemplative kind. Amin’s essays are business-like, and to the point. The sight is firmly set, not on reminiscences about the past, but the challenges of the present. No totalizing narrative is presented, and the common thread that binds Amin’s five essays, is rather thin.

Despite these weaknesses, Amin presents, in a compact, straightforward package, everything that someone with a critical disposition and/or a third-worldist point of view, needs to know about the legacy of October. It is a book produced in the fashion of Gramsci’s ‘organic intellectual’, one who synthesizes and renders coherent, the latent ‘common sense’ of ordinary people, people who can smell the sour odor of hypocrisy in news reports about a bloody, terroristic coup in October of 1917, who doubt the death of the dream to create a world of emancipatory reason, who sense the futility in seeking freedom and dignity on an individual basis. In a word, Amin’s book nurses back to health, the latent embers of revolutionary inspiration, that once turned the October sky red in 1917.

Theo V. Kenji is  an aspiring sociologist, and co-founder of the Radical Reading Collective at UC Irvine. I am interested in food sovereignty, ecologically unequal exchange, extractive industries and world systems. Please see my site for more.