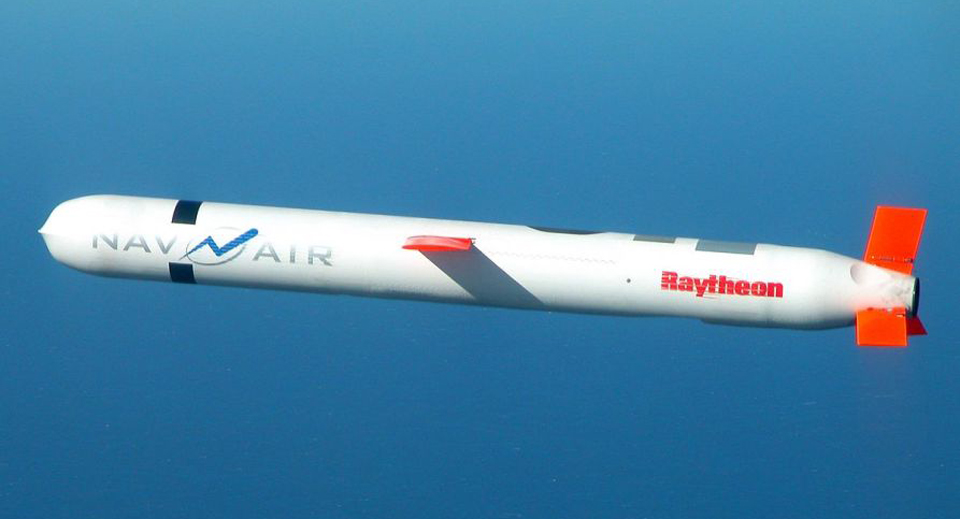 A Tomahawk cruise missile manufactured by Raytheon. At least 118 of the missiles, which cost $1.4 million each, were used in this weekend’s U.S. air strike against Syria. | AP

War, who is it good for? Missile manufacturers, that’s who.

Since President Trump announced that he intended to bomb Syria, the stock values of some of the country’s top weapons manufacturers have soared, adding a collective $10 billion in market capitalization values over the course of just one week. With Trump delivering on his promise this weekend, the rally on Wall Street continues.

A barrage of 118 (or more) U.S. Tomahawk cruise missiles rained down on Syria Friday night—Trump’s punishment for the alleged chemical weapons attack carried out by Bashar al-Assad’s government in Douma (for which the world is still awaiting hard evidence). Trump’s tweet on April 9 that he would be taking action against Syria launched the stock prices of some of America’s major defense suppliers into the skies, and they are still climbing.

For Raytheon (RTN), the company which manufactures the Tomahawk cruise missiles used against Syria, nearly $2.5 billion has been added to the company’s market value. Add together the gains from other top weapons makers Lockheed Martin (LMT), General Dynamics (GD), Boeing (BA), and Northrop Grumman (NOC), and it becomes apparent just how profitable a business war can be.

Lockheed Martin makes the tactical control system, another of the required components of the Tomahawk launch apparatus. General Dynamics, meanwhile, manufactures the missile’s firing system. Boeing builds the B-1 bombers used in the strikes as well as its own variety of cruise missiles, while Northrop Grumman produces radar systems and other bombers, like the B-2 Stealth.

The investor crowd was giddy about the money-making opportunities last week. On the stock tip blog “The Street” on Friday, trader Stephen Guilfoyle was recommending “4 Hot Defense Stocks for Syria,” telling his readers, “The world remains dangerous, and dangerous ‘toys’ are increasingly in demand.”

For the American people, the immediate cost of subsidizing the profits of war was at least $165 million—just for the Tomahawk missiles themselves, which cost the government $1.4 million each. This of course doesn’t account for the tens of millions of dollars or more that it cost to mobilize the equipment and forces necessary to carry out the air strikes.

Even though this round of strikes is being spun as a one-night affair, it is actually part of a sustained campaign in Syria and across the Middle East aimed at protecting U.S. dominance against the growth of Iranian and Russian influence. Almost exactly a year ago, there was a round of air strikes on Syria over another alleged chemical attack, and U.S. troops have been on the ground inside the country since late 2015.

With known war-hawks now holding prominent positions in the cabinet—including John Bolton as National Security Advisor, Mike Pompeo as Secretary of State, and Gina Haspel as head of the CIA—the likelihood that this weekend’s missile strikes were a one-off event are next to nil. All three of these figures were connected with the disastrous war in Iraq under George W. Bush, which was was justified by the need to eliminate Saddam Hussein’s “weapons of mass destruction”—weapons which didn’t actually exist.

Meanwhile, the party on Wall Street carries on, with the promise of even brighter days ahead for defense contractors. Immediately following the bombing, Trump pledged “billions of fully approved dollars” in additional military spending on Saturday morning. Speaking of the U.S. military’s overwhelming power in the world, he continued, saying, “There won’t be anything, or anyone, even close!” That is exactly what this weekend’s air strikes were intended to tell the world.