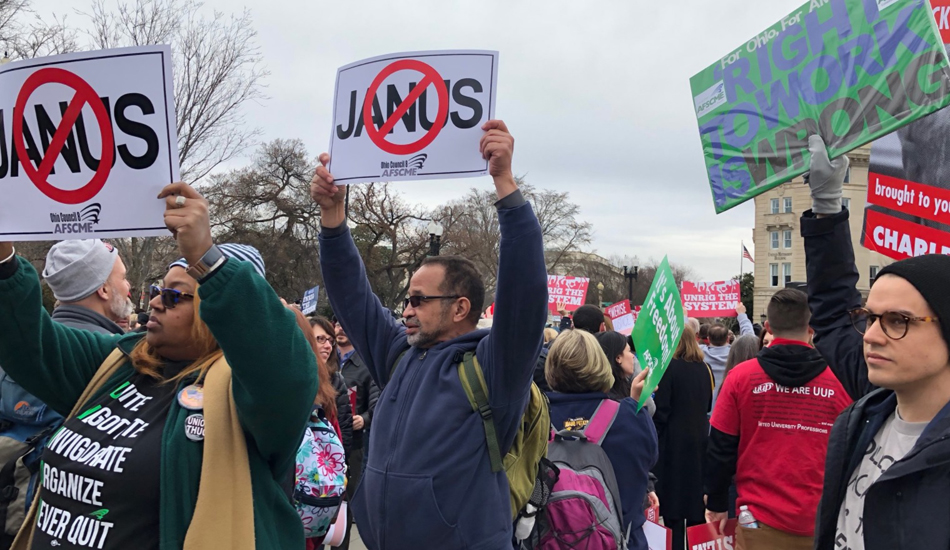 WASHINGTON—Vowing to make this the first day in a long war against corporations and the 1 percent, hundreds of thousands of unionists gathered and marched from coast to coast on a “National Day of Action” on Feb. 24 to campaign for workers’ rights and specifically against a looming threat to them – the U.S. Supreme Court’s Janus case.

From Los Angeles to New York to D.C. to Chicago to Richmond to Philadelphia, workers and their allies declared they would fight against corporate plutocrats and their bought-and-paid-for politicians.

And they pledged to do it together, in organizing drives and at the ballot box. “We will never win without one another,” Mine Workers Secretary-Treasurer Levi Allen said in an interview at the D.C. rally. “We are the union and we won’t take their bullcrap no more,” American Federation of Government Employees President J. David Cox declared from the podium there.

The specific cause that brought thousands into the streets was the High Court case, pushed by the rabid anti-union National Right to Work Committee, its legal defense arm and its corporate backers.

In the case, heard on Feb. 26, the justices will later decide whether every state and local government worker in the U.S.  could become a potential “free rider,” using union services, but not having to pay one red cent for them.

Latest federal calculations of show 6.24 million state and local workers nationwide are union members, while unions represent another 576,000 state and local government employees. Some of the latter group – those in so-called “right to work” states – are free riders.

An anti-union ruling – widely expected – would make all state and local workers, including those who are members now, “free riders.” That could cost unions thousands of members and millions of dollars.

Speakers didn’t stress the legal specifics, though. They warned of the harm an anti-union ruling brings to all workers – and demanded and pledged workers would fight back through organizing and politics.

“We’ll tell the truth about this case,” AFL-CIO Secretary-Treasurer Liz Shuler told the D.C. crowd.  “Their agenda is simple,” she said of the right wingers and their backers, “More power for the big corporations and fewer rights for the rest of us.”

“The full strength of the labor movement is needed to stop the attacks on collective bargaining rights,” the New Jersey AFL-CIO said in posting notices for rallies in Foley Square in New York City and Thomas Paine Plaza in Philadelphia.  “But this is about more than one day of activism. We need to mobilize, organize, and engage every day to stand up for our right to collectively bargain.”

The case, Janus vs AFSCME District Council 31 revolves around the claim, by Illinois worker Mark Janus and two others, that anything any union does is “political” and thus violates his free speech rights by collecting “fair share” fees to pay for contract bargaining and grievances, and nothing more. The GOP Trump administration sided with Janus and the right-to-work crowd.

At the marches and rallies, speakers stressed the harm that could hit all workers if unions lose the money and power to defend all workers, and particularly those of women and people of color, who make up disproportionate numbers of government workers. Shuler noted 18 percent of all state and local government workers are African-American women, for example.

“Why is the corporate right wing trying to destroy us? Because they want more power, and they know preventing working people from joining together aids their power,” Shuler said.

She also stressed – and personalized –how vital public workers are to the nation and their families.

“This is about the single mom who relies on a union to let her bring home a decent wage to feed her kids. This is about a Fire Fighter who puts his life on the line” to run into burning buildings to rescue people.

And, harking back to the Valentine’s Day massacre by a 19-year-old gunman with an AR-15 at Marjory Stoneman Douglas High School in Florida, Shuler added, “This is about a Teacher who will have to wonder if she’ll have to do the same thing.”

The gunman killed 14 students, two teachers and the school’s athletic director. The teachers, both American Federation of Teachers members, died protecting their students.

“The forces that killed the two sanitation workers” in Memphis. Tenn., 50 years ago, whose deaths brought Dr. Martin Luther King there for the workers’ AFSCME organizing drive, “are the same goddamn people that every single day in this country fight unions and workers,” said Communications Workers President Chris Shelton. Their reason? “Greed, greed, greed!”

“This is the culmination of decades of attacks on working people by corporate CEOs, the wealthiest 1 percent and the politicians that do their bidding to rig the economy in their favor,” said Grace Catania, president of the Chicago News Guild-CWA, before a rally at Daley Plaza there.

“And you know that once they’ve destroyed public sector unions they will come after everyone else. The forces behind this case simply do not believe that working people should have the same freedoms and opportunities as they do.”

“We face perhaps the greatest attack in the history of unions,” AFSCME Local 1549 Executive Vice President Alma Roper said before the New York City rally. “We need to stand up and be strong.” Added local member Lionel Layne about the right-wingers: “They want to take away our voice.”

Unionists interviewed at the D.C. rally agreed with the speakers that all workers – union and non-union – would be hurt, and not just by a High Court anti-union ruling in Janus.

“Women, and particularly African-American women, make up a large portion of public sector employees,” added Carol Rosenblatt, executive director of the Coalition of Labor Union Women (CLUW). “A negative decision on Janus would be a disaster for them.”

“This whole thing is about dividing us. If they do, we have less of a voice,” added Teamsters Local 639 President Tommy Ratliff. “This is about their” – right-wingers’ and business’s – “political drive. They only worry about the 1 percent.”

“We’re urging our members to renew their memberships and getting the fee-payers” – the first to become “free riders” in a Janus decision – “to sign on, by talking to them 1-on-1 to educate them on the advantages of being union members,” English said.

“We gotta make sure this is not the last day of action, just the first day of action,” CWA’s Shelton declared. “And we need to make sure those sons-of-bitches in the Supreme Court understand this is a war and we are ready to fight, and we will win.”